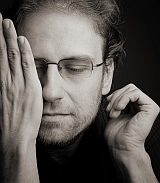 Musical versatility, combined with virtuosic performance and a good dose of humor. This is what best describes the double-bass player Georg Breinschmid on stage. On the 21st of September 2010, the musician granted the audience a deep insight into his own diverse musical world in the Viennese venue Porgy & Bess. On this night, the audience was able to experience the exceptional instrumentalist in three different formations.

Not too long ago, George Breinschmid was solely rooted in classical music. Born in 1973, he studied double bass at the Vienna Academy of Music and had already been active during this time  in various orchestras such as the Vienna Philharmonic and the Vienna Symphony Orchestra. Over time, however, it urged the Upper Austrian more and more towards jazz, where he expected to be able to develop artistically. A decision, which would soon prove to be right on the money. To this day Georg Breinschmid has revealed an extraordinarily wide repertoire of tonal expression. As a musical free spirit and because of his openness to other musical styles and forms, it is a simple matter for him to mix and arrange things that, at first glance, would not appear as compatible. It is often the experiment with opposites and the attempt to break with traditional listening habits.

As part of the evening at the Viennese Porgy & Bess, the public had the rare opportunity to experience the double bass player from different perspectives. Brein’s Cafe is maybe the best example of the musician’s tremendous versatility. Together with the violinist Roman Janoska and his brother Frank at the piano, Georg Breinschmid tried to unify different styles such as polka, classical music, and jazz with oblique Balkan rhythms, whereas the repertoire of the compositions ranged from free improvisations to one or the other newly updated classic.

In the joint project with his longtime friend and musician Thomas Gansch, George Breinschmid shows his virtuosic side. The two have known each other from their time together at the Vienna Art Orchestra, where they often concluded the program with the musical finale. In addition to their special playing abilities, both instrumentalists distinguish themselves by their enormously wide range of styles and their distinctive understanding of music. In their projects, the two brilliant musicians take on different roles and sometimes act as traditionalists, sometimes they dive deep into the realms of improvisation, sometimes are devoted to world music, and then again find themselves in crossover music with pop and blues.

Boundaries are also absent in Breinschmid’s “Who is Ivica Strauss?”. Together with the violinist Sebastian Gürtler and accordionist Tomamso Huber, Breinschmid tries to build bridges. In contrary to the opinion of traditionalists, Breinschmid does not look at jazz and classical music as closed systems, but as open fields. With a lot of wit, the trio let unexpected musical symbioses arise, which are carried by polka and waltz-like rhythms, and result in a coherent whole.

Self-confessed jazz lovers should be sure not to miss a Georg Breinschmid concert and can certainly expect an evening full of intriguing musical styles and moods and an unforgettable listening experience.