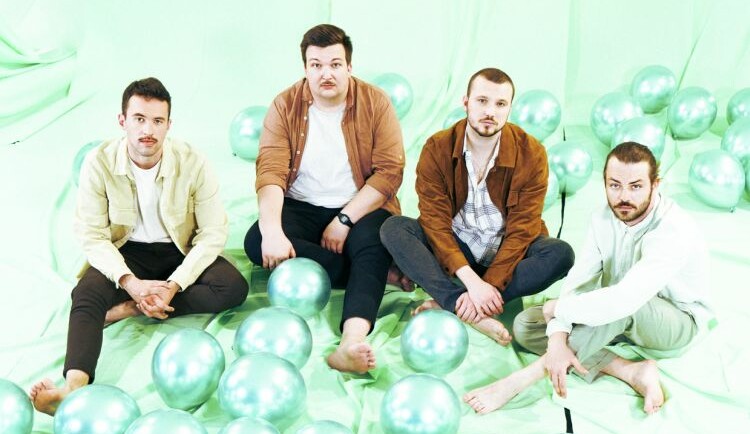 Salzburg-based indie rock band PLEASE MADAME have just released their third album. “Angry Boys, Angry Girls” has 13 new tracks which, unlike the previous album, are more thoughtful in nature, but reflect the band’s trademark, i.e. their motivated and enthusiastic spirit. Clemens Engert spoke to DOMINIK WENDL (vocals & guitar) and LAURENZ STRASSER (guitar) about the appeal of ambivalence, songwriting retreats and video shoots in a familiar atmosphere.

You describe the feeling of anger as the overriding theme on your new album. Would you call the album a concept album?

Laurenz Strasser: That would probably be taking it a bit too far. But we still want to show with the album that you can draw a lot of motivation from the feeling of anger. Anger can also lead to positive emotions.

Dominik Wendl: I think that some parts of the album are indeed very conceptual. We don’t see it as a concept album à la Pink Floyd, but we consciously wanted to create a common thread from beginning to end.

What were the issues that made you angry during the creation of the album?

Dominik Wendl: We started working on the album when the black and blue political coalition had just begun to govern, and that made me very angry. Later, of course, the pandemic arrived. In this context, I was particularly annoyed that there was a lot of talk about the economy, but very little about the human aspect of it all. There are so many things to be angry about at the moment: Climate change, of course, or everyday racism, or the position of women in society. Each of these issues is dealt with in some form on the album.

Where do you see the main differences to your last album?

Laurenz Strasser: With the last album, it was important to us that it had a strong live character and that there were no frills. This time we also worked a lot with synths or incorporated orchestral arrangements. which simply led to a wider range of instrumentation.

Dominik Wendl: Yes, keyboard instruments became much more important and also the guitar has a slightly different function than on our earlier albums. This time it was less about putting many guitar layers on top of each other, but rather to use the guitar specifically as a lead instrument at certain points.

Were there any new musical influences that accompanied you in this development?

Laurenz Strasser: Our old favourite bands like Kings Of Leon or Arctic Monkeys were often listended to during the sessions, but there were also many new influences.

Dominik Wendl: Yes, we also listened to techno or hip hop, for example. We are very open anyway and don’t want to limit ourselves to indie music – just because we might be an indie band. I think you can also hear that on the new album, we just wanted to make cross-genre music.

You combine a more poppy, positive vibe in the music with critical, thoughtful lyrics in some of the songs on the album. Do you like the concept of ambivalence?

Laurenz Strasser: I think that if you put rather “negative”, critical lyrics into a sad or minor-key musical setting, it can often be too striking. If there’s a certain ambivalence between lyrics and music, that can have a very exciting and refreshing effect.

Dominik Wendl: There are definitely individual songs where the lyrics and music are going into a similar direction, but basically we do like variety and ambivalence.

You have documented the creation of the album on YouTube. Among other things, you went on your own “songwriting retreats” together.

Laurenz Strasser: We knew that we are most productive when we deliberately take our time and also isolate ourselves a bit. That’s how the idea of the songwriting retreats came about. Concentrated work is easier in a remote cabin than at home in a familiar environment.

Dominik Wendl: By the way, this YouTube documentary was in parts a real struggle because it was difficult to constantly shoot everything. But in the end we are glad that we did it and there has already been a lot of positive feedback.

You also talk about moments of frustration in these making-of videos – which ones in particular?

Dominik Wendl: In the song “Mary-Ann”, for example, we always had this hookline – but we never found the right arrangement for it. I think we went through 15 different versions until we had a final one. Of course, the cancellation of shows we had planned for last year also belongs to the moments of frustration.

Laurenz Strasser: We actually wanted to release the album last year. But that wasn’t an option for us, because we really wanted to perform the songs live right away.

There are already videos for six songs on the album. How do you come up with the ideas?

Dominik Wendl: We work with different video producers who all have their own style and that suits us very well.

Laurenz Strasser: Of course we are also bringing in our own ideas. For the video for “Mary-Ann”, for example, we had our sisters perform instead of us. The shooting was really fun because each sister can be seen playing her brother’s instrument, so to speak.

Dominik Wendl: (laughs) We even taught them a few fingerings. I think they did a really great job – considering that they don’t actually play the instruments themselves. The basic idea behind the video was that our sisters are able to tell this story about feminism in a much better way than we can.

You have a packed tour schedule in autumn.

Laurenz Strasser: Of course it will be a bit exhausting, but we simply haven’t been on the road at a stretch for so long that we are very much looking forward to it.

Dominik Wendl: Yes, we can’t imagine anything better at the moment than being on the road. We’re just looking forward to being around people again and meeting all the people who are coming to our concerts.