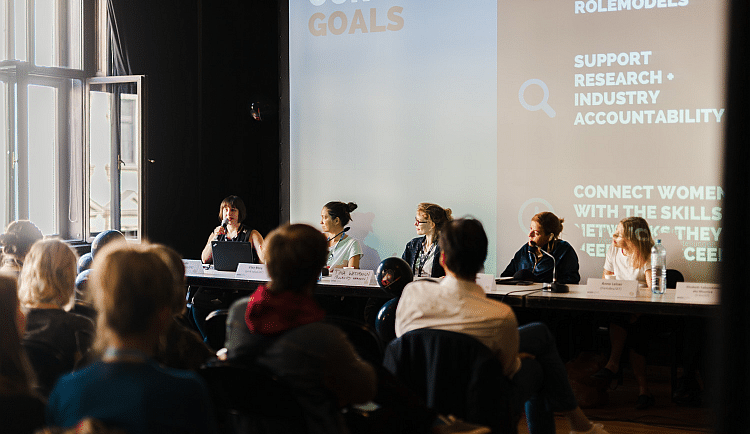 “PRETTY GOOD, FOR A WOMAN”

Femdex, pink noise, RockCity, We Make Waves – just a few names of female projects emerging in the still male dominated music business. The discussion therefore focused on representatives of these platforms in order to create visibility and focus attention on positive developments. The protagonists from a wide range of different areas quickly agreed: to bring about change, it is above all a matter of building networks and bringing them into contact with each other. Not coexistence, but togetherness. Building such networks is the key to success in bringing women together internationally and beyond traditional borders, providing opportunities for exchange. Workshops and discourse programs in particular can strengthen the community and create empowerment. And yet the different platforms must always defend themselves, and continue to answer the question “why there are networks for women at all, because who needs it?”

“THERE ARE NOT ENOUGH WOMEN TO BOOK”

When asked what the trigger for the various initiatives actually was, it quickly became clear that it was not any single event, but rather many individual incidents from everyday life, which were repeated and accumulated over the years. This ultimately resulted in a feeling of inferiority, a situation made worse by the invisibility of female role models or CEOs within the music business and beyond. For this very reason, pink noise – Verein zur Förderung feministisch popkultureller Aktivitäten under the direction of Elise Mory, for example, is trying to overcome these traditional structures through actions, such as the annual Girls Rock Camp. In the course of this event, girls are encouraged to play in a band, to move confidently on stage, to question the classic band structures through joint project development and to sit down behind the drums.

“Music has always been a tool of empowerment for the most disadvantaged members of society, whether overtly political or not, song is a symbol of hope and freedom” is an excerpt from the concept of We Make Waves, a showcase festival and a conference for women and non-binary identities within the music industry, which presented its first edition in Berlin in November 2017 and is another example of active change. The main focus is on networking, discourse and mentoring.

The fact is, however, that the contemporary music business is still defined by structural sexism, something which is particularly evident in the club and event sector. Standard excuses are encountered here with insipid statements for non-existent problems such as “There are not enough women to book”. This classic self-defense used by bookers, promoters and label bosses, paints a different picture than is already the case in reality, be it out of ignorance or disrespect. Platforms such as Femdex and female: pressure have in the meantime proven the opposite in the form of a database and a concrete visualisation. So it’s long past time to find a new excuse.