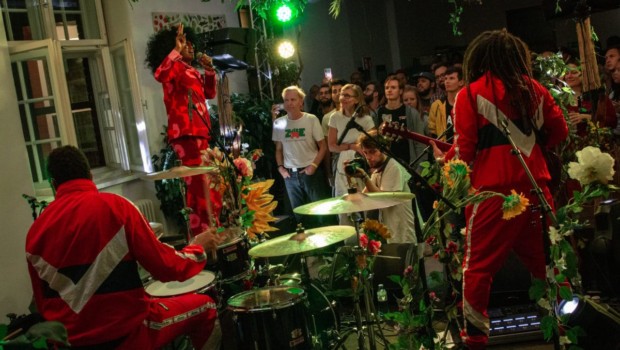 Where new houses are built, new neighbours move in. When old concert halls are next door, conflicts are inevitable. That doesn’t have to be the case. On the first day of the Waves Vienna Conference 2019 a panel introduced the principle “Agent of Change”. Agent of Change says that the person or business responsible for the change is responsible for managing the impact of the change. This means that an apartment block to be built near an established live music venue or club would have to pay for soundproofing. Alan Miller from the Nightlife Industries Association London gave input on the topic discussing with Astrid Exner from WUK and Peter Dobcak from the chamber of commerce Vienna, whilst Lucas Knoflach from Sound Diplomacy was moderating.

Half the world is jealous of Vienna when it comes to housing construction. When flats are built, some of the world’s metropolises are already building on a principle that prevents new neighbours from driving out old cultural offerings. London knew the problem too well. A series of locations in which local music scenes had grown up closed down. A task force investigated why this was the case. They came to the conclusion that high rents, high property taxes, high requirements and, last but not least, inadequate urban planning were to blame. Mayor Sadiq Khan changed what he could change, that was first of all, urban planning. Whenever construction was done near small music venues the developers had to comply with a strict sound insulation. Since then the shutting down of music venues has declined. Alan Miller (Night Time Industries Association) informed us that London does it that way. New York, San Francisco, Manchester, Mumbai and even Victoria in Australia as well. The principle is called “Agent of Change”. Vienna lags behind. Austria lags behind anyway. And, to be fair, one has to say that the idea just started to get around in the German-speaking world.

Martina Brunner talks a lot about it. With the initiative “N8BM” she loudly advocates that the club culture in the federal capital should be given more attention. She has written her bachelor thesis on the night major subject, recently submitted a petition and, together with numerous supporters, she is calling for a service and mediation point for Vienna. To implement this idea, she’s meeting responsible persons from political parties, chambers and agencies, organizes panels bringing international experts to Vienna. This was also the case on the first day of the Waves Vienna festival. Alan Miller, Peter Dobcak (Chamber of Commerce), Lucas Knoflach (Sound Diplomacy) and Astrid Exner (WUK) sat in front of a full house in Vienna’s WUK. “The new emergency lighting and the renovation of the electrical systems alone cost 850,000 euros,” Astrid told about the daily worries of the cultural centre that is more than one hundred and sixty years old. “We have a very good sound insulation. The people in the courtyard are usually not a problem. But sometimes they are. That’s why all our neighbours have our contact details. Many are actually proud to live nearby“. However recently, an attic has been built up in the vicinity, and since then complaints have been coming in.

The problem of inner-city displacement was not a problem in Vienna for a very long time. After all, Vienna downsized ever since the Danube Monarchy had broken apart. In the seventies the Arena, WUK and Amerlinghaus could be occupied relatively easily, the rents had hit rock-bottom, there was plenty of space. That has changed. Vienna is growing upwards and beyond the Danube, construction is also taking place near the Arena, old wastelands are being cleared, most recently this is happening around the area of the Nordbahnhalle [the Northern Railway Hall, note] – a building made available for cultural uses for a limited time only. After that time some cried out SOS that this project had to be preserved after all. Such calls are often mixed with complaints from residents. Such conflicts can also affect established locations, bothering not only the locations, but also politics, administration and, of course, the neighbours. The more indispensable a location has become, the more concessions it usually gets. “Agent of Change”, on the other hand, offers a long-term solution besides vitamin C [C for “contacts” , note of the translator].

“Even if you don’t live in the same building “Agent of Change” is great news,” says Alan Miller. “Where it’s iimplemented, the complaints go back.” Miller admits that there is a need for additional measures. You have to bring everyone together, the police, public officials, politicians and of course the neighbours, you have to approach everyone, involve them, provide positive stories about nightlife to change mindsets towards these places. “I love the concept of ‘Agent of Change’,” said Peter Dobcak of the Chamber of Commerce right at the beginning of the discussion. He sees a lot of calls coming to the city council regarding the new smoking regulation, some restaurants would probably have to shut down, he believes. He therefore has limited areas in the city in mind where noise would be accepted, while in other areas the usual nocturnal peace and quietness for local residents would apply. He can even imagine 24-hour licenses.

“Agent of Change” certainly is no panacea. In Vienna it would have only partially worked in case of problems. When, for example, a rooftop bar in the high-rise building in Vienna’s Herrengasse had to close prematurely this year, it would have been necessary to obtain an operating permit with appropriate noise protection. After all, the bar was new to the house. The Sub in Storkgasse celebrated parties in an existing building and accordingly had to shut down pretty fast after it’s opening. Also at the Donaukanal the ways of bass-frequencies are untraceable. Adria, Grelle Forelle and Strandbar Herrmann experienced this painfully and had to turn down the volume of their open-air areas. The argument that thousands of cars thunder along the Danube canal every day did not catch so far. And then on the other side there are places like the Volksgarten Pavillon. For countless summers they have been DJ-ing there. This autumn the magistrate limited the volume to the level of a bicycle bell. A single neighbour was to blame, the future is uncertain.

“You need to convince them with the argument that a city needs areas in which a 24-hour economy is alive,” Alan Miller told those present. “You need to fight and convince people.” From the vibes in the room you almost wanted to believe that together this was possible.

Stefan Niederwieser – translated from the German original by Julian Schoenfeld