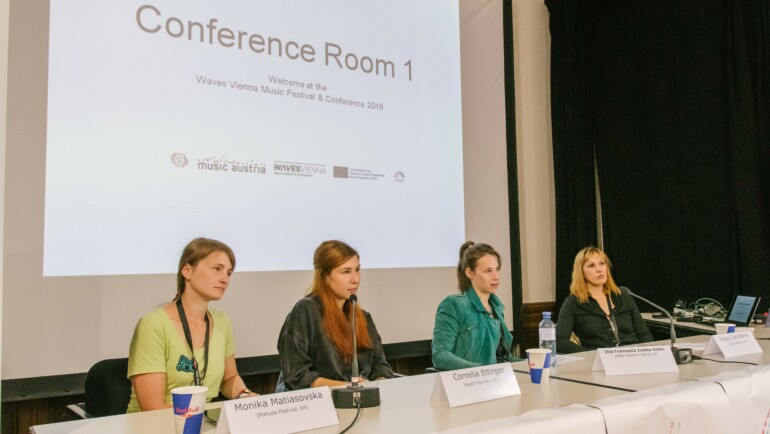 End of September the WAVES VIENNA CONFERENCE 2019 gathered international music experts for talks on current topics, workshops and presentations. On the second day of the conference the debates were partly heated in Conference Room 1. This article sums up the panels “Banning Content of Dubious Performers – Moral Censorship or Acceptable Regulation?”, “Women in Live Music Production” and provides insights into the results of the “CEEMID Music Professional Survey for 2019”.

“Rock ‘n’ Roll is about transgression, Michael Jackson has sung that he is ‘bad’, his life was tragic, and Freddie Mercury was tremendously pedophile,” Ivan Novak, who co-invented Laibach in the early 1980s, said in his opening statement. On this Friday afternoon, there were many points raised that were not legally “waterproof”. In the controversial discussion on how to deal with the music of dubious artists, the different opinions were pretty strong. In the end, there was minimal consensus. The only point beyond dispute was that there should be penalties if criminal offences were committed. Following that the consensus ended. “Morals aren’t always a good advisor”, said Karl Fluch of the newspaper Der Standard. “Evil is attractive, otherwise art would be boring as hell”. That’s why he’s against banning Michael Jackson from the radio.

The artist Maria Scharl stood alone against the dominance of the old, white men. When the presumption of innocence in the case of sexual harassment was raised, she argued that the number of men wrongly accused of sexual harassment is extremely small. Those who are not banned from the radios and streaming platforms in case of suspicion continue to earn money and can continue to negotiate confidentiality agreements. It has been proven that other women report sexual harassment too once the wall of silence has been broken down. Maria Scharl is a clear-minded artist. She has made pink flags for the Poolbar Festival with the names of dubious artists written upon them, even if, like David Bowie and John Lennon, they have never been convicted. There is an edition of her work “Not Your Heroes” with names of artists convicted by the courts. “When you have money, you can silence women,” she said.

Karl Fluch on the other hand argued for unconditional artistic freedom and to separate between the artist´s work and the author. Otherwise hell would reign on earth, artistic incest, and in the end everything would sound just as boring as Christian rock. “You can’t always be in a safe space”, agreed Ivan Novak. “It’s a jungle, it should be a jungle”, he said at the end. And he seasoned his statement with a quotation from Mao Zedong that one should let one hundred flowers bloom. He concealed the fact that – after the brief phase of social opening initiated in this way in China – thousands of regime critics disappeared in labor camps. The impression remained that there was only music that was either borderline or politically totally correct. The spectrum in between was somehowleft behind.

“That’s my son, by the way”, Monika Matiasovska (Pohoda Festival) remarked, so that the audience in the hall knew whose baby was crying loudly next door. At the Waves Vienna Conference one talked about the status of women in live-music business. In the auditorium mainly women were present and perhaps that’s why the discussion took some unusual turns. Why only women sat on the podium and spoke to women, the audience muttered. O had to talk to men, to make them aware of the obvious problems women are facing on and behind the stages. Only then something could be achieved. One woman added that she was fed up with panels where there are only women discussing. “Please invite us so that we can change our attitude”, Peggy Szudlarek (dif productions) told the audience and gave insights about a conversation she had with a man who had invited almost no women at all to a series of events for a long time. She added, that five years ago many men would not even have accepted an invitation.

There was speculation as to why women who had been in business for some time often displayed such a caustic attitude. “That’s me!” shouted Peggy Szudlarek. When she started working, women’s careers in music business were very unusual. So she had to prove herself twice as much. But at the same time the market is becoming more mature, the culture is changing, Monika Matiasovska mentioned. Each year there is less screaming at each other behind the scenes at the Pohoda festival– both from men as from women.

“I like working in mixed crews. Men too say it’s good to have women on the team,” says sound engineer Cornelia Ettinger. “Gender doesn’t matter as long as people are open-minded”. Yet she has often been shown the way to the merchandising stand in locations where she worked for the first time. She thought then, to do a good job would be best and as such prove these people wrong. In the end, she and Itta Francesca Ivellio-Vellin (Sofar Sounds) gave the attendees tips on which platforms women could exchange ideas online. For example on Sound Girls, Music Women Austria, Female Pressure and Frauendomäne.

At the end of the conference, Daniel Antal of CEEMID – short for Central European Entertainment and Media Industry Databases – presented the results of a comprehensive study on the Central European music market, including the fact that Spotify has never granted access to such large amounts of data before. In addition to Open Data and data from Google, over two thousand people from the music industry were surveyed. The results are quite surprising. Only very few songs from Austria make it into the Spotify charts of other countries. The share of domestic music in streaming is lower here than in any other country surveyed. Music exports usually go to neighbouring countries.

The whole report including animated graphics is available on Daniel Antal’s website.

Stefan Niederwieser – translated from the German article by Julian Schoenfeld.