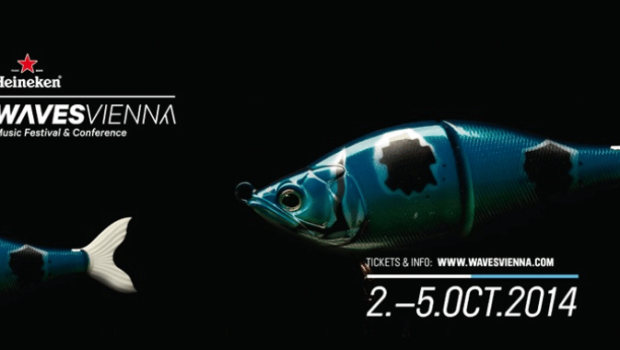 Keynote address by Keith Harris; Panels focus on the “Future of Music”

Four years ago, Austria’s already festival-rich landscape gained a further figurehead when the first Waves Vienna Festival & Conference took place in the country’s capital city. In the years since, the international festival has continuously expanded its scope, while remaining true to its original theme of “East meets West.” From October 2. – 5., 2014, more than 100 concerts will take place at 12 venues throughout the historic city center of Vienna, with an additional 70 acts performing in the neighboring capital of Slovakia, Bratislava. This will be the second time that the festival expands to include Bratislava as a second club and showcase festival hub.

One of the very unique aspects of the Waves Vienna Festival & Conference collaboration between Vienna and Bratislava is that nowhere else in Europe are two capital cities located in such close proximity to one another. Apropos of “waves” – it is the Danube River that connects the two cities: a one-hour boat-ride on the “Twin City Liner” along its majestic waterways covers the 50-mile distance in style.

The Waves Vienna Festival also includes an industry Conference , which is organized by Waves Vienna and Austrian Music Export. With a total of 811 delegates, last year’s conference saw a 54% increase in attendance compared to 2012, and the 2014 conference is expected to grow even further. The conference will take place from October 2nd to October 3rd 2014.

The keynote address, “The Future of Music Management,” will be given by music industry legend Keith Harris, and further speakers will include producer and manager Peter Jenner (UK), music journalist and consultant Allan McGowan (UK), Kristin Thomson of the Future of Music Coalition (US), and agent, manager, and label exec Robert Singerman (US).

This year’s conference will focus on subjects such as revenue from sales, creating successful festival line-ups, and touring in remote regions as a formula for success. The panels will include topics such as “Can Musicians still Make Money with Recordings?” that question whether or not musicians see any of the still substantial money to be made through sales and music streaming, or “Off the Beaten Track” where the idea of artists doing well in remote locations and smaller markets is evaluated in terms of successful strategies. “How to Create a Successful Festival Line-Up” provides an opportunity to hear international presenters discuss their best-practice models.

A further focal point of this year’s symposium will be the two guest countries Croatia and the Netherlands. The conference will host panels and sessions on these music markets and their specificities, and will feature speakers and delegates from the two countries.

The popular Feedback Sessions will be continued at this year’s Waves Music Conference, and expanded to include new formats. A select group of artists performing at the Waves Festival will be chosen by a jury to receive individual and constructive feedback from industry experts. For the first time, international journalists will also be presenting their favorite performers in a panel at the 2014 conference. Furthermore, separate sessions will be held for electronic and pop/rock bands from the two guest countries and Austria, which in turn provides performers an additional opportunity to reach industry participants and expand the audience for their showcases at the festival.

The conference provides the international music business – opinion leaders, festival and concert organizers, labels and publishers, managers and media representatives – ample opportunity to interact, and to discuss industry-related issues in a series of keynotes, panels, and workshops. October 2nd, the first day of the conference, will take place in Vienna, at the University of Music and Performing Arts Vienna (Anton-von-Webern-Platz 1, 1030 Vienna, Austria), in collaboration with and alongside the 5th Vienna Music Business Research Days. The second and final day of the conference, Friday, October 3rd, will take place in Bratislava. The two conferences will be open to delegates of both events, providing opportunities for networking meetings and mutually inspiring exchanges between the music industry and academia.