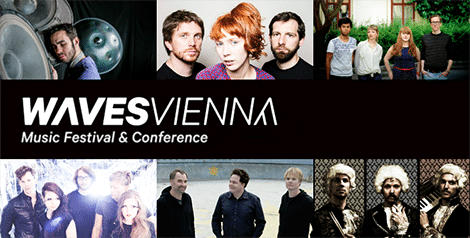 For five days this coming October, the international music industry will once again convene in the cities of Vienna and Bratislava to attend one of the world’s most cutting-edge industry get-togethers and networking events: the Waves Vienna Festival & Conference. The festival’s showcase concerts are open to the general public – providing ample opportunity to discover exciting new performers from around the world. From October 2. – 5., 2014, more than 100 concerts will take place at 12 venues throughout the city of Vienna, with an additional 70 acts performing in the neighboring capital of Slovakia, Bratislava. Several Austrian acts will be among the countless international newcomers performing at this year’s installment of the festival, including Manu Delago, Schmieds Puls, DAWA, Giantree, Villalog, and Johann Sebastian Bass.

Percussionist Manu Delago has accompanied Björk on her world tours during the past years; he has also recently finished touring with sitar-star Anoushka Shankar, and has performed with the London Symphony Orchestra, and Norwegian Jazz legend Bugge Wesseltoft, to name a few. The instrument Manu Delago plays is the Hang, a UFO-like sphere not unlike two woks glued together: his virtuosity has earned him the nickname “wokstar”, though he is generally referred to as one of, if not the world’s best Hang-player. He will be performing with his trio formation Manu Delago Handmade at this year’s Waves Vienna Festival & Conference, as well as at this year’s Reeperbahn Festival, in Hamburg, Germany, on September 19th.

Soft spoken 25 year-old Viennese singer and guitarist, Mira Lu Kovacs, and her trio, Schmieds Puls, have recently burst onto the Austrian scene like a breath of fresh – yet wistful – air. Of the title track of their eponymous 2013 debut album, “Play Dead” (here is a recent acoustic version: , Austrian music critic Andreas Felber said: “Rarely has such a dark, melancholic song been sung by such a bell-like, weightless and yet haunting voice.” Though their sound is clearly influenced by the likes of Ani DiFranco, and Feist, this guitar/double-bass/drums trio has a distinct jazz background: all three members studied jazz, and are associated with Vienna’s groundbreaking Jazzwerkstatt.

The young Viennese acoustic-folk-pop formation DAWA made a huge impression when they released their debut album “This Should Work” last year. Named after their lead vocalist, John Dawa, this guitar-cello-vocals-percussion combo sometimes even include a cajón in their instrumentation. They have supported Milow and The Cranberries, just completed a tour of Germany, and established a strong fan base along the way. Combine Tracy Chapman and Jack Johnson, include a healthy dose of soul, throw in a remarkable talent for creating intimacy on stage, regardless of whether they’re performing in front of 10 or 1,000 people, and you get DAWA.

The indie pop quintet Giantree was founded by Viennese brothers Hele and Roland Maurer four years ago. Their oftentimes melancholic sound is strongly reminiscent of nordic 80s synthie-pop groups, and while their 2012 debut album “We All Yell” was still heavily influenced by the likes of Arcade Fire and The Naked and Famous, Giantree have progressed to an increasingly danceable sound with their latest offering, the 2014 EP “Densest Blacks.” They have conquered the Austrian indie charts, toured extensively through Austria, Germany, and Switzerland, and have become a fixture of the Viennese and Berlin club scenes.

Austrian Techno-Dub-Disco-Krautrock veterans Villalog will also be performing at this year’s Waves Vienna Festival & Conference. Originally founded 16 years ago as a duo, Villalog soon added electronic-pioneer Bernhard Fleischmann (aka b.fleischmann) on drums, and they have performed mostly as a trio since. While their sound hearkens back to the glory days of the 1990s Viennese electronic scene, they have refined it in the years since, with each band member also working on their own individual projects. Villalog’s first album in five years, „Space Trash“, is due out any day, and their performance at Waves will provide an excellent opportunity to experience these masters of ambient sound at work.

In keeping with their name, the members of young Viennese electronic band Johann Sebastian Bass perform in full “neon-baroque” regalia – powdered wigs and all. What may at first glance seem intended as homage to their Austro-pop forebear, Falco, and his hedonistic alter ego, Amadeus, is quickly revealed as its very own phenomenon: “electrococo”. This young funky synth-pop trio (think Prince meets Daft Punk) whose official band-bio mentions their thwarted assassination attempt on French King Louis XV and subsequent time-travel to today’s Vienna, will be premiering their eagerly anticipated debut album at this year’s Waves Vienna Festival & Conference.

The Waves Vienna Festival also includes an industry Conference, which is organized by Waves Vienna and Austrian Music Export. The conference provides the international music business – opinion leaders, festival and concert organizers, labels and publishers, managers and media representatives – ample opportunity to interact, and to discuss music-related issues in a series of keynotes, panels, and workshops. October 2nd, the first day of the conference, will take place in Vienna, at the University of Music and Performing Arts Vienna (Anton-von-Webern-Platz 1, 1030 Vienna, Austria), in collaboration with and alongside the 5th Vienna Music Business Research Days. The second and final day of the conference, Friday, October 3rd, will take place in Bratislava.