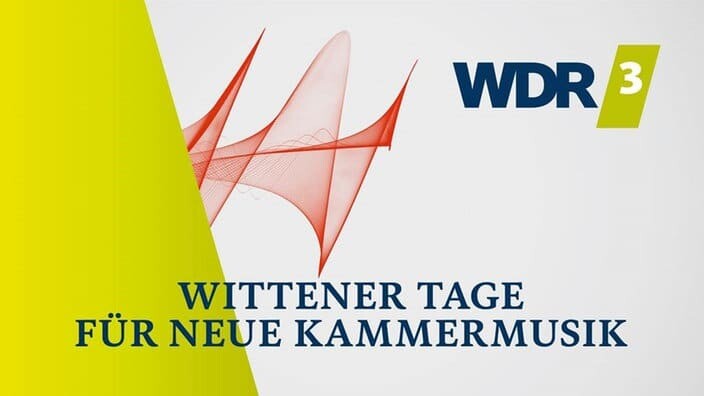 In its 53rd edition the Wittener Tage für neue Kammermusik (Witten Days for New Chamber Music) will take place from the 23rd to 25th of April, 2021. 30 world premieres by composers from 15 nations will be performed from April 23rd to 25th by soloists, ensembles and the WDR Symphony Orchestra, on stage, on the radio or in new, hybrid formats.

“That future seems irrevocably lost, but its spirit haunts us.” This is the statement by composer Mauro Lanza to his new Witten String Quartet. It is a path that back to a future that is aging as fast as the hype about new technological developments. In the second year of the pandemic, faith in the power of the spirit that can turn impracticable plans into new, perhaps still feasible models for the future, is more important than ever. In any case, the festival spirit remains alive. That is why the Wittener Tage für neue Kammermusik will also take place in 2021.

It is about the unbroken energy that emanates from supposedly lost visions.

The living spirit will show where the journey is headed. This weekend of contemporary music is about more than just music. It is about the unbroken energy that emanates from supposedly lost visions. A highlight from this year’s festival is an audiovisual synthesis by Austrian artists Klaus Lang (composer) and Sabine Maier (light artist). Lang’s sounds will move in a world of light, whose aesthetics stem from old devices that have been overtaken by technological development.

In its 53rd year, the festival, which is jointly organized by the city of Witten and WDR, is venturing into unknown territory, including musically unexplored territory, with a series of sound art works, installations and performances in Witten’s Schwesternpark (Nurses Park). This urban gem is one of the city’s most beautiful green spaces. This well-kept insider tip is a labyrinth-like place that invites visitors to stroll and pause. Created around 100 years ago, the park was originally used for the recreation of nurses. The lovingly designed small landscapes were intended to remind the women of their respective homes. With their works, sound artists now reflect the flora and fauna, but also the special acoustics of the nurses’ park. There you can discover mobile chamber music, theater, dance, audio pieces and sound art by dozens of composers, including Peter Ablinger. Further program highlights include works by Bernhard Gander and Mirela Ivičević. This year’s performers of the new works include Klangforum Wien. The radio evenings on WDR will be devoted to new chamber music throughout the weekend, during which they will be broadcasting the concerts, performances and sound installations, accompanied by reports, essays and artist talks live or in real time.

Link to this year’s program (in German): here.

PETER ABLINGER Warteschlange, Labyrinth (Among others)

Program changes are possible until the end of April due to the Corona pandemic. All current information can be found at www.wdr3.de and www.wittenertage.de.