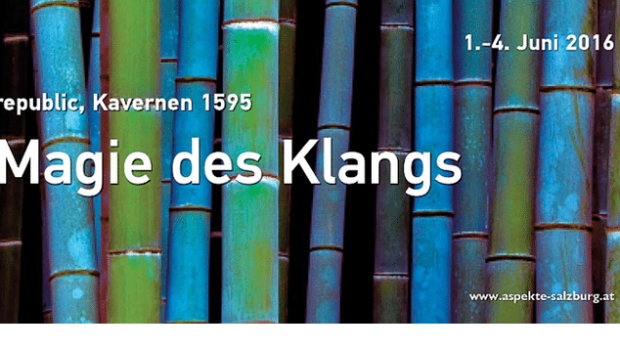 Founded in 1977, Aspekte Salzburg celebrates its 40th Anniversary this year, focusing on the French composer Tristan Murail, one of the most important representatives of spectral music (Musique spectrale) to emerge in the 1970s in Paris around the Ensemble l’Itinéraire. The composer in residence is highlighted by selected works drawing an imaginary axis between Paris, Salzburg and New York.

The opening will be performed by the Mozarteum Orchestra under the direction of Peter Tilling with two Reflections / Reflets by Tristan Murail, a Violin Concerto by Henri Dutilleux and a world premiere from Klaus Ager ( “14 verses to forgotten Elegies”). Frank Stadler will play solo violin.

On June 2nd the exxj (Ensemble XX. Century) will play a premiere of the Salzburg composer Christian Ofenbauer as well as works frmo Liza Lim, Julia Purgina, Klaus Ager and of course Tristan Murail. June 3rd is dedicated to the oenm. Austrian New Music Ensemble; featuring works of contemporary French music from the composers Pascal Dusapin, Vasiliki Krimitza, Matthias Leboucher, Gérard Pesson and Mark André. The ICE (International Contemporary Ensemble New York) and the Ensemble L’Itinéraire merge for the final concert on June 4. At the center is the work Liber Fulguralis, a “création commune” whose musical and visual components have been developed simultaneously by Tristan Murail and Hervé Bailly-Basie. Inspired by the ancient oracular art of lightning divination, the work unfolds in just under half an hour as a poetic exegesis of one of the most fascinating natural phenomena.

The Aspekte Playrooms (aspekteSPIELRÄUME) feature winners from the contests Prima la Musica and Young Composers who will introduce new music to the caverns from young performers and composers. A highlight of the akpekte-mediation work, which has enjoyed great popularity over the years.