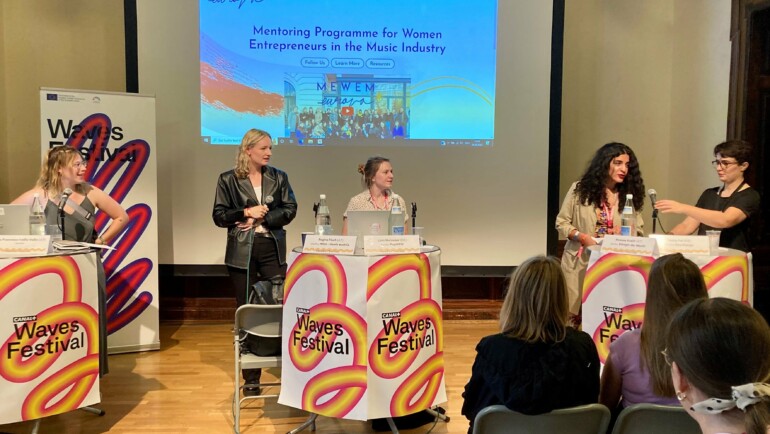 “FLINTA networks help through empowerment; they support, impart knowledge and make FLINTA individuals visible,” states Lynn Meissner of Pop NRW – not without the preface that despite already existing FLINTA networks, there is still a long way to go. After all, the gender pay gap is 19 percent in Germany and 25 percent within the music industry. Market research and insights into statistics were also the arguments that led to the founding of Keychange, an initiative for gender equality in the music industry and event world. Vanessa Reed founded the Women Make Music fund ten years ago in the UK, which at the time was the only fund from a public institution (PSR Foundation) specifically aimed at women. Above all, the fact that mainly people with male identities were applying for scholarships, which subsequently led to a deficit in diversity, showed the necessity of the initiative.

Music Women Germany, a large network and nationwide umbrella organization in Germany with its own database, also relies on the effectiveness of facts and figures. “We don’t know that many qualified women or FLINTA people” – a regularly heard statement -can be countered with the figures in the database. It makes it easier to find the right people locally – from organizers to musicians, technicians to producers. At the same time, the database provides visibility. The idea is to establish a network in each of the sixteen federal states in Germany, because it is also about spatial proximity. Music Women Germany advocates for a music culture and economy that is multifaceted, diverse, digital and networked.

Marie Fol, an independent consultant, researcher, cultural manager and project manager at Keychange, explains the goal of the “Talent Development Program (TDP)”: “The aim here is to form a community in which it is ensured that women and gender minorities can come together. Bringing 75 people who previously felt underrepresented in their communities into a room together for the first time is a magical moment every time, she says. The recipients are told: “We have hand-picked you because we know what you’ve been through, but you will grow,” which then elicits responses like: “I am a weirdo, but you’re a weirdo too. That’s so fucking cool! Let’s do some stuff together.” This is where Fol says you see the power of the network particularly well. It helps tremendously to see that you’re not alone in what you’ve been through. It helps to find allies – and later to meet people outside the network who recognize the value of a more diverse music industry.

Marie Fol sees Keychange’s success in creating a space for women and gender minorities without it being primarily tied to expectations – e.g., to produce or perform something. In parallel, other Keychange programs are working to link these protected spaces to the music industry. The latter is done through a presence at music events and festivals – such as Waves Vienna or the Reeperbahn Festival. “We’re all about expertise. We are part of the discussion because we are part of the music industry.” This combination is highly appreciated by all participants, he said.

If you look at the music industry as a whole with its various fields of activity, women and FLINTA people are definitely active. But as soon as it comes to how many women are in leadership positions, it becomes thin. Regina Fisch, project coordinator at MEWEM Europe, among others, hereby addresses the issue of structural inequalities. The EU project aims to get more women into leadership positions. “Our hope is that clubs, festivals and their lineups will become more diverse when FLINTA people are in power.” At the heart of MEWEM is mentoring, where FLINTA individuals who have already gained initial experience in the music business are matched with a mentor, and supported on an individual level in their further development. In parallel, a program consisting of workshops and participation in festivals and conferences, in running to create a framework.

It is noticeable that in the course of the discussion, it is increasingly about a lack of diversity in the music industry rather than about FLINTAs alone.

“It’s not about taking something away from someone, it’s about making space for others.” This challenges the status quo, the patriarchy, our models of work and life, etc., Marie Fol explains. We all have a tendency to seek out exactly what is similar and familiar, she says. As soon as you talk about boards and selection processes in which only white men sit, this creates a bias. So you have to start there, too, and change the composition of committees if you want to create a culturally diverse musical landscape – and that includes leadership positions.

Myassa Kraitt is an artist, educational anthropologist and trainer who brings her expertise to D/Arts – Project Office for Diversity and Urban Dialogue, for example. Her alter ego, “Königin der Macht” [note: Queen of Power] is a vocal female-queer-radicalist rapper. She has developed this very direct character, she says, who exposes violent spaces. Cultural institutions in particular can also be very exclusive. The project office D/Arts, which she also represents on this panel, cultivates a critical concept of diversity and develops dialogic concepts to create de-centralized strategies and collaborative thinking spaces. “How can we build bridges between cultural spaces and artists?” Each of us has multiple identities, not just one.

What can artists contribute to this discourse themselves? Performances by FLINTAs are attended by FLINTAs. Can cis men be included? Myassa Kraitt has a clear stance on this: “No!” – arguing that the available safe spaces and stages are so rare. She does have a fanbase of straight cis men who attend her performances, but has decided for herself not to take on the role of instructor: “Be your educator? No!”. This, she said, is not just about education, but a general willingness to share power and see structural inequities. “FLINTA voices, especially in art and music, are so scary because they are located outside of established positions. FLINTA-voices, especially in arts and music, are so anxiety provoking because we do not speak from a structural space. We don’t speak from a position that suggests, “you can navigate the path with us.” This triggers anxiety. “I am a person who expresses vulnerability and power. And I want to reach out and share with the communities I feel I belong to,” concludes Myassa Kraitt.

Itta Francesca Ivellio-Vellin summarizes that it is quite legitimate to claim ‘safer spaces’ for FLINTAs because there is a need. However, how can the others, non-FLINTA people, now be involved and convinced that this issue is not only about FLINTAs: “It is not only about us”. Frankly admitted, this is a challenge. Regina Fisch identifies a communication problem in this issue, especially regarding invitations to FLITNA-specific discussions. She describes that many of the panels and receptions hosted by MEWEM were designed for a broad group of people; however, many thought these events were only for FLINTAs, or felt intimidated to join.

Kraitt distinguishes between balancing and shaping gender equity: “We need to think about structures. There are discriminatory patterns within institutions when only people with the same cultural background work in them. We need to look at structures to learn what transformative justice can look like.” The FLINTA, BiPoc, and Queer communities would do an extreme amount of work here that is not paid or quantified, but it is very exhausting. In efforts for more diversity, she also locates the danger of tokenism. The representational logic of FLINTAs shouldn’t just serve the state or society: “We should also have the chance to be in public, to speak, to see each other, and to validate each other, even on stage.” And, “We need to take alliances seriously if we want to make a difference.”

Lynn Meissner adds, “There is still a lot of translation work to be done and explaining that ultimately we all benefit. As soon as individuals feel excluded, they stop listening – but we want them to listen.”

“Diversity is within us – no one has just one identity.”

“Reflection is important, but it’s also important to have strategies and visions, and to imagine where you see yourself in the future,” Myassa Kreitt explains. Discrimination creeps into people, she adds. Many musicians get caught up in listening to themselves and asking where they belong, instead of grasping what space – socially, culturally – they are in, she says. “Diversity is in us – no one has only one identity”. D/Arts brings together many artists who feel underrepresented and, following a bottom-up policy, has developed a Letter of Intent. The sphere of influence of people who want to build bridges to cultural institutions is enormously important, she says.

Lynn Meissner underscores this, saying that everything her network has accomplished has only been possible by connecting people in higher positions – who can apply for or award grants, for example – and people who work tirelessly – unpaid or underpaid – to address this issue.

Note: At Keychange, they talk about women and gender-minorities, which is comparable to “FLINTAs” in German. Currently Keychange looks to the USA and therefore also speaks of Gender-Expansive People, in order not to push people into the corner of minorities.

A LOOK BACK AT THE WAVES VIENNA CONFERENCE 2022 – “POPULAR MUSIC, EQUITY, DIVERSITY” BY MDW