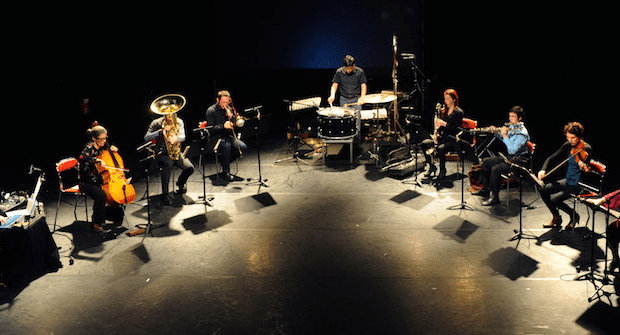 The Austrian composer PETER JAKOBER and the ENSEMBLE]H[IATUS founded by the cellist MARTINE ALTENBURGER and the percussionist LÊ QUAN NINH have a history of collaboration stretching back years. In February of this year they released their first CD on the french label Césaré. It is an astounding example of the unusual unity of interpretation and improvisation.

“Ensemble]h[iatus – Peter Jakober” is the simple but accurate title of the six song CD. Three works from Peter Jakober, among many other things winner of the Erste Bank Kompositionspreis 2015, are first interpreted, and then improvised upon. A musical call and response.

The album opens with “Beneden”. A work from Peter Jakober that was premiered by ensemble]h[iatus in 2010 and found its way into the program of Wien Modern in 2016. “Beneden” is Dutch and means “downward”. From the very beginning Jakober takes the listener on a trip “downward”. Jakober populates the from within, according to the liner notes. The cover, which features name of the ensemble and composer as equals, shows a view from the bottom of a light-well, looking upwards toward the expanse of the firmament. Whether that well is a tunnel built upwards or a shaft dug downwards is entirely a matter of interpretation.

On his two other pieces – “mehr, ein wenig” from 2008 and “weit beisammen” from 2010 – the composer himself mixes in live electronics, becoming a part of the ensemble.

The special thing about ensemble]h[iatus (made up of Martine Altenburger, Tiziana Bertoncini, Fabrice Charles, Isabelle Duthoit, Carl Ludwig Hübsch, Géraldine Keller, Lê Quan Ninh, Thomas Lehn, and Angelika Sheridan) is that all members of the ensemble are active as interpretive as well as improvisational artists. Altenburger and Ninh founded the ensemble over ten years ago, but have been playing together for more than 25 years. According to Ninh, for the ensemble improvisation means to question, beginning with the first use of the instrument, its typical style of play and the aesthetic of its sound. This is particularly apparent on the theatrical final track of the CD.

The CD can be ordered at www.metamkine.com