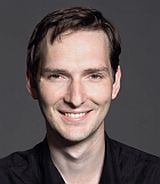 Gerald Resch is currently one of the most promising young composers  in Austria. Despite his young age, the Upper Austrian composer can already look back on numerous sensational performances of his works on a local and international level.

Fast Facts
Gerald Resch studied composition with Michael Jarrell, as well as musicology, philosophy and art history at the university in Vienna. Study visits in Cologne, Berlin, Paris and Rome encouraged his musical poetics, which integrate diverse influences from non-musical disciplines (architecture, geology, linguistics, textile art, etc.). The compositions of Gerald Resch are marked by color, organics and drama as well as an openness for unexpected methods.

Portrait
Viewing exact matches from different angles is an aspect that is often found in compositions by Gerald Resch. In addition, he combines various playing techniques and methods of composition. This heterogeneity leads to a contrasting variety, which always follows a strict dramaturgy. Playing with thoughtfully selected sounds brings additional, often very subtle facets. The composer usually finds inspiration from non-musical references, such as a poem by Heiner Müller in “Schleifen”, the paintings by Sigmar Polke in “Zerrissene Zeit/Verschattung” or essays on aesthetics in “Fünf Versuche nach Italo Calvino”.

Working with performers is central:  the technically and musically demanding works “Passagen” and “Knoten” were tailored for the bassoonist Robert Buschek. In “Knoten”,  the bassoon mixes with the instruments of the ensemble into exciting tone colors, resulting in tightly knotted passages and then backs away in rather reduced sections, until the end of the performance encourages a questioning motive, which keeps you thinking about what you just heard.

The titles of Resch’s compositions give the audience clues, but with enough space for their own associations and images. Titles such as “Schlieren” for violin and orchestra (dedicated to Patricia Kopatchinskaja), “Fenster” or “Spin” for chamber orchestra testify this.