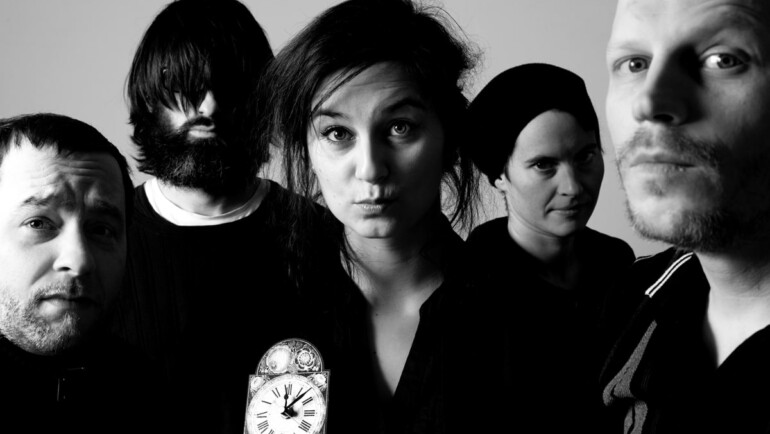 Maja Osojnik, Susanna Gartmayer, derhunt, Raumschiff Engelmayr and DDKern – the names of the involved musicians in the project BROKEN.HEART.COLLECTOR already promise a very exciting and unusual listening experience.  BROKEN.HEART.COLLECTOR take us on a sound journey free from all stylistic concepts in the spirit of avant-garde. Innovative, multi-layered, atmospheric, dark, complex, weird and violent. In any case, just the right dosis for those who are always looking for the unconventional and new.

Those who know the current projects of the five protagonists of this extraordinary band project, know that the music of BROKEN.HEART.COLLECTOR cannot be described with conventional categorization attempts. The members are all true musical free spirits that do not really care much about stylistic boundaries. There is hardly a genre in which Maja Osojnik (Rdeča Raketa, Maja Osojnik band FruFru, Subshrubs) has not already experimented with. No matter whether in jazz, contemporary music and improvisation, electronics, pop, or traditional music, the native Slovenian is an incredibly versatile vocal artist and bass flutist with a very impressive sense of style through the worlds of music. It is a similar story with Susanna Gartmayer (When Yuppies Go To Hell, Vegetable Orchestra). The highly successful improvisational bass clarinetist is a wonderful example of an artist who always strives to tread the paths that lead away from the conventional whenever possible . The three gentlemen derhunt, Raumschiff Engelmayr and DDKern are also no strangers to experimental music and have proven their their highly experimental liberated approach to rock music  with their band Bulbul.

As a special honour this year, the artist Billy Roisz disassembled BROKEN.HEART.COLLECTOR’s song  “eisenwalzer” for her new video “Zounk!” and weaved it into a brightly colored and dense image sound-texture that vibrates between white and black frames, bringing the movie screen to life.  The video was presented to a large audience at this year’s Berlinale and premiered in Berlin on February the 14th, 2012.
In Austria, the video will be shown at this year’s Filmfestival Diagonale in Graz on the 22nd and 24th of March 2012 and will be online from then on.

All in all, BROKEN.HEART.COLLECTOR is a  highly intense, densely atmospheric listening experience and will definitely be enjoyed by all lovers of experimental, avant-garde-influenced sounds.
Michael Ternai (translated from German)