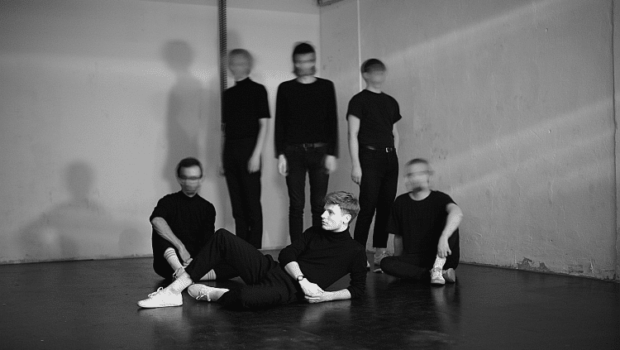 “Three steps forward, two steps back” isn’t just an empty catchphrase, it’s a pretty good description of the arduous process of building a career as a musician. But it doesn’t always work out that way. Sometimes the records and concerts come in “Fast and Furious”. That has certainly been the case for CATASTROPHE & CURE recently.

The six headed band is doing so well that they even have a chance to take some extra steps forward. “Blank Spots” is the name of their soon (April 7th) to be released mini-album. “They have left it all behind”, it says in the official description of this record. Left behind the inner responsibilities and conventions. It sounds good, but you can’t really be certain what it actually means. One thing they have definitely left behind is the pressure to choose between releasing either a single or an album in order to avoid falling out of music industry standards. “Blank Spots” is a 10” record that “only” contains six songs.

What we might be able to interpret into the phrase “inner responsibilities” might be the band´s conscious decision to change their musical style and take a new road. Not that Catastrophe & Cure have suddenly left indie-pop for the realms of metal. They have however left behind the ornate and catchy pop-song of their past. “Blank Spots” is a minimalistic, gentle, and very melancholy album.

It carries a certain sadness about it. A sadness it doesn’t quite lose, even on the last track, simply named “Outro” that oscillates between melancholy and hopefulness. Emotionally, “Outro” is reminiscent of “Bloodflowers”, an album from the legendary post-punk band The Cure. The songs on “Bloodflowers” indulge themselves in typical Cure manner with sprawling intros and outros. They give the music time to unfold and the emotional stage to be set. After two minutes intro you then know exactly where you are and find yourself caught up in the song.

And that’s what happens on “Outro” from Catastrophe & Cure as well. The musical parallels to The Cure have long been noticeable in the work of the musicians from Steyr.
Their choice of instruments and their flirtation with sprawling introductions and codas were already heading toward post-punk melancholy on their first album “Like Crazy Doves”, released in 2012.

THE SADNESS OF EPIC MELODIES

Now you can hear the influences in the songs “Debbie Debris”, “Tongue Tied” and of course “Outro”. The single (and opener) “Blank Spot” goes in another direction. There is a lot of dream-pop there, and with the bright synths in the background you could almost think it was cheerful. But the vocals from Johannes Eder are anything but uplifting. His vocal style subdues the mood in a pleasant way. The result is an individual style that adds to the recognisability of Catastrophe & Cure.

“Blank Spots” is a mini album that lives from its continuity and harmony. The songs don’t feel like a selection of tracks that wouldn’t fit on other albums, instead they sound like they were composed just for this work. The result is a melancholic and dreamy atmosphere that you will want to let carry you away.