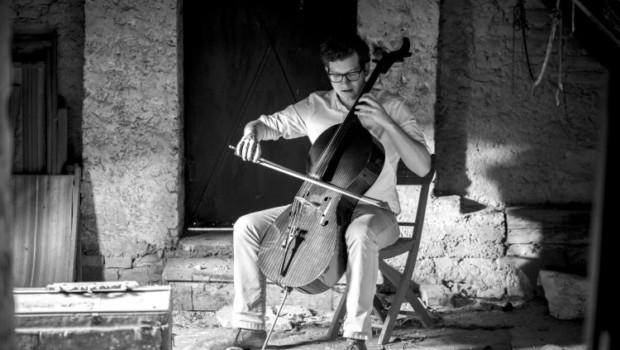 The Viennese cellist CLEMENS SAINITZER has released his first solo album this year, “Solo # 1”. The musical basis of this multifaceted work is SAINITZER’s project “Sunday Songs”, for which the jazz musician has written a song every Sunday for a period of one year.

Basically, Sainitzer’s “Sunday Songs” project was a therapeutic intervention: “I wanted to lose my fear of writing down ideas. It was about overcoming the famous fear of the white sheet of paper, the fear of something concrete”, explains Sainitzer in an interview with mica. “And of course it was also a good exercise to get into composing in a better way“. Sainitzer has documented the project on his website, and not just in the form of sheet music: for his musical diary the Viennese native also made drawings, wrote down his moods and thoughts and thus engaged in a rather amusing way in a compositional navel-gazing. The outcome of this one-year creative training: “I’ve become much looser in terms of composing and incidentally, I now have a huge pool of ideas that I still draw on“, says the 29-year-old.

Several of the compositions became the basis of his first solo album published this year. Of the ten pieces on “Solo # 1” six have emerged in the course of the “Sunday Songs” project. The result is a thoroughly remarkable album which stands out due to its very undogmatic approach and in particular shows what one can pull out from the cello as a solo instrument. Sainitzer plucks and bows and he tends to chop with his instrument as well. And he sometimes sees his cello as a percussive instrument: “I see the cello as a sound machine.” It’s also about a certain demarcation: “There are already so many cellists who play so insanely beautiful. I figured I did not have to do that as well“. Ultimately, “Solo # 1” is a highly complex work that oscillates between tightly-composed songs and Sainitzer’s propensity for improvisation. An album containing fragile moments as well as walls of sound. Sometimes “Solo # 1” sounds like a soundtrack without a movie. The musical openness of the cellist and his love of diversity are no coincidence.

“Gustav Mahler was just as much part of our home as was Michael Jackson,” says Sainitzer, describing his musical socialization far away from any genre-thinking. “Made in Japan” by Deep Purple was just as important a reference as Miles Davis’ complete works says the graduate musicologist. He also likes to be undogmatic when it comes to approaching music: “As a teenager, I first bought the autobiography of Miles Davis and then listened to his complete oeuvre piece by piece. Exactly the other way round, the others are going”. His interest in the music greats of the 20th century was also expressed in his bachelor thesis: “I wrote about Bob Dylan’s betrayal of the folk music revival. That really interested me”. As part of his master’s thesis he wrote about the cello outside of the classical concert hall. Yes, he is a fundamentally curious person: “It’s all groovy. And I’m always assuming that I can learn something more.”

From electronic jazz to Dada-Step

He came to the cello at the age of six. Many years of classical teaching followed. Jazz came into play when he switched teachers and took up lessons with the Munich jazz violinist Mic Oechsner, who also aroused his interest in improvised music. He also took classes in Berlin and Stuttgart with Stephan Braun and in New York. Sainitzer’s attitude is also expressed by the diversity of his projects and bands: in the duo Sain Mus guitar and cello meet each other, Echoboomer is an electronic jazz project, in the trio Artreju a trumpet, a cello and a violin converge and the music of the band Hans is described by him as “Dada-Step”.

A career that just happened

And accordingly, Sainitzer moves around a lot. He just came back from Japan where he also performed with a koto player. And he recently played in Abu Dhabi, the US and in many European countries. He had no master plan for a career as a musician. Rather, it was about living out his love for music and pushing forward things in a pragmatic way without concrete goals. “That I am a professional cellist today, actually just happened to me.”