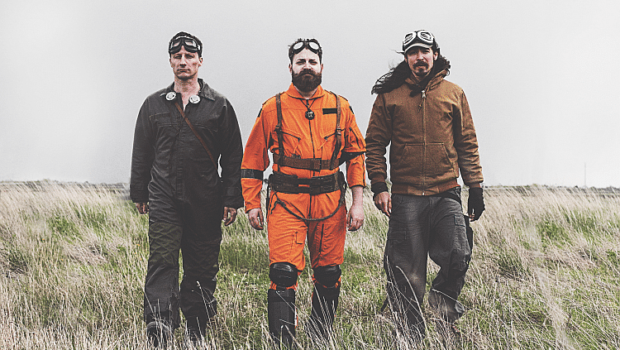 A wonderfully weird and grippingly energetic note between various stylistic chairs: EDI NULZ once again let the music on their fourth album “El Perro Grande” (Boomslang Records) stray far away from the ordinary.

A band that shows again and again the wonderfully laid-back and artful way one can free oneself from all musical constraints and traditions. With Siegmar Brecher (bass clarinet), Julian Adam Pajzs (guitar) and Valentin Schuster (drums), Edi Nulz consists of three musicians who have opened the gates to a new musical understanding since the formation of their band in 2011. And, as is very obvious on their new album, they have put together their very own sound. Originally coming from jazz, the three gentlemen have basically left that all behind them and found their own musical identity, drawing their influences from different directions.

Of course, jazz still happens in their numbers, it’s just completely reinterpreted. Edi Nulz mixes it with elements of rock, surf, punk rock and various Latin music influences. What the three gentlemen create is an incredibly multifaceted sound. One that can have a powerfully driving groove or be suspenseful, calm, and progressively playful. And then it can be violent, vibrating and refreshingly edgy and uncouth. It is a sound that offers plenty of room for experimentation. The eleven numbers are like a fast-paced, but atmospheric roller-coaster ride. One which always offers short breaks to catch your breath for a few moments.

If more proof of the band’s fascinating musical peculiarity was needed, the new album delivers it. On “El Perro Grande”, Siegmar Brecher, Julian Adam Pajzs and Valentin Schuster deliver a piece of music that really sets its own standards. The numbers of Edi Nulz know how to entertain to the highest degree, they seduce the listeners in their very own way and can kick you in the butt. If you want to enjoy a different kind of listening experience, this band is the best choice.