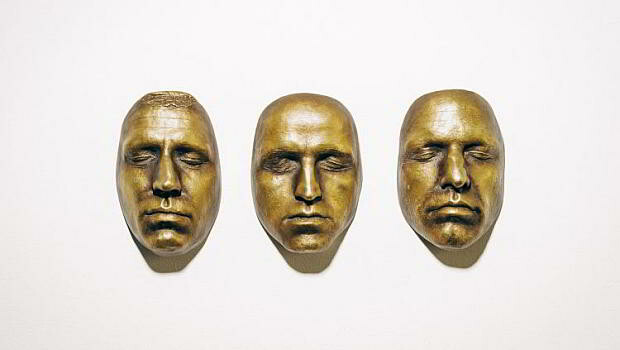 ELEKTRO GUZZI are known for their unique form of techno. With their latest release “Polybrass” (Denovali Rec.), the three musicians once again prove that they are not interested in the dichotomy of digital and analog, but in the adventurous search for an independent sound.

Elektro Guzzi are masters of their trade. The line-up is conventional with guitar, bass and drums, but the project as such is also remarkable in an international context: they have committed themselves to recreate club music with classical instruments. The formation continues take an enlightened approach to genres that normally follow the pulse of precisely clocked machines – an approach that is fascinating in its masterly realization. Bernhard Hammer, Jakob Schneidewind and Bernhard Breuer are accustomed to taking off with a tremendous energy. The driving element, the percussive groove, remains on their fifth studio album “Polybrass”, but otherwise the three musicians have taken a slightly different path and that still delivers a great performance.

BETWEEN HYMNIC ECSTASY AND INTENSE MELANCHOLY

As the title suggests, Elektro Guzzi have extended their sound for “Polybrass” with a number of brass players. Three accomplished musicians have joined them: trombonists Hilary Jeffery, Daniel Riegler and Martin Ptak, who are already known from renowned formations such as Zeitkratzer, Kilimanjaro Darkjazz Ensemble and Sand. They take the trombone out of the context of classical instrumental music and (big band) jazz and instead take it seriously as an atmospheric sound source. The result is convincing on all levels. Although Elektro Guzzi’s sound remains as straightforward and concise as ever and is still based on repetitive patterns, the sound spectrum benefits from the additional instruments, it is richer in nuances and develops more depth.

The atmospheric tracks are held together by the musicians outstanding sense rhythms, complex structures which run against or into each other, unfold polyrhythmically, only to come together again in a collective flow. It’s clear that the formation draws not only from club genres such as techno, but also from composition strategies of early minimalism. The result is an interaction that has rarely been seen before.

The numbers themselves are multi-layered and varied. If “Aerostat” and “Miney Mick” are ecstatic, almost hymnic pop numbers (the latter including a grandiose music video by singer and director Lisa Kortschak), other tracks are reserved to dubby (“Yuugen”), turn to the noisy (“Irritation”) or focus on the hypnotic sound surfaces of the wind instruments (“Backlash”, “Magnet”).

“Polybrass” lives, as one would expect, from the dynamic playing of the extended band, from the manifold timbres of the instruments, the deep references and the passionate yet relaxed approach of the musicians.