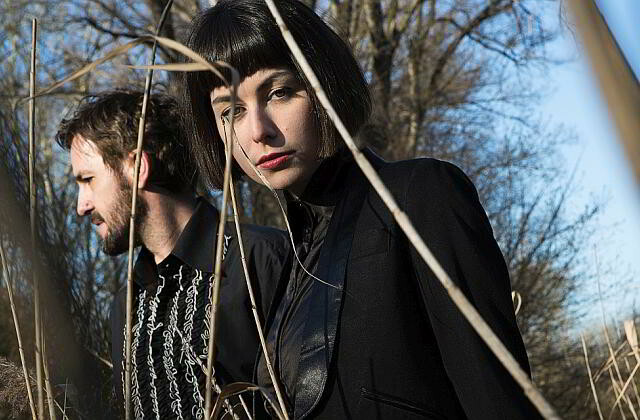 The change alone is consistent

“Nothing is permanent” is the name of the first album of the electropop duo DRAMAS – and of course also a quote of Schopenhauer. DRAMAS are the FM4 Soundpark act in November.

To ask about the origin of band names is a rather frowned upon matter. With DRAMAS from Vienna, however, it at least makes sense to inquire about the ironic potential: “We can’t do without irony. Dramatic, in any case, is primarily the way we produce, we discuss and argue very often. That can be exhausting, but the final product has been worth it so far.”

Electroduos in Austria have celebrated great success, especially over the last few years, particularly Mynth, Lea Santee and of course Leyya. A nice parallel between the latter and DRAMAS lies in the heaviness, the melancholy, which, back then, also distinguished Leyya’s first album.

It was not your fault, but mine

As it often happens, both Viktoria Winter and Mario Wienerroither already played in bands before their joint project. In the case of Viktoria Winter’s singer-songwriter stories, the musician doesn’t necessarily mourn: “Playing in bands wasn’t really for me. A lot of people come together, who also have priorities outside the band, of course, and often everyone wanted something different.” Now, with DRAMAS, she feels that for the first time she can do exactly what she wants.

She met the second half of DRAMAS, Mario Wienerroither, by chance a few years ago at the Ars Electronica. It’s a beautiful story: They didn’t find each other through mutual acquaintances, or through various online platforms, but through a mix-up. At first Viktoria thought Mario was Mumford and Sons keyboarder, Ben Lovett. “That would have been all right with you, wouldn’t it?” Mario smiles at her during the interview. “Well, I was listening to some other music back then,” replies Viktoria.

DRAMAS kept the organic music with them, and one can well imagine that the basis of their songs is still the melody, the voice, and the accompanying piano. Singer-songwriter roots, which Mario – who works full-time in the music industry and otherwise takes care of sound design for film, television and advertising – are transformed into an electropop song following a sketch of Victoria. That keeps it from sounding like “Little Lion Man”.

From black to dark grey

It all started in 2016. DRAMAS didn’t rush their songs. This spring their first EP “Libra” will be released and will later also give the name to the fantastic opening song of the album. But DRAMAS wont sound like the New York dark artrock band School Of Seven Bells throughout their whole EP. They sound as if a dark veil, like that of an old painting, has been removed; here one can feel even more that the songs didn’t originate from a purely electronic corset, but that they have this warm, organic feeling to them. The album develops this basic idea even more than their previous EP. Classic singer-songwriting has yet to find its revival; although it was not seldom the clearest and most touching, because most direct form of music.

“In the beginning I thought that the album would get even darker, but now I’m glad that it’s often musically playful, while still staying true to my lyrical demands and the concept of not using the first-person form from beginning to end.” – Big questions like love, purpose, and death are easier to ask without total introspection. The aloofness of the person singing, in whose voice one often wants to hear one’s own stories, becomes a generally valid narrative perspective that does without autobiographical material. And the feeling of being addressed in the lines is doubled by the withdrawal of a single person.

In life and in music nothing is permanent

Like the EP, the first album of DRAMAS was released this year to coincide with the 17th FM4 Soundpark birthday. It was obvious to both of them that the EP songs would be on it as well: “We had already finished a good nine songs by the time the EP was released, or at least were in the process of doing so. It was clear to us that the sound wouldn’t change between EP and album.

Secluded and isolated from the outside world, even from external musical influences, Viktoria and Mario worked on the album all summer long. And now it’s here. It has the ambiguous title “Nothing Is Permanent”. The line “Nothing Is Permanent” is borrowed from the song “Eph” (“Nothing is permanent / everything is permanently apart”), which describes the life of a fruit fly in its musical melancholy. Which other short animal life would have been more suitable to express this sentence more intensively?

“Nothing is permanent” hangs in the air like a simple, honest statement. “It applies to all people. Those who pessimistically say “it’s not forever anyway”, but also those who get easily excited to bring them back to the ground – because both success and happiness are not meant for eternity.”

Regardless of the content, “Nothing is permanent” can also be applied to the duo’s music. The 80s celebrate their reworked, contemporary comeback. “I’ve been making music for so long, and this decade is simply what has accompanied me the longest. I also like the things that feed from contemporary music best now, but also in music videos, in films, in books,” says Mario. Viktoria sums it up with a hearty laugh: “I tend to bring modern pop into our music, and Mario brings his love for earlier music decades. I’m the Cool Kid – and he’s the 80s nerd.”

The most beautiful proof of this fusion on the DRAMAS album is a cover version of the legendary Ultravox song “Vienna”. In it, and also in singles like “Mess” or “Midnight Sun”, drama and theatricality are taken up with self-irony, without ever completely losing their seriousness. Filmic sounds often push the auditory element aside for the sake of the visual: “Nothing Is Permanent” – an album like a film noir.

By Lisa Schneider – translated from the German article (FM4) by David Dempsey.