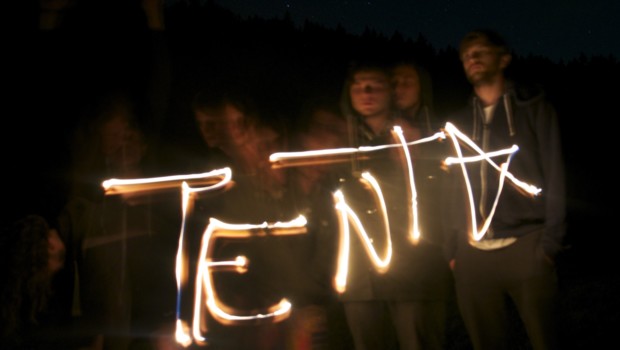 The experimental Viennese rock quartet TENTA oscillates between the sounds of the 70s and the current view of modern societies. The second album “W.E.I.R.D. Subtopia” is a big step towards the consolidation of the band’s very own sound. An accessible storyteller sits regally above overflowing and provocative instrumentals. Sebastian J. Götzendorfer spoke with SIMON REIF (drums) and NICOLAS FISCHER (bass) about band dynamics, improvisation as a stylistic device, utopias, and the implications of brain research.

Your style is sometimes called art-rock. How did you come to this genre?

Simon Reif: It simply developed in a joint process.
Nicolas Fischer: When the band was founded, we spent three years in the rehearsal room and often jammed for days. So it was a long process until we said: “This is becoming a sound that works as a recurring theme”.
Simon Reif: It’s also about every member finding their place in the sound.

The sound is often reminiscent of psychedelic and progressive rock from the 70s – so, rather eccentric. The sound becomes more accessible through the voice of your singer Andreas Kinzl. Was that a conscious decision?

Nicolas Fischer: That happens quite naturally through his voice and expression. It was a pleasant coincidence that from the instrumental side it is already weird and gets out of hand – and also differs from the current mainstream – but through the lead vocals everyone can quickly get to grips with the music. But that was not intentional and he wasn’t cast [laughs] because of it.

There are always musical projects that aim to get straight into the mainstream. You sound different. Is there a certain ideology behind it or is it just a reflection of personal musical tastes?

Simon Reif: I think our style is the intersection of what we all like.
Nicolas Fischer: But it’s also about access. How do you like listening to music? What inspires you about music? Every band has a “sweet spot”. A sound that everyone in the band likes. I think , an important point is also, that we want to discover something about ourselves in the music. You mentioned that some bands already know beforehand what they want to do … With us, things often happen that we can’t name ourselves yet and that get away from us.

Sounds like a rather organic approach to song writing. As far as I know, there’s a lot of improvisation going on with you, isn’t there?

Simon Reif: I think we took that to the extreme with the new album. At the beginning we really only improvised and then afterwards we transcribed them.
Nicolas Fischer: All of our numbers have very different structures. There is never really this classical A-B-A-B scheme. There are also many different approaches to such improvised sessions. Often there is only one beat or one vocal line left of the whole thing, which is then used further. On the other hand, ten-minute dramatic arcs are also reproduced, which one would otherwise never write like this. That’s the beauty of it – the unpredictable.

What is also interesting about Tenta’s band constellation is that you use two bass guitars and no guitarist. Usually it’s the case that bands don’t find bass players, and you have two. Was that a creative wish or a personal necessity?

Simon Reif: Originally, as a trio, we were looking for a guitarist and we also worked with a few …
Nicolas Fischer: But it soon became clear that it wasn’t necessarily the fourth instrument that mattered, but rather the fourth person. It depends on what kind of character he or she has and how he can complement the others. If you already have three somewhat idiosyncratic characters, it’s not that easy. At that time we jammed a lot in the rehearsal room and invited a lot of people.
Simon Reif: So it might as well have been a second keyboarder.
Nicolas Fischer: At some point I invited Arthur [Darnhofer-Demár, note] and the chemistry clicked so well that the others came up with the idea of simply creating a line-up with two bassists.

Simon Reif: Of course this only works because both are not necessarily prototypical bass players.

How exactly does the band structure work? Normally in such rock constellations you have the guitar as melody instrument and the bass as rhythm instrument next to the drums. Does one bass player tend toward one role more than the other?

Nicolas Fischer: That’s the decisive point, which in my opinion makes the sound of Tenta very versatile. The two bassists often change who plays in the lower frequency range and who in the upper frequency range. That sometimes changes within a song. Depending on who then plays what, the result also sounds very different.

“SO BASICALLY IT’S A SUBTOPIA – JUST A SUBSET.”

Let’s talk more concretely about the new album. What does the acronym in the title of your new album “W.E.I.R.D. Subtopia” actually refer to?

Simon Reif: Well, the word weird is cool [laughs]. No, but it comes from a book, “Homodeus” by Yuval Noah Harari. He now has three books in the bestseller lists. I read that before. He talks a lot about brain research and about the fact that it is often not so meaningful for the entire population. Most of the test persons are students, they are “Western, Educated, Industrialised, Rich, Democratic”. For this he used the acronym “WEIRD”. He often talks about utopias. To be more precise, our society is close to a utopia, if you ignore the fact that there are also completely different social strata, especially in poorer countries. Basically it is therefore a subtopia – only a subset.

With this explanation, the hint of social criticism or at least observation is obvious. Is this also reflected in the themes of the album?

Nicolas Fischer: Yes, definitely.
Simon Reif: The title has been around forever and our singer has certainly incorporated it into the lyrics. One song, for example, is not called “Kallipolis” by chance – a philosophical treatise on a utopian city.
Nicolas Fischer: For me, making music has a lot to do with observing – you absorb what happens around you. And since we grew up in the so-called first world, that’s automatically our main point of reference. You also regularly flee from things in this world that you don’t like and disappear into the subconscious. That’s what many tracks are all about for me.

What can you tell us about the rather distinct artwork of the album?

Simon Reif: We didn’t agree on the direction of the artwork for a long time, until I eventually found Bettina Prieler. In fact, she even required a lot of input from all of us about the topic of the album. Each individual had to write an essay about his associations with “W.E.I.R.D. Subtopia”, which she then incorporated into her artwork.
Nicolas Fischer: The metaphysical city comes across extremely well in her artwork. The inner city in us, more or less.

At the risk of over-interpreting something: These sketch-like pencil drawings go very well with the somewhat sketch-like sound of Tenta.

Simon Reif: Yes, I think so too [laughs]. But honestly it was a coincidence, because that’s just her style.

It is still apparent that the whole album was taken to a new level of professionalism compared to the first album. From the artwork to the sound to the production.

Simon Reif: The team is growing more and more. For example, this time David Furrer not only mixed, but also produced. So he was already at the rehearsals. He had a massive influence on the album.

“THE TEAM – THE TENTA FAMILY – MUST GROW EVEN BIGGER.”

Knowing you’re in a niche genre: What is your plan with the album?

Simon Reif: The team is growing more and more. Meanwhile we always have our own sound technician and a lighting technician at the concerts – with LED rods and all the trimmings. That’s all coordinated with the songs. More and more we now work together with booking agencies in order to make the whole thing bigger despite the niche. The team – the Tenta family – has to get bigger.

So you see it to a certain extent as a collective?

Nicolas Fischer: Yes, that’s a good thing.
Simon Reif: Exactly. The sound technician and the lighting technician are certainly extended parts of the band itself.