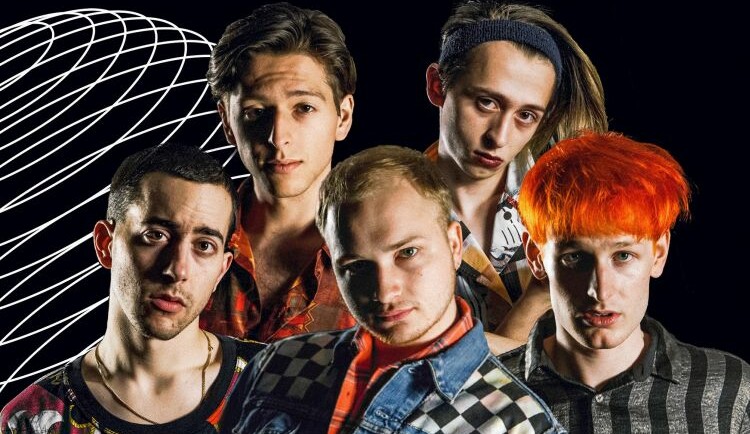 FLUT – FLORIAN and SEBASTIAN VOGLMAYR, MANUEL HAUER, JAKOB HERBER and JOHANNES PAULUSBERGER – is a Viennese band originally from Upper Austria with an audiovisual obsession for the 1980s. With the EP “Nachtschicht” in 2017, the band thematized the Austrian nightlife in Linz, and on October 5, 2018, with their debut album “Global” (Problembär Records), they “upgraded” what they had begun. The title promises a musical voyage of discovery, which is not dedicated to any country and neither crosses contemporary pop culture nor retro trends. JAKOB HERBER spoke with Julia Philomena about love, lust and excessiveness.

From what context did the album “Global” emerge?

Jakob Herber: We didn’t make it easy for ourselves because we knew that the first album was a milestone on the band’s path. In the end, however, we were able to free ourselves from pressure and be completely creative.

How long did you work on it?

Jakob Herber: From the first demo to the pressing it was certainly two years. The best thing is probably that – even though we often had serious doubts about how to get there – in the end we achieved what seemed like a dream in terms of the record.

What does the term “global” mean to you?

Jakob Herber: to put it in a nutshell: to focus on the whole picture. The name for the album came naturally in the course of the studio process. Utopias and dystopias were often a topic, we philosophized a lot about the world, very rarely one used the term literally, but in the end it was still clear to everyone that the album had to be called “Global”. Everybody just kind of checked it out [laughs].

What has happened since the EP “Nachtschicht”?

Jakob Herber: On the one hand we experienced spectacular things that went way too fast for us, and on the other hand we had very disillusioning experiences. It took us some time to reflect and come back to the basis – to make good music.

“what love and supranationality do have in common…”

“Don’t draw any line. No system.” (Keine Grenzen ziehen. Kein System.)“ From Linz to “No Country” (Kein Land). A love song or a social criticism?

Jakob Herber: We find it exciting that it can be both at the same time. This is what love and supranationality have in common: in the long run it is more beautiful together than alone, even if one knows that one is not in agreement. It is an invitation to look at the world from the other side of the border.Especially when it comes to borders, opinions are currently very divided.

Do political circumstances have an impact on your music?

Jakob Herber: That isn’t just about Austria alone, but more the current international mood. We are not a very political band, but of course we deal with current affairs. Due to the social climate that surrounds us, disorientation and desires creep into the music. But it is only in very few cases that there is a direct political connection.

Which number describes the style, the theme of the album best for you?

Jakob Herber: When we had all the songs in front of us, we noticed that the “Stadt am Draht” as its first track gave the album a setting where you can then locate the remaining songs – a striking, retrofuturistic version of the world we live in.

Which “worlds” inspire you? Which influences are essential for you?

Jakob Herber: Every band member listened to very different music during the production period. We experimented a lot with sounds and tried to keep everything very instinctive. The eighties as an influence are especially great because you didn’t take yourself too seriously and we could take more risks.

What’s the band name all about?

Jakob Herber: At the very beginning of FLUT there was only the name and very simple things we wanted to say or do or not say. The name was short, striking, expressive, uncompromising and looking good: That was actually all we wanted to be back then.

At the very beginning there are also questions. Which form of support or networking is important or made sense to you?

Jakob Herber: We think it’s great that something like mica – music austria exists. We’ve been helped a few times already. In the beginning it can often be difficult to get an overview of the important things in doing music. We can only recommend all those who are just beginning to become musically active to get some advice here.

On Spotify you are often listened to in Vienna, Berlin and Hamburg. What do you think?

Jakob Herber: It’s definitely nice to see that what we do reaches people from different regions, but of course that has no effect on how we do it. It’s a good point of reference to get a feeling for the regions where our music is already spread. If you notice something there, it can definitely give you ideas.

And which ideas have been central so far?

Jakob Herber: To put it simply: We want to make music to which you either have to dance or cry, in the best case both at the same time. Art that does this may often appear trite on the surface. But we think that the most difficult thing is to find the core of a person and trigger something. That will always be a challenge, that will always inspire us!

“PLAYING LIVE IS THE GREATEST.”

How inspiring is performing live to you?

Jakob Herber: Playing live is the greatest. Standing on a stage and directly noticing that something moves the people has something magical about it.

In which environment do you prefer to experience music yourself?

Finally: What do you want?