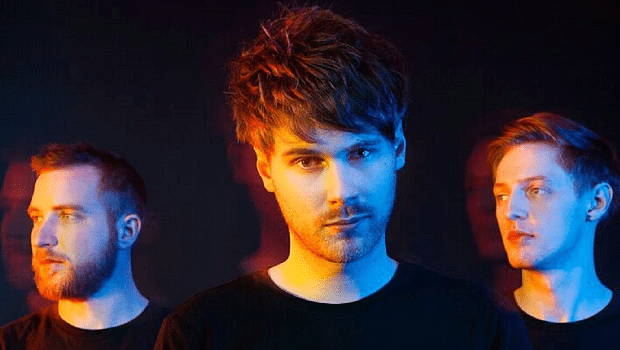 Offline is the new online

Lex Audrey are releasing their first album “No Intention Of Changing The World”: electropop about social media and (disturbed) communication. A sign of the times. Therefore Lex Audrey are the FM4 Soundpark Act in February.

“Smombie” is the word of the hour – a combination of the words “smartphone” and “zombie”. A term for those who prefer to look stoically at their mobile phone. That sounds amusing, but who doesn’t do it?

On the cover of Lex Audrey‘s first album you can see a couple lying on the beach. And although this is a seemingly wonderfully relaxing atmosphere, they try to capture the moment and turn it into a social media-suitable photo – using a selfie stick, of course. The band has no idea who the couple is. They fished this photo out of the endless depths of the internet and as anonymous as it may look, it represents both a whole generation and their sense of reality at the same time.

Lex Audrey is a trio from Upper Austria: Niklas Pichler, Patrick Pillichshammer and Lukas Staudinger all went to the “Musikgymnasium” in Linz and played in bands together before (e.g. “Loving.The.Alien”). About one and a half years ago the new formation, Lex Audrey, found a new home with the Viennese label Las Vegas Records where they released their first EP “Godgiven”. Electronic pop experiments, sound snippets, vocoder playground. The best track was also the single and shares the same name: ”Godgiven” is both beautiful and painful, a dark ballad about letting go, but not being able to. Lost Love.

Creating their sound step by step

Even though it doesn’t sound like it, Niklas Pichler prefers to write his songs alongside the acoustic guitar or the piano. The same goes for the debut album “No Intention Of Changing The World”. What you eventually get to hear later has been run through various music production programmes several times, has been alienated, condensed or almost dissolved by samples. The broad sound palette includes background choirs, voices distorted into the ghostly unrecognizable by synthesizers (“Metaphor”), as well as field recordings taken from the environment, such as train signals, (“All About The Inside”, still from the debut EP).

Niklas Pichler says the fact that music, at least in its final form, is now created on the computer has significantly influenced his songwriting. In an interview he remembers the first songs he wrote. He was eleven years old and a poster of Green Day was hanging on the wall. His early punk days are over, now when he scrolls through his mobile phone, there are Bon Iver or more recently James Blake.

Call me on my cellphone

The playlist on the mobile phone, the selfie-stick on the album cover, a smartphone as a Facebook profile picture. The artwork, the press photos and everything that happens online around this first album by Lex Audrey plays directly into the content which the album revolves around – the question of how our communication, the interpersonal, has changed in times of the internet, or more precisely, in times of social media. “But all this is not just a hint”, Niklas Pichler grins, who without any reluctance also calls himself a “smombie”.

Instead, songs like “From Beginning”, on which it says “All she’s loving is a picture” might be interpreted as a light poke to get us thinking. “Ah, our Instagram song“, comments Niklas. A song about truth and illusion, about filters, about the social bubble you are swimming in. About the annoyance of being tagged on pictures where you don’t smile into the camera the way you would have liked to. And at the same time about the influence other people’s self-portrayal and staging can have on us. The self-doubt that arises while you watch this seemingly perfect person sipping a mojito in Capri. The “friends” and “girlfriends” you haven’t ever met in real life.

This may sound over-intellectualised, and yet again not. The album opener “Lost To You”, for example, proves the danceability of this subtle social criticism, this skilfully staged self-irony, when you yourself are part of all this great, digital, millennial madness. A band calling their first album “No Intention Of Changing The World” is a good thing. No arrogance, but reflection. Like.

By Lisa Schneider – tanslated from the German article (FM4) by Dave Dempsey.