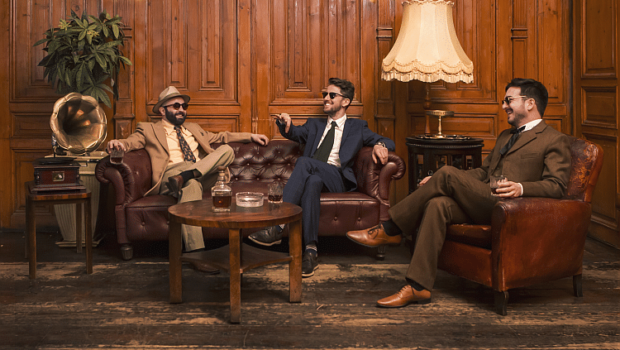 It is probably better to be sparing with premature praise. Especially when talking about a bands first release. But the musical fireworks GOSPEL DATING SERVICE (GDS) ignited with their debut album „Champagne“ (Kleio Records) are nothing short of a massive funk-pop-indie extravaganza.

That’s not surprising to anyone familiar with their previous publications on YouTube.  The video for “Red” already shows that this is a band destined for greatness. It is clear that Gospel Dating Service have everything needed to succeed: Strong and diversified songwriting, a sense for hits while avoiding shallow melodies, instrumental skills that go well beyond the norm, and a sound that impresses with a high degree of individuality. And with Christoph Ertl on the mic they have an immensely multifaceted voice that consistently manages to raise goosebumps.

A BAND THAT’S HERE TO STAY

The music on “Champagne” is anything but mainstream. It’s a combination of massive hymnals, calm and melancholic moments, a whole lot of groove, laid-back coolness, a hint of funk and indie, and dacenable synthie sounds of the past. The apparent ease with which Christoph Ertl (piano, keyboards, vocals) and his colleagues David Resch (bass) und David Ruhmer (drums) manage to combine all of these influences into an intoxicating whole is particularly impressive. The end result is an amazingly soulful sound.

It’s clear that Gospel Dating Service are here to stay. The Upper Austrian band is sure to make an impact, because a debut work as strong as “Champagne” simply can’t be ignored.