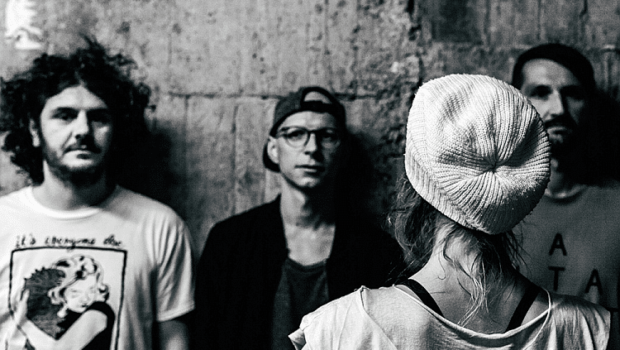 It’s already well known that HELLA COMET know how to rock, but what the quartet from Styria served up on their latest release “Locust Valley” is just what we hoped for. Even if we might not have expected it. “Locust Valley” is a piece of rock music that covers all the bases. To sum it up roughly; Lea, Frente, Jure, and Maex – the four behind Hella Comet – published a sort of history of guitar oriented music from the last 30 years.

Starting somewhere with early punk, the band then draws their musical line from noise, shoe-gaze, and grunge and then on to post-rock sounds. When the occasion calls for it, they even dive into some decently dosed pop.

This wealth of influences calls for a high degree of diversification. The angular sounds of the songs all follow their own sets of rules, arcs, and structures. This means that the entire album – sometimes more melodic, sometimes less – remains unpredictable, exciting and interesting. From the very first second on to the final note.

A ROCK HISTORY OF ANOTHER KIND

The opener “Secret Body Nation” is a musical exclamation point. Opening wth a wall of sound the song develops into an anthem that captivatingly sets the stage for the songs that are yet to come. The following songs are sometimes heavier (“Midsummer Heat”) or coolly dark (“Idiots and Slavery”) or they just move uncompromisingly and aggressively straight ahead (“the Wicked Art To Fake It Easy”). Particularly well done are the minimised moments of the album, like the song “Fortune Sleepers” which slips in to the dreamy in a strangely beautiful way.

It isn’t just the musical diversity that raises “Locust Valley” above the mass of rock releases. The singer Lea and her strong and multifaceted vocal performance provides the entire album with a strong character and distinctiveness that makes the album something very special.
Hella Comet have landed a major coup with “Locust Valley”. The rock from this Styrian band really stands above the rest. It is independent and has that certain vibe that is infectious. One can be aware of the ingredients the band uses for their sound and still be surprised by the result. A reaction that is increasingly rare in this genre. Highly recommended.