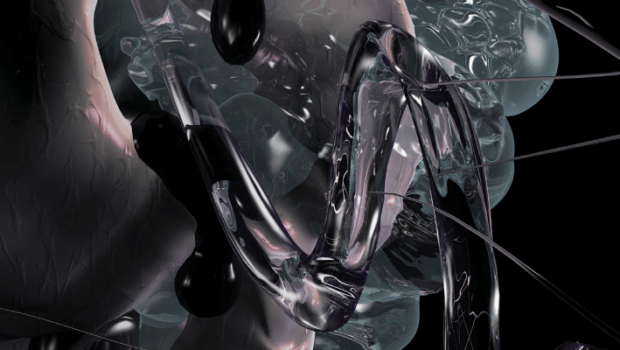 The Viennese label “Ashida Park” was founded in 2016 by ANTONIA MATSCHNIG and MARKUS BLAHUŠ. Their focus lies in musical forms that deal with a so-called “post-club-sound” and could best be described as a sort of deconstructed club music. In an interview with Ada Karlbauer they talked about online-communities and their translation into real-life encounters, remixes as a connection between Osaka and Bristol, and the club as meeting point and safe-space.

How did “Ashida Park” come about?

Markus Blahuš: The original idea came about when a friend from Vienna sent me some of his tracks. I didn’t know he was even producing music at the time, but the stuff impressed us and we would have loved to release him immediately. In the end that release never happened.

Antonia Matschnig: Then we ran across Lil Taty from Belgrade who was looking for the right platform for his EP. At this time it was almost complete, including remixes, artwork, and videos from Flufflord . That had an impact on the aesthetic of the label from the very beginning.

The internet makes it possible to work the way we do.

Community plays a central role for “Ashida Park”. The internet as an alternative method of artistic encounters and publication is also important and also changes the work…

Markus Blahuš: The internet makes it possible to work the way we do. The cool thing about it is that it connects people who would have otherwise never worked together. One of our artists, Le Makeup, for example, is from Osaka, Japan. The remix on his EP is from Galtier from Bristol and the artwork is from Flufflord out of Zagreb.

Antonia Matschnig: Our community is mostly online, and that’s also how we met most of the artists. But we try to bring that into the real world. The club is a central location for experiments and communication.

You describe the sound of your releases as “Hybrid Club Music”. What does that mean?

Markus Blahuš: Basically it is about getting over the urge to define your label through one genre. “Hybrid Club Music” serves as a placeholder that makes it easier to answer the question “What music do you make?”. The influences come from all sort of musical directions. These are then modified or deconstructed. A lot is based on hard bass or its variations: from techno to grime or even reggaeton. The aesthetics that unify these influences, however, are very similar between our artists. They share similar preferences for synths, vocals or pop references. Well-known A capella tracks are deconstructed and ripped out of their context. That creates a very individual and interesting approach to pop music.

The club is a space where the people from the internet come together.

Does the club as a physical space play an important role?

Antonia Matschnig: In our case the club is a space where the people from the internet come together. It is important that it is a safe platform, a safe space, where everyone can meet, move, and create together. But that requires certain ground rules in order to work.

Markus Blahuš: It’s also important for us because the music we release is going to be performed there and needs to be able to withstand that situation. That doesn’t mean that only dance tracks can be played, because we want to get away from that. I want to see more joyful experimentation from everyone, but we have one big problem. We don’t have this club, this home-base, in Vienna yet.

The internet based aesthetics of the art reach beyond just the music to the visual level. How would you describe this aesthetic?

Antonia Matschnig: To keep it short: similar to the music. Digital. Music and art are intimately connected and influence each other. Although we obviously come from the music side of things, the artworks are very important to us. Just releasing music wouldn’t be enough for us.

What are your next big steps?

Antonia Matschnig: So far, everything has developed organically. That should keep happening. Our goal now is to take a more structured approach. Other than that our next step is to release the FVBIO EP “Turbid”!

Markus Blahuš: FVBIO has actually been with us since the beginning and had tracks on both of our compilations. He has been producing music for a long time but in his home town of Terlan in South Tyrol, there isn’t any scene or possibility to get this kind of music out. That frustration makes an impact on his music to a certain degree in the form of an extreme emotionality. At least I interpret it that way.

The hypernetworked music is only slowly penetrating local subcultures. It will certainly take much longer for it to develop into something well known.

Antonia Matschnig: Yeah, that’s easy to forget when you are involved in this interest scene. This aesthetic can be found in almost every city, but the scene is still really small.

Markus Blahuš: Acts with a few thousand SoundCloud followers usually play at international festivals that are relevant for this kind of art and music. It is easy to forget that this is all still pretty small.

Antonia Matschnig: Development is still going to take a while, but festival bookings and media interest show that this subculture is growing quickly.

Do you have plans to turn this label hobby into a profession?

Antonia Matschnig: It’s difficult, because on the one hand it should continue to be fun, that’s the whole reason we are doing this in the first place. But on the other hand we have to start thinking more professionally and more structured. I think we owe that to our artists, because they are trusting us enough to release on our label. We also want to offer them the best possible platform, and it can’t be irrelevant to us if their music is read about or listened to.