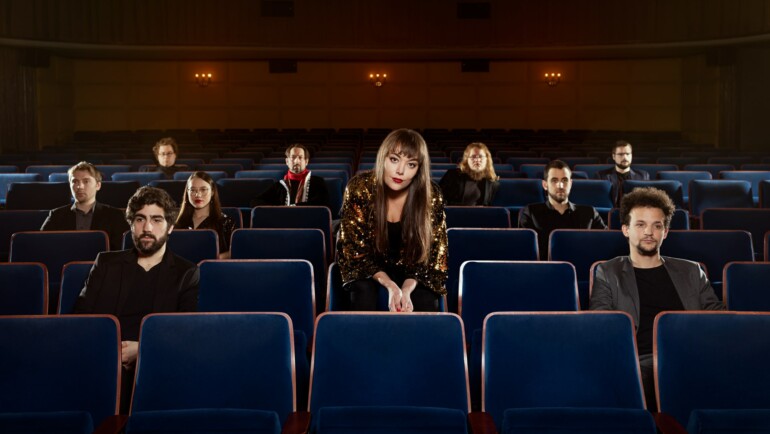 She’s a rapper, poet, author, activist, winner of several competitions, organizer of numerous events and, as if that wasn’t enough, the Austrian Lisa Simpson: YASMIN HAFEDH aka YASMO has a lot to show for her resume and is, not without reason, one of Austria’s most successful lyricists. In an interview with Katharina Reiffenstuhl, the Viennese-local spoke about Austrian ambiguity, the relatively coincidental emergence of her band and her experience as a voice actress for one of the best-known US animated series.

Your lyrics usually have socio-political backgrounds. Do you write spontaneously or do you deal with certain topics for a longer time?

Yasmo: It depends very much. I think there are always topics that I carry around with me or that occupy my mind for a while. Actually, it’s usually that if something occupies me long enough or too long, then I tend to make a song out of it. At some point there’s a trigger or a moment where I think to myself, ‘Hey, okay, I have to write about this now.’ Then everything that I already had in my head before that comes into it, so to speak.

In the meantime you have the music project “Yasmo & die Klangkantine”, which is you in combination with a band. How did it come about?

Yasmo: I released my first album in 2011, the second in 2013. Then I was still solo or with DJ on the road. That was also always fun and was great. Then slowly with the second album a few doors have been opened for me and I then had the opportunity that I perform with bands. I met Ralph Mothwurf at a jazz poetry slam, where you have five minutes before the event to kind of talk to the musicians and tell them what your poem is about, for example. Then they improvise music to your poetry performance – and it just worked so well! That was a trio at the time, where I thought to myself at the end, ‘Okay, I’m going there now,’ and then I told them that I also make rap music and asked if we might want to do something together sometime. At that time I had no connection at all to the instrumentalist bubble. Ralph then simply set up a band and that’s how it started. That was very nice – and it still is. Meanwhile the Klangkantine is just such a little family. It’s quite something when you have four horns playing behind you. [laughs]

“I DO BELIEVE THAT THERE IS NOW A GREATER UNDERSTANDING THAT ART IS ALSO, you know, WORK.”

In the song “Kunst y’all” from 2013, you rap about the profession of the artist, which is not yet really 100% acknowledged by society. Do you think society has progressed since then in terms of this acceptance?

Yasmo: I can’t speak for society, but I do believe that progress has been made in the art and culture sector. The pandemic was certainly a catalyst there as well. If you’re always socialized to do something that you like to do, and then also serves as advertizing for you, which is why you shouldn’t demand a fee, then that’s a wheel in which you can easily get stuck. Art is indeed work. Artists also have to pay rent and insurance. Something has already changed in the art and culture business. I think there is a greater self-confidence, and I have the feeling that it is also being seen and heard by the funding bodies. The fair-pay debate, which somehow started in the cultural sector, is now a bigger issue. The federal government is also slowly developing a strategy. All the players must always be at the table – both those who create culture and those who pay for it.

I do believe that there is now a greater understanding that art is also, you know, work. In a salaried position, the framework conditions are simply quite different. As a freelance artist, I don’t have fixed working hours, I have to build my own routine. A large part of my work is actually e-mails, bureaucracy, administration, making appointments. At some point, this effort becomes so huge that you’re really just the secretary for yourself and don’t even get to do the actual thing that everyone thinks artists do, which is write a song or a poem or whatever. I think the whole background of being an artist is something you don’t think about very often.

You are part of the new Milka [note: Austrian chocolate brand] campaign #zartstattzwider, you created the poetry slam text of it. How did that come about?

Yasmo: Milka approached me and told me they were doing this #zartstattzwider campaign, if I wouldn’t like to write a text for it. Then they explained to me a bit what the campaign was about and I thought that was great. I think it’s great that a company goes here and just wants to spread positive vibes. Of course, this also has to do with the fact that Vienna and Austria are always considered somehow zwider [note: grumpy] and unfriendly, which I also understand somehow. However, that is mostly just a translation error. I think we are quite polite, you just have to understand the Schmäh [special humor]. [laughs] It sounds so incredibly simple, but I think that unity only works if people are friendly to each other – if they look out for each other, if they show solidarity. That’s where my themes and Milka’s themes coincided extremely well. I also think the campaign is simply super charming, especially because they don’t actually have to do something like that. To go out with the message: “Be delicate instead of zwider,” I think is super.

“I’M INCREDIBLY GRATEFUL THAT PEOPLE WANT TO LISTEN TO ME AND MY MADNESS.”

You are the first woman to win an Ö-Slam [note: Austrian Poetry Slam Championship] and also the first to be nominated for an Amadeus Award in the Hip Hop category. How important are these achievements for you?

Yasmo: It looks great in the press release. [laughs] With the Ö-Slam, that was indeed very important to me, personally. I really wanted to win that once. I won it in 2013. The Austrian Slam Poetry Championship has been around since 2007. I’ve also been a poetry slammer since 2007, and I took part in the first championship. You want to become a champion when you’ve been doing it for so long. At that time I already knew a little bit how to write good texts. I mean, good lyrics are of course something totally subjective. But there are just different craftsmanship tactics that work for a poetry slam audience.

In the end, I actually won and was very happy to be the Ö-Slam champion. At the time, I was also the first woman. The Amadeus nominations are for sure a nice recognition that the work is seen, but it’s not the most important thing for me to receive such an award. It will always be more important to me when I play a concert, even if it’s only a concert for two people, that I can establish a connection with the people who are listening to me. After all, I’m incredibly grateful that people want to listen to me and my madness.

After all, they have to, when they watch the Austrian version of The Simpsons. How did you come to be the voice-actor for Lisa Simpson?

Yasmo: In 2020, ORF did a Christmas episode of The Simpsons in “Austrian”, with Robert Palfrader as Homer Simpson, Chris Lohner as Marge, Paul Pizzera as Bart and me as Lisa Simpson. They wrote to me or my agency and I was rather confused at first, because my voice is actually quite deep – and I’m also not a dubbing artist. But at the time I didn’t even have to think for a second about whether I wanted to be Lisa Simpson. Of course I did! I mean, I come from a Hackler family, I always wanted to learn the saxophone when I was a kid, and maybe I’ll be president! [laughs.]

But then I spent ages looking for a voice for it, I could sort of choose which one to give it. Lisa is not a smoker and I am. After ages of trial and error, with beep voices and all kinds of things, I eventually found a good middle ground, thank God. Apparently, it went down pretty well, so ORF made three episodes with us as the Simpsons family for 2021. I hope there will be more to come, because it’s a lot of fun.

“WE TRIED TO REINVENT OURSELVES A LITTLE BIT ON THE NEW ALBUM.”

You are still very active in the rap or poetry slam scene, you also give workshops, work at cultural events, and host several poetry slams yourself. Are there any new projects in the pipeline?

Yasmo: This year will be completely crazy. In 2022, a historic event will happen in the poetry slam field, because from November 2 to 5, the German-language poetry slam championships will take place here in Vienna for the very first time in its 25-year history – and I’m on the organizing team. It will be huge. It will be awesome. It will be great. The best poets from Germany, Austria, Switzerland, Luxembourg, Belgium, South Tyrol and Liechtenstein are coming. It will be the biggest live literature festival in Europe, so we expect a lot of visitors. Our new album will also be released this fall – finally. We’ve taken long enough with it now.

What can we expect from this album?

Yasmo: A lot. We have tried out a lot, we have written an extremely large number of songs. Only a few of them made it to the album. [laughs] We tried to reinvent ourselves a bit on the new album. For example, we decided to work with two producers, Mirac and Luca Pivetz. With them, we really worked around quite a bit sound-wise. With songwriting we followed quite different paths than before. The new album will be very different, but it will be cool.