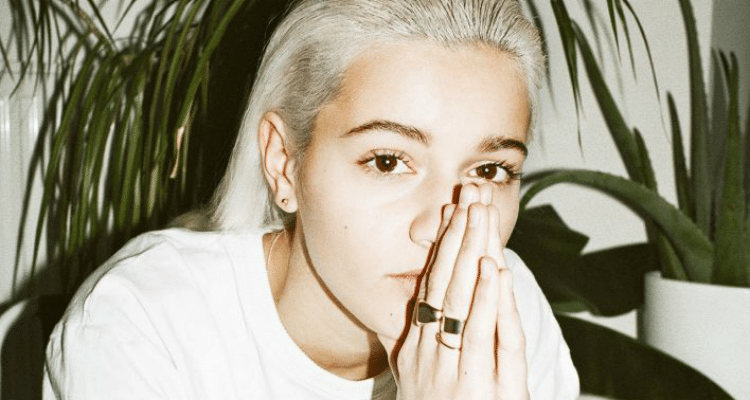 MAVI PHOENIX aka. YOUNG_PROPHET95 is the woman current music pessimists are pinning their hopes on. Originally from Linz, she is now moving on the international stage. Her sound moves fluidly between rap, r’n’b and contemporary pop. “My Fault”, her first EP was released for free download in 2014, quickly followed by a tour with BILDERBUCH. At the end of May she released her second EP “Young Prophet”. She is 21, described by “The Fader” as a “Lo-fi pop heroine” and ready for the big time. Ada Karlbrauer talked to her about visual representation, America as the “place to be”, and “over-autotune” as branding.

How did Mavi Phoenix begin?

Mavi Phoenix: I took part in the Lautstark competition in 2013. But that was just one element among many others. I have always made songs, and that was actually the key. I got better with every song. If you do that for many years, eventually you get to be where I am now. I am not big, but definitely bigger than before.

How would you describe your musical development over the last couple of years?

Mavi Phoenix: I have become more critical. When I used to make a cool song I would publish it right away. Now I am more selective. Now it’s about not losing your cool and instead considering the best way to bring it out. I have gotten an entirely new perspective since I began working with my management. One that I neither knew nor understood before. Now I just have more perspective.

How important is the DIY factor for the music production?

Mavi Phoenix: The factor is there because that’s how we work.

Mavi Phoenix: The title originally came from a song that didn’t make it onto the EP. But it was also chosen because it was so extreme and cheeky. The first question that comes to mind is why I can be so arrogant to name my EP “Young Prophet”. “Who is that and who does she think she is?” But “Young Prophet” has another, completely different meaning for me. I have the feeling that in the last couple of years I have learned more about the world and the various scenes. That was my actual approach!

The aesthetic isn’t just taken from anywhere, it mirrors my reality.

Watching the videos for “Aventura” and “Love Longtime”, it is clear that you focus on your visual staging. What role does the visual play for you in general?

Mavi Phoenix: Visual representation is really important, especially on the international market. If you want to work professionally it has to fit. Of course the music is most important, but it doesn’t hurt when everything else fits too. It’s interesting to hear that it looks like it was staged. Of course, it is, but it also developed naturally. For example, the aesthetic in the videos for “Love Longtime”, “Quiet”, and “Aventura” isn’t just taken from anywhere, it mirrors my reality. But of course, it is expanded or exaggerated.

Despite auto-tune, my voice is connected with femininity.

In YouTube comments it is really obvious that a lot of viewers have a problem with the digital effects on your voice. Sometimes they even call it “over-autotune”.

Mavi Phoenix: I actually like it when someone comments on the voice effects, because that is just what I am trying to do. In the context of a live performance I often hear things like “Why do you use effects when you really can sing?”. But that is the point. First of all, I think it sounds cool. And secondly it is a form of defiance against expectations.

“Hey, can’t you sing without effects?” is something people have always said to me, and that is exactly why I continue to do it. I think to myself, “it’s my music, and if I think it’s cool then I will continue to”. Because, despite auto-tune, my voice is connected with femininity. US rappers like Kanye West use Autotune much more than I do and that is normal, but as soon as a woman decides to use those parameter, it is ok to question it. That’s exactly why I will continue to do it and when it becomes accepted, I will do it differently.

I was always looking to America…

You describe your sound as contemporary pop. How important was and is pop culture and it’s developments?

Mavi Phoenix: I’m referring to US Pop and Hip Hop. I was always looking to America because it’s just the place to be. For example the album “Blonde” from Frank Ocean or the new album from Kendrick Lamar were the things that really grabbed me recently.

You are being celebrated as one of the next Austrian shooting stars next to Bilderbuch and Wanda.

Mavi Phoenix: Of course that makes me happy, but I mostly just ignore it. I just do my thing and in the end you can decide if you like it or not. I just want to make a cool album that reaches an international audience, just outside of Austria. Generally in Europe, it doesn’t have to immediately be America (laughs)…

Ada Karlbauer (adapted from the German by David Dempsey)