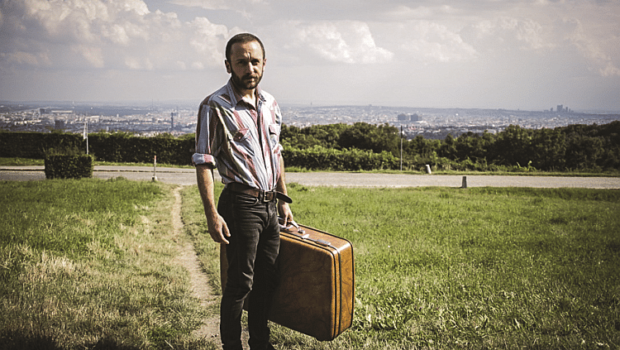 The Austro-American songwriter IAN FISHER will be releasing his next album “Koffer” on November 18th. After writing nearly one thousand songs and playing countless concerts, the well-travelled musician has finally settled down long enough to share his latest creations with his audience.

Born in Missouri, USA, Ian Fisher found that life in the backwaters of the american countryside didn’t leave much to do except to pick up a guitar and write songs. It didn’t take long for him to succumb to wanderlust, leaving St. Genevieve for St. Louis, which offered little more inspiration. And then, as a 21 year old, Ian Fisher left his country for Vienna. It was on the other side of the ocean that he finally felt he had found his home. Vienna was inspiring. Energising. And soon the songs were flowing out of him. But the road was still in his blood and he soon found himself travelling again, playing concerts anywhere and everywhere.

The album “Koffer” (suitcase) was produced somewhere between travelling and packing his suitcase. It is a selection of singles that were written over the course of the last decade and recorded during the last five years.

“I THINK ABOUT THE LIES THAT I COULD TELL“

Whether acoustic or electronic, calm or wild, tender or rebellious, Ian Fischer can do it all. With his guitar and an unbelievable lyrical talent, he conjures up a myriad of emotions, caressing his listeners ears with the reverberations of his baritone voice. And he does it all while maintaining an fundamental sense of peace.

The first song on the album “If You Wanna Stay”, is a cheerfully brash number, full of nonchalance but still relaxed. “Candles for Elvis” is a bit more wild, although it carries on the good mood of the first and is eminently danceable. The title and most surprising track on the album is the third. “Koffer” is a song written and sung in German by an american with an irresistible accent. The mood is unruly. Ian Fisher packs his suitcase and needs to get out of the city and back on the road. A mood that overcomes the listener. The feeling of freedom, the desire to be on the move.

“Settlin’ In” is a particularly special song that sounds like American country and folk. The vocals sound different, and the recording was done differently than the rest, something that has a positive effect on the atmosphere of the song. One of the most beautiful songs on the album is “Hail Mary”. It sounds melancholic but somehow not slow-tempo. Ian shows what his voice is capable of and how he can use it to change and transform the moods of a song. After an acoustic version of “Koffer” the album ends with “Nothing”. Full of vitality and country elements, it is a track that closes the album on a fresh and happy note.