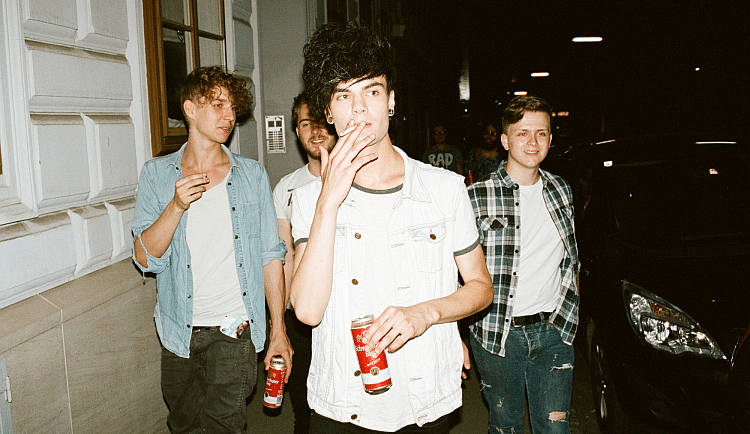 The single “Bad Blood” is already a hit, and the album is sure to be one too. On the 28th of October the Viennese band THE CRISPIES will release their debut album “Death Row Kids” on Seayou Records. Bored with the affluence of the times the band has dedicated themselves to musical excess.

Formed in the basement of guitarist Rob Wolfe in 2014, the band has already made a name for themselves. With the single “Bad Blood” and their stylishly staged appearance they have taken on the image of Sex and Drugs and Rock n Roll and used it to embody the situation of today’s youth: bored and disgusted because they already have everything. But despite being trapped in this excess, singer Tino Romana sings about the problems of his times: “Our generation lives in affluence. Bored and oversaturated from fun they slowly kill themselves with excess.” Bruno Marcus and Peter Ferdinand support his vocals on bass and drums. The style of The Crispies is a mix of pop, punk and rock. They mix their favorite elements from each of these genres into their own personal style.

“The band sounds exactly like what you would expect a bunch of talented-but-disenchanted 20 year-old Austrian garage punks to sound like – but in the very best way possible. With fast-paced riffs and feedback-heavy fuzz, Death Row Kids is a sloppy, poppy knockout. It’s the kind of album that hits the ground at full-speed as soon as it starts, only ending when you wake up reeking of stale beer and smoke, unaware of where your shirt went or what that sticky glob in your hair is. In other words, time with The Crispies is a good time indeed.” (Bitchslap Magazine)

ARE THE KIDS ALL RIGHT?

The opening song of the album, “Outta the Sun” sets the tone for the rest of the record: Wild, unbridled, and rebellious. Tino doesn´t so much sing as exclaim the lyrics, his voice distorted with effects as though he was singing through a bullhorn. The shortest but coolest number on the album is “Keep on Going”. It’s a fast track that gets your heart beating like a shot of pure adrenaline. The atmosphere of the song is thick with the feeling of stubborn teen fighting against the entire world. It’s a song about drugs, excess, and the lack of any alternative to succumbing to total ecstasy. “Noose’N’Go” is the second single and the fifth track on the album. A song about an obsessive ex-girlfriend. The tempo is somewhat slower than the previous tracks, but still manages to move along. Tino Romana uses his almost piercing vocals to embody the emotional desperation of the girl, singing over a calm and laid-back guitar line .

“Pearl” on the other hand is a happy track with guitars sliding around the melody like a broken shopping cart in the supermarket. The song is loud, boisterous and bursting with energy. The album closes with “Drowning Horse”. A worthy finale in which the four twenty year olds let loose on their instruments clearing the ear canals of their listners in good old rock n roll style.