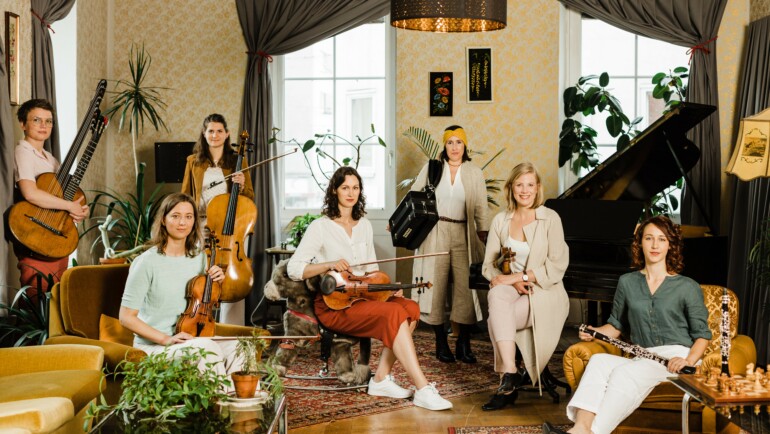 The Krems festival IMAGO DEI 2022 “IN-BETWEEN WORLDS” will take place from March 11 to April 18, with 16 concert evenings at the Klangraum Krems Minoritenkirche and three collaborative events in Vienna and St. Pölten. It is the first edition under the artistic direction of NADJA KAYALI.

Nadja Kayali puts in her first season for the festival Imago Dei under the title “In-between worlds” – these are spaces within us that we usually only pass through and rarely inhabit. In-between worlds are as imaginary as they are real, they give us the opportunity to leave the familiar and thereby experience something new.

Sixteen concerts are on the program at the Klangraum Krems Minoritenkirche until Easter Monday: all in-house productions, new projects and works commissioned by the festival from and with artists living in Austria, representing very different stylistic and cultural sound worlds. One focus of the programming is also to give the festival a strong female signature.

FROM IMAGO DEAE TO DIVINERINNEN

With the opening production “Imago Deae” (Image of the Goddess) the festival starts its focus on the lively domestic female music scene on March 11: About 50 participating artists, who come from different sound worlds, create something new together (musical direction: Nataša Mirković & Beate Wiesinger). With a matinee of the Divinerinnen, the festival celebrates its conclusion in dance (Apr. 18). The beautiful play on words in their name allows Viennese music to shimmer through and fits almost magically into a festival called “Imago Dei”, which with the new program line “Imago Deae” invites, above all, female musicians to get the spotlight they deserve.

Large-scale commissioned works were given to the festival composers Wolfgang Suppan and Tamara Friebel. Tamara Friebel has used specific proportions of the space of the Minoritenkirche as the basis for her full-length choral work “Illuminations” (Mar. 12).

For his work “Welten…auseinander” (“Worlds…apart”) for ensemble and electronics, commissioned by Festival Imago Dei, Wolfgang Suppan let himself be guided by the view into the distance, which in the end always directs the view to one’s own (Mar. 26).

PRODUCTIONS FOR THE WHOLE FAMILY

With “Gold!” (Apr. 3) by Leonard Evers/Flora Verbrugge in a production by Angelika Messner, the festival is producing its own children’s opera for the first time. Based on the famous fairy tale “The Fisherman and his Wife” by the Brothers Grimm, this work touches with catchy melodies, poetry and depth. Two matinees (Mar. 27 and Apr. 18.) invite you to start the day swinging together with the whole family. Special prices for children and teenagers!

Short concerts in the early morning during Holy Week (11-16 Apr.) invite especially the people of Krems to get in the mood for the day with texts and music together with members of the Company of Music and Nadja Kayali. (Admission free!)

A thematic focus with a total of four events (Mar. 30, Apr. 1 – concert/reading and film, Jun. 2) is dedicated to the Polish composer Simon Laks, who survived the Holocaust as leader of the camp orchestra in Auschwitz. With a commissioned text to Doron Rabinovici. It is the beginning of three years of the series “Zwischentöne Polen” (“Intermediate Notes Poland”).

A free shuttle service to and from the Krems train station will make it easier to travel to the evening concerts by train. All evening concerts start at 6pm. The duration of the concerts without intermission are 70-90min. A friends association was newly initiated and for the first time there is an Imago Dei Festival wine of the winery Türk.

In-between worlds, those are spaces within us that we usually just pass through and rarely inhabit. In-between worlds are as imaginary as they are real; they give us the opportunity to leave the familiar and experience something new. It requires courage to engage with the unknown, and that is exactly what I would like to invite you to do! What awaits you in the approximately 20 events is indeed colourful and diverse – no two concerts are alike, and all are in-house productions exclusively for this year’s festival edition. Each evening and each morning (because there are matinees and really early morning concerts, too) brings a premiere, which links a basic musical idea with the ideal artists to realise it. I had the pleasure to already enjoy the company of the wonderful people whose works combine music, poetry, dance, and drama during the months of preparation, and it is all the more wonderful to be able to share this feeling with you soon. Quite frankly, I can’t wait to finally see our meticulously planned ideas become reality!

Imago Dei kicks off with the programmatic concert evening Imago Deae with about 50 female musicians from a range of very different musical worlds, who unite choir/vocals, folk music, and jazz into a vibrant sphere of togetherness. Women’s artistic energy and creativity play an important role for me and are granted generous space in many projects. Another guiding principle behind my ideas was the special setting of the Klangraum Krems Minoritenkirche: as a departure point for a new composition, but also as a theatrical place to be traversed, as in Scriabin’s Mystery with piano, dance, and puppetry.

Another project, a matter of the heart and actually a “festival within the festival”, is dedicated to the Polish composer Simon Laks. In addition to the Austrian premiere of his three string quartets, his moving text about “Mélodies d’Auschwitz” will be performed, as well as a literary premiere by Doron Rabinovici. Literature and music also merge in sounds from Syria and words from four Syrian poets living in Austria. As an Austrian with Syrian roots, I am very happy about these strong signals of Syrian-Austrian music and poetry.

With Tamara Friebel and Wolfgang Suppan, I was able to commission two “festival composers” this year, not least due to the generous support of private sponsors and the newly founded “Association of Friends of the Imago Dei Festival”. Of course, I would be delighted to win you as a friend as well!