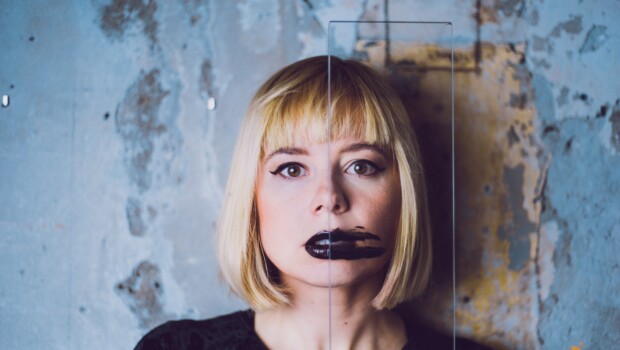 BAIBA DEKENA is originally from Latvia, but has been living in Innsbruck for 7 years – the Tyrolean dialect is unmistakable. In May 2021, BAIBA released her second album entitled “Lighter” (Super Plus Records). The musician combines deep lyrics with danceable beats and creates an exciting overall concept. Itta Francesca Ivellio-Vellin spoke to BAIBA.

Your album is called “Lighter”, like one of the songs on it. No other song of yours has as many different versions as “Lighter”. There are two versions on the album, and when you performed at Sofar Vienna you played a very reduced version on the piano. Why does this song mean so much to you?

Baiba: A lot of things happened at the same time, and that somehow changed my music, me as an artist and also me as a person. The lyrics in “Lighter” address kind of breakthrough. I grew up in Latvia, in a very conservative environment, in a very small village. For a long time, I had the feeling that I didn’t have any options in life. I never thought that I could live in or travel to Austria or earn money with music. In Latvia, a woman can be a singer, or be part of a band, but I don’t think I could be empowered enough to do my own thing. But three or four years ago, something changed in me. I was always rather shy and had the feeling that I wasn’t good enough and that I couldn’t produce music myself and perform alone, but then I decided that I wanted to fight for it and try it. I wanted to produce music myself, write lyrics and compose melodies myself. Now, I even edit some music videos myself. I just have a whole new sense of self. And the song “Lighter” also addresses that, for example the passage “I remember times they told me I should find someone to show me”. And that just went well with the overall concept of the album, including the cover image.

On the cover you can be seen in a tub and there’s a lovely a pink frame.

Baiba: Yes, exactly, I am sitting in this black water and look rather depressed, but then these pink clouds come and create a new perspective. I haven’t quite got there yet, but the whole album reflects that process. In a playful way, I wanted to get out of all the difficult things in my life that had happened to me. This is my second album now, the first was completely different, much more melancholic, slower and sadder. With the second album I wanted – not only but also – to have fun. I also wanted to show people that the same topics, the same longing can be expressed differently.

In the video that was made during your appearance by Sofar Vienna, you announce the song “Lighter” with the words “The next song is called ‘Lighter’ and it’s for those who always think they know what we want”.

Baiba: Yes, the album is of course my very personal story, but for me it is also a bit “good girl gona bad”. Listeners will probably not hear it that way because it is a pop album after all. But for 20 years, I was told again and again how to act, how to act like a girl, and I’ve had enough. That is also something that I express with “Lighter”: We know what we want and we can be anything we want. We can be housewives and we can be music producers – anything that feels good for yourself is allowed.

When did you move to Austria?

And why exactly to Austria?

Baiba: That was actually a coincidence. I finished my studies in Latvia, cultural management, and then I looked for a job abroad through the European Solidarity Corps and found Die Bäckerei in Innsbruck. I was only planning on staying for a year, but I just didn’t go back after that. The job in Bäckerei was just so great, the cultural program and the concerts that I organized – and still do – and the city festivals. Then I met my producer, Christoph Holzknecht, and Benjamin Leingartner from Super Plus Records and I was really excited about the way people work together. Latvia is pretty small and there is a fair amount of competition. In Innsbruck, I got to know a different way, because here, people tend to say “Cool, you’re doing something, I do something too, let’s do something together!”. I wasn’t used to that!

Baiba: Absolutely no regrets. Without Innsbruck I would probably have ended up in a folk music club somewhere in Latvia.

Can you briefly explain what Die Bäckerei in Innsbruck does and what exactly your job there is?

Baiba: Die Bäckerei is a cultural centre that is actually quite big. We have a kind of open house, we also have a co-working space, art studios, etc. Everything on a sustainable basis and in a do-it-yourself style. Food sharing, all sorts of things. And a very diverse cultural program. Before Corona, we had around 300 events a year, so something happening almost every day. There are regular formats such as Lindy-Hop or the bike workshop. Then there are our in-house formats, all of which I have actually developed. These are open mic sessions like storytelling and comedy nights. I basically work in Bäckerei as a cultural curator and project manager.

I also saw that you hold workshops there yourself? On the subject of music production?

Baiba: Yes exactly, we only started these workshops a few years ago. Benjamin Leingartner from Super Plus Records has another project, the Modular Music Academy, an educational program, and we decided that it would be cool to also offer workshops, and only for FLINTAs. There is the same problem in Austria as in Latvia, namely that the quota of women in music is so low, especially in technical professions. We were also at the MENT Festival once, and that was the topic of a panel discussion. Then there were comments from the audience that there are just so few female musicians and that it is therefore not possible to book any. I just sat there and thought “Are you serious now?!”. And even if it were true, it only means that there is a huge problem in the education system! I talked to Lisa from Little Element, and she had the same idea at the same time and now we’ve been organizing these workshops for two years. There are great young women sitting in these workshops, some of whom are super shy and don’t trust themselves, but then they show their beats and I’m just sitting there, thinking to myself, “Okay, I can actually go home now!” [laughs]

Personally, I find your new album very empowering, I like to hear it while running, because it’s so motivating. How has the general response been so far?

Baiba: Wow, thanks for the great compliment! Yes, it used to be that people often cried at concerts. Now they are actually dancing to my music [laughs].

I can imagine, your new album is a lot more pop than your earlier stuff.

Baiba: Yes exactly, that was also the plan. I am a big fan of good pop music and I also believe that making good pop music is not easy. Now that I can produce myself, it’s even more exciting to listen to pop music, because I can then better recognize the individual sounds. I can analyze and learn a lot more, it’s an exciting process.

Then how do you go about making music yourself?

Baiba: That has changed a lot now. I come from the classic singer / songwriter corner and back then I always wrote a melody on guitar or piano, then came the vocals, then came the lyrics. Now, with the production, I noticed that that was quite restricting, these classic structures of verse-chorus-verse-chorus. I myself listen to a lot of Russian pop music, it has very special sounds.

Do you understand Russian?

Baiba: Yes, I like Russian very much. At some point I was very in love with Russian literature and all that. The art scene in Russia is also extremely exciting, even in Soviet times. The synth sounds that are known in Western Europe were also available in Russia, only in a more exciting way. It often happens that I hear something while running or cycling and then I think, “Oh, what is this now? That sounds so cool,” and then let it inspire me. Then I often start with a bassline. In the case of “Boy from Murcia”, I just wanted to use a synth sound, something that is a bit more disco. Then I built the song on that, the structure came after that. Some of the songs on the album are actually produced only by me and some with help. Sometimes I go to Christoph Holzknecht or Benjamin Leingartner with a finished structure, and we then finish the song together.

Apart from Russian pop music, where do you get inspiration from?

Baiba: I like Beyoncé very much, also Dua Lipa, really commercial things. But I also have this completely alternative soul that makes me a fangirl of Nick Cave and Leonard Cohen. I think the new things from Ben Howard are great, and in general everything that goes in the direction of Dream Pop. But I don’t make music like that myself. I don’t really know what I would compare my music with.

I thought a little about The Naked and The Famous. Would you agree?

Baiba: Uuuh, I very much agree! That’s great! I also really like London Grammar and stuff like that. I also want to do a punk-pop song somehow, I like that genre a lot too. In the beginning I always took myself too seriously. That has now changed too, and I have a lot more fun and experiment a lot. It doesn’t always have to be perfect. The playful part is more important to me now.

You mentioned “Boy from Murcia” before. What is your connection to Murcia?

Baiba: I was there on vacation a few years ago and fell in love in a very classic way. In any case, my heart was broken then, the breakup was bad. But the time I spent there with my friends was so nice and the whole experience somehow showed me that not all romances have to last, sometimes it’s just a short exchange, and then it is no more. That’s what “Boy from Murcia” is all about.

Do you think your boy from Murcia will hear that song?

Baiba: He definitely knows that the song was made. We are still in contact and friends.