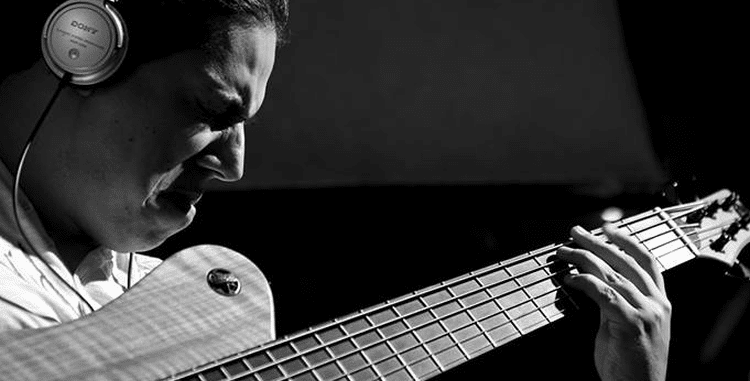 This certainly does not happen every day: An album created and recorded in Austria is nominated for a Grammy. This feat was accomplished by the Colombian native Juan Garcia-Herreros, who has been living and working in Austria since 2004. “NORMAS”, the title of his third album released with his project SNOW OWL, is nominated for the Latin Grammy in the category “Best Latin Jazz Album”. The award ceremony will take place in Las Vegas on November 20, 2014.

Born in Bogotá, it was clear from an early age that Juan Garcia-Herreros would one day pursue a musical career. Initially still practicing on the flute and the piano, he discovered the electric bass after moving to Florida with his family. It was love at first sight. He taught himself how to play, and that so well, that quite a few people recognized his exceptional talent and supported him henceforth. His path then led him to the legendary Berklee College of Music in the Big Apple, where he performed with numerous stars such as Al Jarreau, Elton John, Christina Aguilera, David Newman and Lalo Schifrin.

Not only the sideman of world stars…

Soon the role of the sideman was not enough for the ambitious bassist and composer. The Colombian musician wanted to pursue his own project in which he could realize his deep musical passion for Latin Jazz. Thus, in 2004 he decided to leave New York and pitch his tents elsewhere. Why his choice fell on the Austrian capital of Vienna, which at the time was certainly not the breeding ground for Latin Jazz, can be easily explained by the fact that Juan Garcia-Herreros sees himself as an ambassador of this genre.

…also an ambassador of Latin Jazz…

The Colombian, who is now one of the very few in the world that can virtuosically play the six string bass guitar, wanted to make Latin Jazz popular in areas that were not particularly familiar with this specific genre. As it turns out, this decision has proven to be the right choice. Garcia-Herreros, now also ennobled with a cover story by the international Bass Musician Magazine, quickly made friends in Austria and became acquainted with some of the leading musical minds in the country, which further enabled him to launch his own project SNOW OWL.

…and reformer of the genre.

The big goal of the now 36-year-old is to transfer traditional Latin Jazz into the present time. With his new album he raises the question of how musical standards – hence the name “NORMAS”, Spanish for standards – would sound today. More than simply reciting the already known, Garcia-Herreros has dedicated himself to a cross-genre interpretation of Latin Jazz, together with his prolific band members (Mamadou Diabate, Roberto Quintero, Klaus Dickbauer, Jeremy and Jonathan Powell, Sabri Tulug Tirpan and Stoyan Yankoulov). Never shying away from unexplored paths of musical styles and genres, he  includes a lot of modern music and extends the classic sound of Latin Jazz with various world music and innovative rhythmic elements.

This open musical approach has clearly found many fans and is underlined by the Grammy nomination for his album “NORMAS”.