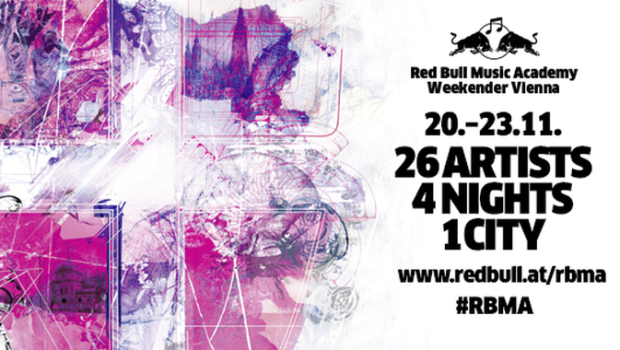 For over 16 years Red Bull Music Academy (RBMA) has been devoting itself to the exploration and promotion of upcoming international music talents. First started in Berlin in 1998, the RBMA is held in a different music city each year. In the context of lectures, workshops, joint sessions and concerts, 60 selected musicians get the opportunity to expand their horizons and to network internationally. This year’s Red Bull Music Academy will take place October 12 – November 14 in Tokyo.

This year the Austrian edition of the RBMA Weekender will take place in Vienna from November 20-23, 2014. The performing acts include the US producer legend Theo Parrish and SOHN, who is currently taking the world by storm with his music. Locations such as the “Arena”, the “Pratersauna” or the “Casino Baumgarten” will serve as the venues of this year’s most spectacular get-together in the Austrian electronic scene.

The event series will start on Thursday, November 20, with a kick off in the Viennese club “Celeste”. Headliner: the British producer Emika with a DJ set. Besides the first lectures on Friday (November 21),  the big club night will take place in the “Arena” with top acts such as Portugal’s Kuduro band Buraka Som Sistema. The day after, the American techno visionary Theo Parrish will hit the decks at the “tech. Gate Vienna” (“UNO City”). Also performing: The British producer Doc Daneeka and Benjamin Damage. Saturday will be celebrated at the “Pratersauna”. Part of the line-up: American rapper Zebra Katz and British DJ Melé.

The finale on Sunday (November 23) will be concluded at the “Casino Baumgarten” with one of the biggest concert highlights of the year. The two electronic acts SOHN and Dorian Concept will grant the audience a deep insight into their work in a concert session. SOHN is THE discovery of recent years. He stormed the international charts with his debut album “Tremors”, and his single “Artifice” received over a million views on YouTube. The composer and producer Dorian Concept is a luminous figure in the local electronic scene and will present songs from his latest album “Joined Ends”. Also on stage: the post-dubstep newcomer Phoebe Kiddo.