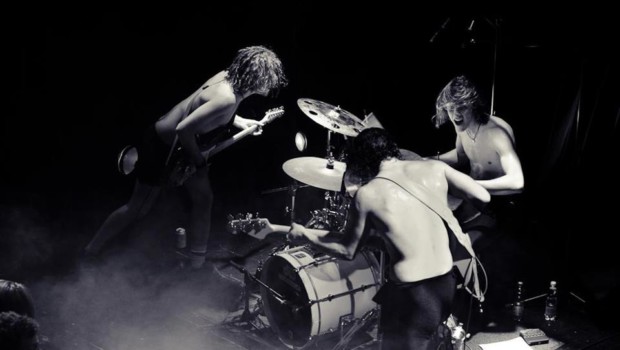 Despite all doomsayers, old school rock music is now more alive than ever. It is mainly bands like Mother’s Cake from the mountainous Tyrol who prove that this often presumed dead style of music is fortunately finding followers in increasing numbers. It is above all music fans from younger generations that are discovering ’70s inspired rock music as an exciting alternative to the monotony of today’s guitar-oriented music.

Setting their first impressive mark in this country with the immensely powerful debut “Creation’s Finest” in 2012, the three Tyrolean musicians Yves Krismer, Benedikt Trenkwalder and Jan Haußels have long since been able to make a name for themselves in rock circles outside of Austria. So far the high point of the band’s career, which began in 2008, will probably follow this February. Mother’s Cake will embark on an extensive tour through Australia, which will be an excellent opportunity for the likeable trio to increase its international popularity even further.

One thing can definitely be said about Mother’s Cake: the simple copying of any popular sounds or current trends does not exist in their world. Evading everything “indie” and “alternative”, Yves Krismer (guitar, vocals), Benedikt Trenkwalder (bass) and Jan Haußels (drums) rather celebrate the art of guitar-oriented music that was at its height in the late ’60s and early ’70s of the past millenium. It is no secret that their preferences lie in the sounds of legendary bands like Led Zeppelin or music history icons like Jimi Hendrix. And yet even if the three Tyrolean musicians would be cagey about this, it wouldn’t make any difference, because their outstanding skills on the instruments and their undeniable talent in songwriting speak for itself and allow them to set their very own musical course.

Refraining from the common practice of today’s usual rock song structures, Mother’s Cake tread more “progressive” paths and give their songs the necessary time and space to fully unfold. Sometimes this implies longer, steadily increasing instrumental passages that build up to a climax or spontaneous and unexpected musical turns. The mastery of this combo, which has come around quite far concert-wise in Europe (performing among other countries in Germany, Hungary and France), lies in the seamless sound of each song. The multi-faceted and dynamic guitar skills combined with the truly distinctive and memorable voice of frontman Yves Krismer, the edgy bass work of Benedikt Trenkwalder ranging from funk to punk, as well as the intricate and always driving drums of Jan Haußels interweave themselves in the tracks to a richly varied and above all infectious whole, which especially convinces live on stage.

The sound that Mother’s Cake ultimately puts forward is a refreshingly dynamic and very unique testament to rock history, but, and this is where the beauty lies, never comes off as retro, frumpy or outdated. It is rather the opposite, the music comes across as very modern and contemporary. Let’s hope that these three guys are still far from reaching the end of their creative journey and continue to keep us on edge waiting for more.