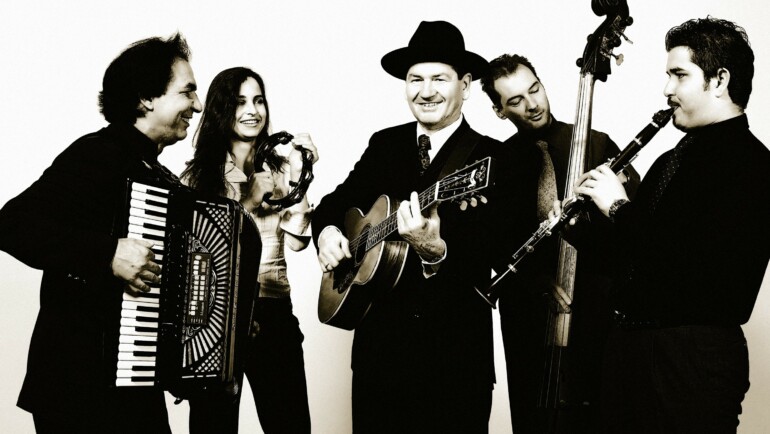 For the past two decades the Wiener Tschuschenkapelle has played an integral part of Austria’s music history. This unique formation has taken up the cause of peacefully coexisting with different cultures and serving as a musical ambassador of the local music scene in Europe. Founded in the late 90s, the award-winning band around the singer and band leader Slavko Ninić is jointly responsible for bringing Balkan sounds into domestic concert halls. A close look at the incredible stylistic and cultural diversity in Austrian music reveals that this is a pioneering achievement of inestimable value.

Far from home, the people who came to Austria in the 70’s and 80’s have always tried to maintain their cultural identity, at the very least on a smaller scale. Music always played an important role in this context and served as a social catalyst. The so-called guest workers didn’t exactly have an easy time in Austria and were sometimes even regarded as second-class citizens. Slavko Ninić was one of those people who wanted to escape the dreary everyday life through music. In accordance to his humanistic understanding, he founded the Tschuschenkapelle to make room for people from diverse cultural backgrounds. The name “Wiener Tschuschenkapelle” was deliberately chosen to deprive the hardness of the swearword “Tschusch” and replace it with an ironic self-designation.

From the outset, the music embarked a path that led away from traditional stylistic terms. The diverse backgrounds of the members were crucial for the outcome of the music. Besides the Croat Slavko Ninić, the initial line-up consisted of musicians from other Southeast European countries. All of the band members grew up with different musical traditions and participated equally in the creation of a diverse overall sound, which primarily found its expression in an enormous variety of styles. The hundreds of songs by the now highly acclaimed Wiener Tschuschenkapelle (among many other awards, the band received the German Record Critics’ Award in 2001 in the category “Ethnic, World”) include traditional Balkan influences, Austrian folk music, traditional Roma music, as well as sounds from the Mediterranean area. Even elements of classical music can be found in the thrilling and immensely vivid pieces. With a lot of imagination, one may even go so far as to describe the Viennese formation as one of the first crossover bands of the country.

Overall, the band can look back on two immensely prolific and successful decades. The Wiener Tschuschenkapelle have achieved well over ten, always highly acclaimed, releases, have collaborated with numerous artists (including collaborations with accordionist Otto Lechner and the singer and entertainer Willi Resetarits), and have toured the world, which ultimately resulted in the term “Wiener Tschuschenkapelle” becoming a byword for music that conquers all borders. However, the Viennese band, which currently consists of Slavko Ninić (vocals, guitar) Mitke Sarlandžiev (accordion, vocals), Hidan Mamudov (clarinet, saxophone, vocals), Maria Petrova (drums, percussion) and Jovan Torbica (bass, electric bass), had to wait a long time until they were able to tour through the Balkans. To commemorate the 20th anniversary of the Wiener Tschuschenkapelle, they finally returned home in 2009 and documented this joyful occasion on film.

Fortunately, nothing has ever altered the optimistic and hopeful attitude of the Wiener Tschuschenkapelle and this can be heard in their music. With their everlasting devotion and energy, their imperishable enthusiasm and incomparable openness, Ninić Slavko and his colleagues always know how to inspire their audience. The story of the Wiener Tschuschenkapelle is far from finished and there are still many, many exciting and interesting chapters to be written.