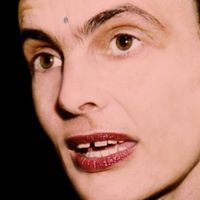 Electronic instruments are often described as mechanical and cold. However it is exactly this physical cold that breathes life into an analog synthesizer. It is the temperature fluctuations that lead to the detuning of the oscillators – the “heart” of the sound machine, as Elisabeth Schimana rhapsodizingly describes the essential components of the instrument. Unlike acoustic instruments, it is not always clear to the recipient how the sounds evolve. Beside knowledge of the sound machine function, it is the missing physicality, which is often an important means of communication between audience and performer  in classical instruments. On the contrary to the common impression, in the booklet of Schimana’s “infernal machine” the media scientist Ute Holl describes the relationship between musician and sound machine as an emotional unity.

This may be due to several factors, such as the intense engagement required to learn the instrument. The knowledge about the functions of the components is just as necessary as the time-consuming experimenting and exploring of the sound possibilities, to be able to produce the desired sound with all of the buttons, knobs and cables. This is probably the reason why Schimana attributed to the synthesizer that it teaches to listen with the ears and not with the head. After all, one can not rely on pre-existing musical material and entrenched sound ideas, but is rather confronted with the sonic results that are to be further developed.

When Elizabeth Schimana interacts with the device, it becomes clear that she is a master of her field. For example in the already mentioned work “infernal machine”, in which the pianist Manon Liu Winter plays the keys on the two manuals, while Schimana skillfully connects the respective circuits in order to alter the roaring, crackling sound. In the repetition of short passages, which characterize a number of Schimana’s works, there are constant changes that reflect the previously heard in fine facets. Subtlest nuances can also be found in the composition “den Zwischenraum bauen und eine Kruste bilden vom Fließenden”.  The title brings plenty of room for associations that may be associated with the quiet, slowly evolving sounds. And in this sense, not only the performer but also the listener is animated, to listen carefully and find out where the acoustic path of the small changes and sensitive shimmers leads to. Although the sound can sometimes get brutal, Schimana never relys on the volume factor.

Schimana’s passion does not stop after the creation of her own works. To get to the bottom of the history of electronic sound production and to research lost, forgotten technologies, she founded the Institute for Media Archeology in Hainburg, which focuses on the embedding and theoretical reflection of current art productions in a historical context. Particularly women’s works are brought to the center, since the female representatives of our society still play – emancipation or not – a marginal role in the public field of electronic music. Thus, this initiative has set a major step in providing a remedy for in these circumstances. In addition, she also focuses on the gender issue in her radio art and shows, for example in her collaboration with Tamara Wilhelm in “Good News in the quota journal”, how unequally promotions of the countries are distributed between men and women. And so, the project will hopefully help to ensure that in the near future art (as well as any other service) will be free from gender issues and other external criteria.
Doris Weberberger