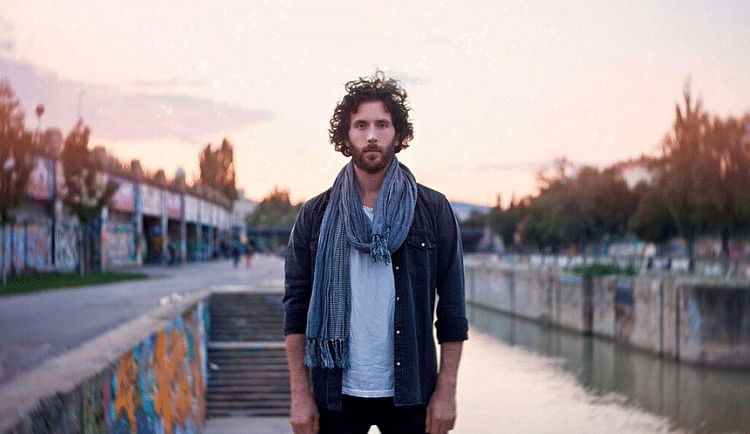 Their name could be a subtle criticism of the classic band mentality or a flirtatious shout-out to old fashioned hippies. But whatever the case may be, the foundation behind the facade of THOSE GODDAMN HIPPIES is built upon a modern and intense sound.

Tom Marsh is a Vienna based British expat. He is also the creative head behind THOSE GODDAMN HIPPIES. A singer with an authentic and powerful voice. The kind that gets under your skin. He pours his heart and soul into the vocals and lyrics and easily strikes a chord with the listener. The results have attracted a considerable audience. And it looks like they will continue to do so in the future.

.
The help of David Leisser and Mike Seidl on live performances helped transform the project into a trio. A trio that released a self-titled debut EP in May on 61 Seconds Records. Their music is an elegant mix of electric and acoustic elements. A combination of singer-songwriter attitude and easily digestible beats. They have built a very modern sound based on indie guitars, funky bass-lines and impressive synth sounds. Tom Marsh spent four sears on the road as the drummer for IAMX. So it shouldn’t be too surprising that the music also features lovingly crafted acoustic drums masterfully combined with electronic beats. For anyone brave enough to share so much of himself and his melancholy through his vocals, the step forward from behind the band to centre stage can’t have been too hard.

THOSE GODDAMN HIPPIES impress with their professionalism. That is not really surprising considering Tom Marsh’s musical history. The professionalism is obvious in the  production values of the EP. It is even more visible in the impressive video to “Drift”. Filmed in a “warehouse- at-daybreak” aesthetic, an armada of attractive young people with perfectly trimmed beards and sparkling eyes dance passionately about their newfound freedom. These ingredients provide the perfect visual accompaniment to a very well done track. The result is a truly thrilling combination. But despite the familiarity of the elements, comparisons to other artists is difficult because they are combined in such a refreshingly original manner.

Emotion oozes out of every pore of THOSE GODDAMN HIPPIES. The mood dances along that magical tightrope between practiced cynicism and tentative optimism. And all the signs point to a potential for a wide public appeal. The meticulousness and professionalism of the bands presentation have resulted in positive feedback and tours in Europe. After the EP we can expect an LP to follow and that can only open the floodgates to fame even wider. Because this band has their finger on the pulse of the modern twenty-somethings. And they are ones who just might be the new hippies.

Sebastian J. Götzendorfer (adapted from the German by Dave Dempsey)