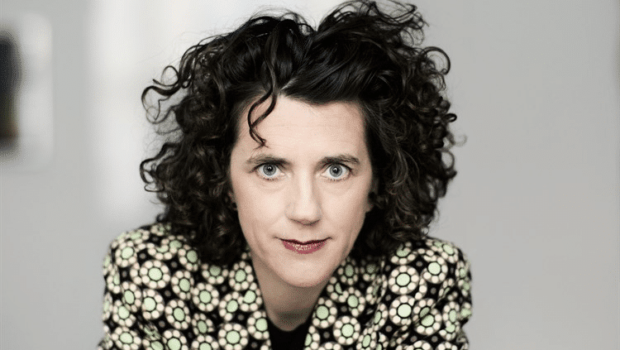 OLGA NEUWIRTH, pioneer of new music, celebrated her 50th birthday in August 2018. On this occasion, the festival WIEN MODERN (Oct. 8 – Nov. 30 2018) shows one of Neuwirth’s central works in a revised edition. The Outcast: Olga Neuwirth 50.2 will premiere as one of the festivals highlights. Due to this year´s festival theme “Security” Austrian Music Export will host an international  round table focusing on concert promotion and risk-taking.

Olga Neuwirth gained international fame with her diverse compositions which inspire critical thinking. Moreover, she never misses an opportunity to draw attention to the situation of women and female artists in Austria. Music is her language and her compositions are just as varied languages. Olga Neuwirth consciously wants to challenge boundaries, cause the audience to hesitate, and make them think. “Contradictory and ambiguous things must be brought to light so that our brains burst instead of being petrified“, Neuwirth mentioned in a speech for the opening Symposium 2006 of “Salzburger Festspiele”. She uses electric music, film, and theatre to unite visual and acoustic symbols that transcend genres. This diversity stems from her interest in science, architecture, literature, film and the visual arts. “For me personally, the meaning of music cannot lie in lulling people with promises of a common bond bridging all borders and making them docile.

Born in Graz in 1968, the composer began trumpet lessons at the age of 7. Not surprising as a member of a musical family. Since she had to hang up the instrument due to a serious car accident, she devoted herself to composing. In 1986 she studied painting and film in San Francisco at the Conservatory of Music and Art College, before continuing her studies at the Hochschule für Musik und Darstellende Kunst and at the Electroacoustic Institute in Vienna. Her encounters with Adriana Hölszky, Tristan Murail and Luigi Nono provided her with essential musical inspiration. She achieved international fame in 1991 when she composed mini operas based on texts by her long-time friend Elfriede Jelinek. Her diverse compositions have been performed worldwide and she has been awarded numerous artist residencies and prizes, including the Grand Austrian State Prize. The highlight of her career was the invitation to the “documenta 12” in Kassel.

She also found clear words in her opening speech for the Steirischen Herbst 2003, in which she drew attention to the struggle as an artist in contemporary music and as a woman in an industry that is still dominated by men. “A cultural policy that only reacts to economic hardship tries to adapt to mass tastes and thus suppress individuality”. And as a woman in music, she is confronted with “this mistrust and fear that a new piece might become embarrassing or a scandal with every new commission – and that is in the long run a bit exhausting and gruelling”. Every composer experiences highs and lows. “But I don’t think I can afford a slip as a woman. Then it would be over” (Valie Export).

When she was awarded the Grand Austrian State Prize as the youngest laureate in 2010, she was the first and so far only woman to do so in the field of music after 60 years.

A break is not planned for the power woman. At the moment she is composing “Orlando” for the Vienna State Opera. An opera based on Virginia Woolf, another strong woman which is due to celebrate its premiere in December 2019. One day after her birthday, “Aello – ballet-mécanomorphe” celebrated its British premiere at the Royal Albert Hall with soloist Claire Chase, the Swedish Chamber Orchestra and conductor Thomas Dausgaard. “What a pleasent present!” writes Neuwirth on her website. For autumn 2018, one can look forward  to the presents Wien Modern has set on the programme.