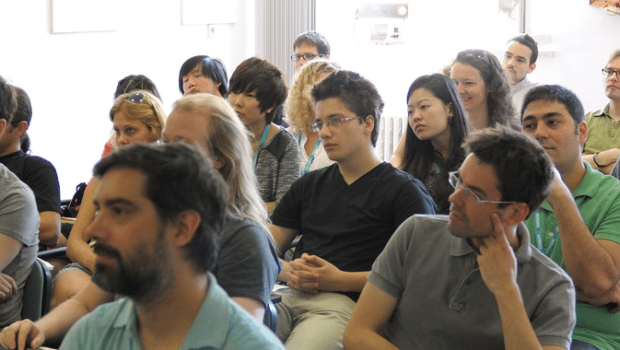 Ostrava Days is a three-week long institute (August 10 – 29, 2015), which culminates into a 9-day festival (August 21 – 29, 2015). It is a working environment with a focus on compositions for orchestra. With two resident orchestras – the 95-piece Janáček Philharmonic Orchestra and Ostravská banda (circa 35 musicians) – as well as a score of chamber ensembles, conductors, soloists and 35-piece choir Canticum Ostrava, it is one of the largest events of its kind in the world. It is organized biennially and since its inception in 2001, it has made a significant contribution to the music of today.

In addition to crucial compositions of the last fifty years, the festival will also premiere works by the youngest generation – the Ostrava Days Institute residents, students and graduates of high-prestige universities who come to Ostrava from all over the world. This year, the number of applicants reached a record number – unfortunately, the institute could only admit 35 participants.

Peter Ablinger was born in Schwanenstadt, Austria, in 1959. He first studied graphic arts and became enthused by free jazz. He completed his studies in composition with Gösta Neuwirth and Roman Haubenstock-Ramati in Graz and Vienna. In 1982 he moved to Berlin, where he initiated and conducted numerous festivals and concerts. In 1988 he founded the Ensemble Zwischentöne. In 1993 he was a visiting professor at the University of Music, Graz. He was also a guest conductor of ‘Klangforum Wien’, ‘United Berlin’ and the ‘Insel Musik Ensemble’. Peter Ablinger has been working as a freelance musician since 1990. In 2013 he started lecturing as a research professor at the University Huddersfield.
http://ablinger.mur.at/

Johannes Kalitzke is a composer and conductor who was born in Cologne in 1959. After studying piano and church music in Cologne, he enrolled at the Cologne University of Music. This was followed by a scholarship for studying with Vinko Globokar at the IRCAM in Paris. Besides his numerous activities as a conductor and composer, he has been teaching at the Darmstadt Summer Courses since 1996 and leading conducting seminars at various institutes. Today he is a regular guest conductor and composer with orchestras and ensembles at international festivals of contemporary music. He lives as a freelance artist in Cologne and Vienna.
http://www.johanneskalitzke.com/

Born in 1957 in Linz, Austria, Lang finished high school and piano studies at the Bruckner Konservatorium and then moved to Graz to study jazz piano, arrangment and classical piano. After graduating from his piano studies, he began studying composition with Polish composer Andrej Dobrowolsky, who introduced him to the techniques of contemporary music, and Hermann Markus Pressl, who taught him counterpoint and introduced him to the work of Josef Matthias Hauer. Since 1988 Bernhard Lang has been teaching music theory, harmony and counterpoint at the University of Music and Performing Arts in Graz – since 2003 he holds a professorship in composition. His numerous works are frequently performed at renowned festivals. Bernhard Lang currently lives in Vienna.
http://members.chello.at/bernhard.lang/