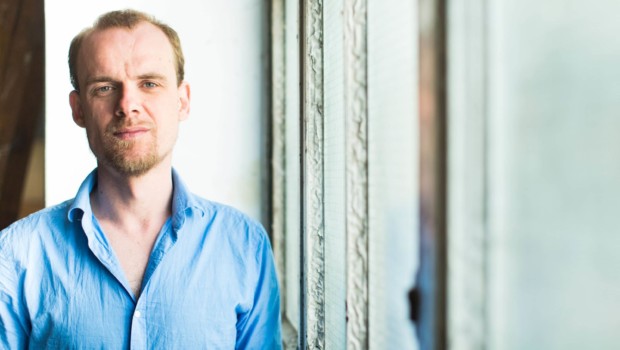 The idea for the opening play of the MUSIKTHEATERTAGE WIEN 2019 was born during a meeting for a new musical play. The idea of a kind of sound installation in the WUK, which would take up the theme of civilisation, was given space. And then details crystallised more and more, for example darkness during the performance. So the singers couldn’t read notes and couldn’t see each other. Sylvia Wendrock spoke with PETER JAKOBER about the combination of technical precession with human inaccuracy, emancipation and acoustmatics.

“the whole thing then begins to wobble acoustically…”

How does your piece “Sound Cloud I.” approach the two terms myth and civilisation?

Peter Jakober: I’m currently searching for lyrics on the topic, but even more effective in this vocal piece is the mass of people who are involved: A large part of the courtyard is sounded, about 50 singers sing in duos from the windows of WUK. So I work with the effect of such a mass of people on the one hand and with tempo polyphony on the other. A few years ago there was already a piece of mine with three choirs and twelve co-conductors. All singers are wired and carry an MP3 player, which are switch on at one point to play pitches, tempo and so forth. This wiring, this technical exactness and at the same time the human inaccuracy, the inactivity have been essential points in my music for a long time as well as an interest the term civilisation.

The tempo shift creates a very dense atmosphere, which invites the listeners to self-reflect.

Peter Jakober: The absence of a basic beat creates a detachment from or with itself, but that would also be the case with instrumental pieces. As my teacher [Georg Friedrich, note] Haas, the microtonal expert, described so beautifully in his essay: “Why does the C major scale sound so full? Because it’s so beautifully out of tune with the overtone series.” And for me it is in another direction, the polytempic approach, is also about this point: You try to be exact, but the transient oscillation of instruments, for example, creates an inaccuracy. The goal towards perfection, that is mechanical versus human thinking, and the repeated fails because of it, defines its power as a result. In “Sound Cloud I.” this fundamental aspect takes on a special quality once again because the voice is intrinsically linked with the body.

What will happen musically in “Sound Cloud I.”?

Peter Jakober: There’s a big grey area this time. I can simulate anything, you’ll hear fifty tempis stacked on top of each other, creating a huge sound cloud. Additionally, MP3 players have different playback speeds, even identical brands, and this alone results in an incremental phase shift. From a sound point of view, this will be a huge pleasure for me to hear fifty people partly speaking, partly singing: syllabic, in tempo and phase-shifted. I think a strong contrast will be experienced.

“an emancipation of man is perceptible.”

Do you bring humanity into the sound by highlighting the unachievable quality of perfection to which we are supposedly attached?

Peter Jakober: Yes. The human presence is always there when a person plays a sound. I am reminded and very impressed by [Joep van; note] Lieshout, when it comes to the pictorial in the work: the person who sings and creates this sound is hanging on cables on both sides. An emancipation of man is perceptible. This is also the case with Lieshout: his walk-in sculptures put the human being more in the centre again, even if there is something threatening about them. There are sculptures in which the human being acts without one seeing the human being in them, one only thinks of it. Everyone does “work” there, becoming part of a machine. Hoses or cables often lead away from positions where the possible human acts.

What roles do the principles of cluster and microtonality play in your works?

Peter Jakober: There is this well-known text by Stockhausen, “Wie die Zeit vergeht” [How time passes], in which he connects tone durations with pitches. An octave of 2:1 in tempo is quarternote 120 to quarternote 60, so an initial pulsation is quickly played back as a pitch. I also tried this with these tempo overlays by superimposing chromatic tempo steps with the factor of the twelfth root of two. The result sounded extremely bland, although Stockhausen’s text is great. I much prefer to use prime numbers as the basic ratio for the tempo overlays. So they have nothing to do with chromatic or microtonal relationships. There are no formulas for the generation of prime numbers, that creates a mathematical inaccuracy. I only refer to microtonality in the pitch constellation. Beating, which is caused by microtonal intervals, also produces pulsations. It is actually always there for me. One speaks of it as soon as one makes less than one half step, which simply fascinates me in terms of sound. But I do ask myself: What does the instrument have, what are its advantages, what can I do with it?

What attracts you to write for such special instrument constellations?

Peter Jakober: It’s mainly commissions that do that. My first commissioned work was for a guitar quartet for the musikprotokoll, which was very suitable for my tempo stories, because guitars have very short attack times and then end quickly. I often get inquiries because the contemporary repertoire for harpsichord and zither, for example, is very poor. With the piece for harpsichord [“dringen”, note] it is almost parodistic that it partly stands not only for one but for 40 harpsichords. I also ask: What does the instrument have, what are its advantages, what can I do with it? Also the harpsichord has this short attack … In the harpsichord piece, for example, a chord is always played very quickly with or against a recording of the same chord at a different tempo, which is very difficult. The whole thing then begins to wobble acoustically, which sounds not only pretty great to me but also funny.

Your opera “Populus” won the Johann-Joseph-Fux-Opernkompositionswettbewerb [a competition] and will be performed at the musikprotokoll in Graz in 2020. What do you want to say “to the people”?

Peter Jakober: I wanted to work on the subject of populism, but not in a finger-pointing manner, that doesn’t make sense anyway. Everyone who comes to this opera probably doesn’t belong to this clientele anyway, who obviously chooses populist parties. And that’s exactly why the opera should not be comprehensible, which is not so easy and has caused me to delay quite a bit. There is no peep-box stage, but the audience can walk all around. The texts are spoken by Ferdinand Schmatz, whose texts partly refer to political party programmes. It should never be possible to grasp what is actually going on. A circus with populism, and with the theme of people. Due to its openness, the listener is automatically a part of the piece, where everyone is involved in the performance.

Which principles of sound or composition were useful to you?

Peter Jakober: Recently I have become very interested in acousmatics; sound generators and sound are not perceived simultaneously here. As a Hitchcock fan, I know, for example, from the mother in “Psycho”, who you never see, only ever hear, that cause and effect are separated from each other. This creates a kind of alienation. In keeping with the theme of populism, one no longer knows the cause, but one still feels an effect. There is also darkness in my work, in which you can no longer tell the difference between live feed and live play. And the phenomenon of learning by imitation, through which children develop and acquire behaviours, targets the subject of populism: Politicians only have to repeat their sentences often enough or be repeated often enough by others, that is by the masses, in order to find their way into our heads, and one really has to work with all one’s mind to prevent these mechanisms from happening to oneself.