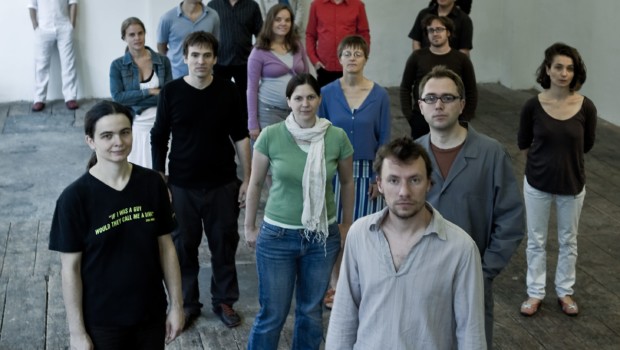 Daniel Riegler is one of the founders of the Jazz Workshop in Vienna, from which many fantastic and notable projects and bands have been born. The 20 piece ensemble “Studio Dan” (named after the 1978 Frank Zappa release) was formed in 2005 with the intention to bring something new and even “bigger” to life, and so Riegler began to organize a band of musicians around him to suite the project. The interplay between musicians was an important and deciding factor in the overall decision making process, since Riegler was interested in having an intimate interplay between the musicians, and not just another ground of seasoned, and estranged, professionals. The band spends countless hours practicing, traveling and playing concerts and Rigeler was dedicate to not following the practice of most big bands. In his own words, “It isn’t enough to just call someone and ask if they can jump in and play for the night….normally big bands fill the instrument slot with whoever can play that night, and I wanted to get away from that tradition, even if it isn’t always possible to prevent it.”

Riegler had the idea for the formation of a big band in the back of his mind for years, although originally he thought it would be a kind of free orchestra, a la Frank Zappa, with a large horn section, string quartet, percussion ensemble and rhythm group. While forming the band, Riegler began to question the viability of free-formed big band, and began to concentrate more on composition-based formation and soundscapes. From there a musical language began to evolve, and piece by piece a specific aesthetic began to emerge in the sound of the compositions; in part very stringent compositions, with a battery of pieces played back to back, sometimes with patchwork-like cuts, leading into pure sound excursions, chamber music interludes, swinging Jazz parts, and even into nuanced electronic sound collages. The compositions take on a collage-like structure, where the many parts of differing substance, combine to make a homogenous whole. It is important to mention, that although the ensemble resembles in its formation a classical big band, it was never Riegler’s intention to orient himself to that tradition. He elaborates, “Actually I never wanted to form a big band. It is really only the size which connects this band with a classical big band. I never had the sound of a big band in mind, or any ambition towards a big band ensemble. I played in several big bands through my academic years, but in reality, it never really interested me very much.”

The band continues to develop, challenge and create new music which defies any categorization, and they spread their sound through a variety of concert settings, workshops, composition contests, children’s concerts, and experimentation with new concepts of presentation over the internet and in real life. One pioneering project was the formation of a five concert series in which a variety of the different facets and projects of the collective were presented in Porgy & Bess (Vienna) and in the “Theater an Ortweisnplatz” in Graz. Similiraly the band was “Ensemble in Residence” during 2008 in Progy & Bess in Vienna, where the breadth of diversity was showcased in a monthly concert series.

Since their founding in 2005 the band has released three albums: “Creatures & Other Stuff“(2009), “Things feat. Nika Zach“(2010) and “Dekadenz – Music of the First Microtonal Society of Brigittenau“ (2012). In addition they have also presented a variety of different projects in a live context such as “Tribute to Frank Zapa“, “Studio Dan Chamber Music“, “Studio Dan & Elliot Sharp – In the Pelagic Zone”, “From Outer Space – Studio Dan plays the Music of Bau, Doundakoff, Skoglund“, “Studio Dan & Michel Doneda Fanfare III“.  For their first album, „Creatures & Other Stuff“, Studio Dan received a prize from the organization of German record critics.

It remains to say that we hope the amazing amount of energy and work that Studio Dan has garnered and put forth over the years, as well as their intrepid and fearless charge into new musical territory, both in the genres classical and jazz, will meet with an every-growing media presence, and public appreciation—They have more than earned it.