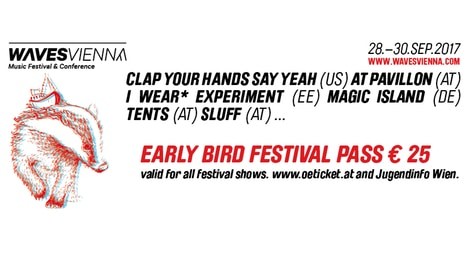 2017 will be the 7th round of the annual Waves Vienna Music Festival and Conference. From the 28th -30th of September, this multicultural initiative will be transforming established venues and exclusive off-locations around the headquarters in WUK into a concert and performance roundabout.

Waves Vienna is a festival of exploration. In the course of its existence it has brought musicians from across the planet to Vienna. It has also taken “East Meets West” as a working motto and created a strong platform where Eastern and Western music scenes can come together. And as in the past, Waves Vienna consists of two programs: a live part, in which musicians can present their works to a large and varied audience and the Waves Vienna Music Conference. The first artists announced for 2017 are: At Pavillon (AT) – Clap Your Hands Say Yeah (US) – I Wear* Experiment (EE) – Magic Island (DE) – Sluff (AT) – TENTS (AT)

This year, Waves Vienna will welcome two neighbouring countries as special guests. Italy to the South and the Czech Republic to the North of Austria. There will be a focus on acts from these countries in the live programme and the Waves Vienna Music Conference will also devote a part of its programme to the respective music markets and scenes of these countries.

Italy, like Austria, is a country with a great classical music tradtion. Aside from the many popstars that have already been  present in our radio and festival scene for decades, there is also a range of exciting new acts which are are beginning to attract international attention. Music still plays an important role in Italy’s everyday life. This is illustrated by the strong market for Italian music productions as well as the many, well visited, music festivals. This focus provides an opportunity for new cooperations with a many of those festivals. It is also the chance to develop new friendships with the Italian music scene.

The second host country is located to the north, the Czech Republic. The Czech Republic is well known for it’s fantastic festival scene.  Austria already enjoys a long-standing partnership with festivals like the Colors of Ostrava, Rock for People Festival or the Nouvelle Prague Festival. Now this cooperation can be advanced and extended as part of the focus. Although the Czech Republic is probably best known by music lovers as a nation of classical composers, it also is home to a diverse musical landscape. One whose most exciting talents will be represented live at this years Waves Festival.

Do you make music and always wanted to play at Austrias first and only showcase festival? Well, now is your chance! Just apply through gigmit and with a little luck (and talent) your act will be one of the ten open slots at Waves Vienna 2017.