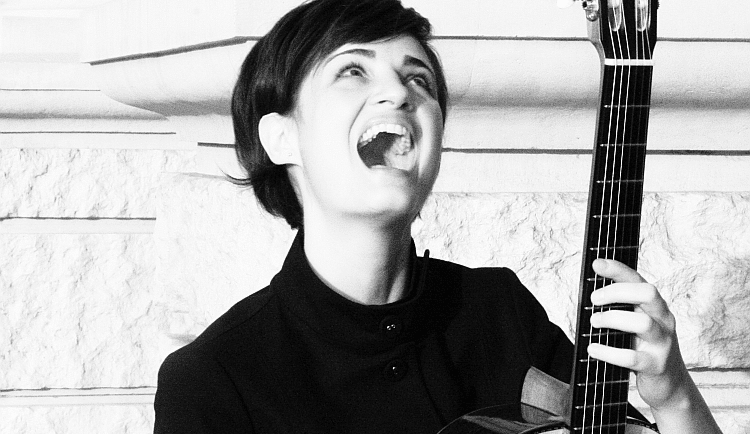 Music that lets you discover mysterious places through the most beautiful sounds. That is exactly what ZSÓFIA BOROS has created on her second album „Local Objects“ (ECM New Series).

It was already clear from her debut album “En otra parte” (2013) that Zsófia Boros is a true master of the acoustic guitar. The delicate, sophisticated, and powerful way in which the Hungarian born and Vienna based musician breathed life in to her melodies turning them into eventful, illustrative and incredibly atmospheric sound stories, was proof of an immense talent.

It’s no different on her current album “Local Objects”. Zsófia Boros once again follows fascinating paths that lead anywhere other than musical mediocrity.

THE ARTISTIC BRIDGE FROM CLASSICAL TO CONTEMPORARY

On “Local Objects”, even more so than on her critically acclaimed debut album, the award winning musician once again opens herself to very diverse styles and musical traditions. Zsófia Boros draws from classical as well as contemporary, creating incredibly broad connections ranging from Brazilian, Argentinian, Italien and Oriental music to jazz.

But it isn’t just the musical variety that stands out. The true musical beauty of the pieces lies in the sensitive and incredibly emotional performance of the Hungarian born musician.

The 36 year old performer transforms compositions – including some from the pens of Egberto Gismonti, Franghiz Ali-Zadeh, Mathias Duplessy, Carlo Domeniconi, Jorge Cardoso and Alex Pinter – into captivating experiences that get under the listeners skin. The subtly calm but haunting and incredibly lyrical way that Zsófia Boros approaches the works takes the listener to mysterious and far away places. Her multilayered interpretation takes us through endless soundscapes, intense states of mind, and deepest emotions. We celebrate and mourn, let ourselves be swept away and overcome by a powerful sense of melancholy.

“Local Objects” is an album that stands out. It is almost impossible not to be moved by the beauty of the melodies. Zsófia Boros’ music finds its way into the hearts of the listeners, deeper and deeper with every note she plays.