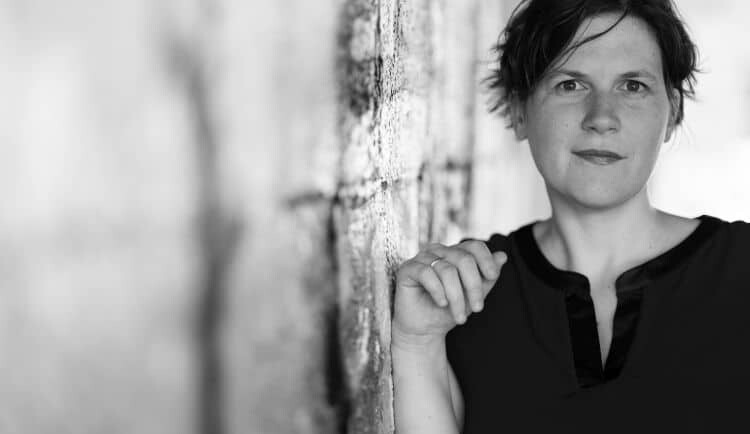 STUDIO DAN, ENSEMBLE LUX and ENSEMBLE RECONSIL have become the “beautiful past” of the composer and violist JULIA PURGINA. Teaching as a professor at the MUSIK UND KUNST PRIVATUNIVERSITÄT DER STADT WIEN (MUK) is at the centre of her musical life, along with composing commissioned works. As part of WIEN MODERN, her new orchestral piece “Akatalepsia” was performed at the end of October. Michael Franz Woels met her and asked her questions about her life as a composer.

In an audio mini-portrait by Wolfgang Seierl it was mentioned that you greatly appreciate the sensual component of composing, manual notation.

Julia Purgina: That has changed in the meantime because I now have to produce so much sheet music that it is easier to do it with a computer. Two years ago I finally forced myself to learn the notation program “Sibelius” in an intensive action. I still make notes or rough structures with my hand on my desk, but no longer the composition of complete pieces. It is simply more difficult to produce material for orchestra and large ensemble works by hand; it is still possible with chamber music or solo pieces.

Your list of works is very diverse; it consists of orchestral and ensemble works, solo concertos and choral pieces. The last mica portrait from 2013 mentioned that you love to compose miniatures. What are your current compositional preferences?

Julia Purgina: From a certain point on miniatures didn’t interest me so much anymore, because I wanted to give more space to certain ideas. Like last year, when I wrote the commissioned cycle “Vortex Peccatorum – The Seven Deadly Sins in the Times of Alternative Facts” for the Helsingborg Symphony Orchestra. The complete work consisted of seven miniatures – one for each of the mortal sins – but the overall planning of the construction was not based on the respective miniature, but rather on the larger form of an approximately 20-minute work consisting of interconnected sections. Next year in autumn my first opera will be performed and I will then compose an hour of music for the sirene Operntheater. The libretto will be written by Jérôme Junod.

What is the relationship between interpretation and composition? Composing must take a lot of time …

Julia Purgina: Both take time, playing and composing. They just need it differently. Playing needs to be more regular, which means that I have make sure that I stick to it. When it comes to composing, it’s rather the case that I like to dive in intensively. That means composing for three or four days when it’s somehow possible. That’s not so easy, because I also have a professorship at the Private University of Music and Arts in Vienna and my work as a course director for stringed instruments is a very demanding area, which I enjoy doing very much. Currently my focus is on teaching and composing. Unfortunately, playing has slipped into third place, but I enjoy it very much when I can take the time to do so.

Julia Purgina: When I have an assignment, I don’t care whether I have a specification or not. When I have requirements, it is exciting to first find an approach to the them and thereby broaden my own horizon.
The theme of VIENNA MODERN this year is “Security”. The artistic director Bernhard Günther gave me a quote from Nikolaus Harnoncourt: “The more beautiful something is, the riskier it is. Right next to the highest possible beauty is the abyss – and the crash. That is where we must go, we mustn’t muddle around in the safety zone.” I started to think about what security means and initially had a lot of political associations with various security issues that are present in the media. But I didn’t want to go into daily politics, at least they didn’t awaken any musical ideas in me. Then I went into the aspect of the quotation, in which the abyss plays a role. Where does security begin to crumble? Then I had the feeling that I could build a piece with it: thinking about where safety ends. Do I have a personal answer to that? I am a person who doubts a lot. And doubt is always the moment when security ends. I find that doubt and insecurity are something very elementary.

Has “Akatalepsia” become a biographical piece?

Julia Purgina: Since I didn’t want to write a biographical piece, I was interested in how different philosophies deal with the subject of doubt and, naturally, came across the skeptics. “Akatalepsia” is precisely the impossibility of understanding the essence of things. However, not in the sense that one doubts everything, but that it is also a kind of impulse to continue researching. There is the idea that the essence of things cannot be grasped, but can be experienced through the senses. Senses are incredibly stimulated with music. I thought about how I could capture this idea of not being able to understand something in music. Creative thinking is not one-dimensional and linear, that’s why you can’t tell exactly what a piece is about.

“WHICH LED ME TO GREEK MYTHOLOGY […]”

In medicine, acatalepsia is the uncertainty of a diagnosis …

Julia Purgina: Yes, this is a state in which you can develop massive doubts about life. You notice that something is wrong, but you can’t name it exactly. As soon as you have the diagnosis, you have a certain certainty again. These two aspects, the ancient skepticism and the medical meaning, have triggered chains of thoughts that are now in the piece. The opposite of acatalepsia is catalepsia. Catalepsy is the rigid adherence to something. There is also the cataleptic bridge in show hypnosis, when the body becomes stiff like a board. I then wanted to continue this idea of hypnosis and also these massive doubts that one has with an uncertain diagnosis. That led me to Greek mythology, to the god of sleep, to the goddess of the night, to the gods of death. Nyx is the goddess of the night and her children are Moros, Thanatos and Hypnos. I have tried to capture her mythological family history and create different images of it. It has actually become a very dark, gloomy piece.

How did you develop the instrumentation for the piece “Akatalepsia”?

Julia Purgina: For this work I had a large symphony orchestra to work with. I deliberately reduced the violins. There are now only four violins in the whole piece which are conceived as distance violins and only appear at the end of the piece. At the bottom of the stage is a large symphony orchestra, in which the violas take over the function of the violins as the highest string group. So I did without a large body of sound for the violins, but for the wind instruments, for example, I kept the full number. I wanted to try something that lured me away from the safe path.

“IT’S LIKE A BLACK WING IS SPREADING OVER THE WHOLE.”

Is this special reduction and positioning of the violins in your piece “Akatalepsia” also an attempt to unsettle the musicians?

Julia Purgina: Of course. We all know what role a concert master plays. That is the position where everything comes together. This is incredibly important, especially for the coordination of the string section. And the others in the orchestra also orient themselves very strongly towards the the first violin. What happens if that’s not there and the violins are positioned outside the orchestra’s field of vision? And although nothing foreign to the orchestra has been added – which always creates a challenge – this removal is also a huge change for the musicians. And these distant violins also have another function in my piece. Gustav Mahler has long-distance instruments such as trumpets. I always say that this is the kitsch he can afford – or the cowbells he uses. And for me these four violins are the kitsch I afford myself because they have the function of angels of death. I had this idea when I was composing: It is as if a black wing were to spread over the whole. At the end of the piece, they sound from afar with sighing motifs in a very minimalistic way “from on high”, thus accompanying its death.

“OF COURSE, IT’S NOT USUAL FOR A WOMAN TO COMPOSE.”

Finally, a very personal question: What is it like to work in an area that is strongly dominated by men?

Julia Purgina: Of course it is not usual for a woman to compose. I mainly had male colleagues in my studies. During my studies I didn’t have the feeling that my gender played a role. The university is a protected world with open, reflective people. That changes a bit when you leave this protected space. It is possible to make a career as a woman, but difficult: I personally can live from playing the viola and composing and have a professorship. However, it is still the case that people who don’t know me and to whom I tell that I am a composer, for example, simply immediately assume that I only compose as a hobby. I believe that women are not perceived by the outside world as composers with the same self-image as male composers. For comparison: when my husband Roland Freisitzer says this, it is accepted and perhaps the question is asked whether one can make a living from it. But there is no doubt that he composes professionally. And there are simply still many areas that remain closed to women out of a certain ignorance.

For example, if you look at the Munich concert series for New Music, musica viva, this season’s programme does not include a single female composer. 2018/19 – not a single female composer! And I can understand women who get bitter in this situation when doors are simply closed to you. That’s up to the artistic directors, people who are in positions to make decisions. They simply don’t bother to find an interesting female composer. The standard sentence is often: “But we already had a woman last season anyway”. Interestingly enough, it doesn’t bother men if you program them every year. But there are many great female composers across all generations! Especially since 1950 it is really easy to find them. Even before that, there were more interesting ones than you might think. Last year the Helsingborg Symphony Orchestra tried to program older music by women all year round. There was the “2nd Symphony” by Louise Farrenc, a great work, but never played – Brahms or Schumann, however, always. Basically, this art business lives from many egos and if you’re not someone who’s socialised and urged from an early age to push yourself to the forefront, but rather more reserved and introverted, you have a disadvantage. And in many cases this applies to the socialisation of women. Just don’t be demanding or rebellious in order not to be unfeminine. There’s a lot going on, of course, but unfortunately it is still not irrelevant which gender you have.

Thank you very much for the interview!
Michael Franz Woels – translated by Dave Dempsey