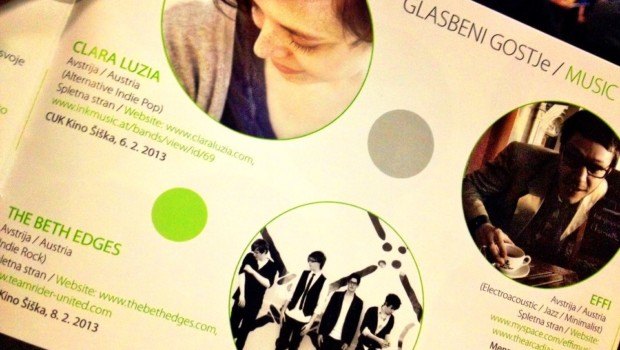 Coming back from the Slovenian Music Week (STG) in its 2nd year, the festival once again managed to gather a variety of interesting guests from the European music industry. Born last year with the concept of promoting the Slovenian music scene, the festival serves as a new international music platform to bring Slovenian and foreign music business protagonists together. Taking place from the 5th -8th of February, this year’s Slovenian Music Week served up a number of interesting seminars, panels, discussions during the day and live shows in the evenings.

An important theme of the festival was the Austrian-Slovenian connection. As part of the Slovenian Music Week, the Austrian Music Export hosted a successful networking and showcase event with Austrian bands, panels, matchmaking sessions and a relaxed meet and greet with Slovenian and international industry representatives, media partners and artists on the 8th of February, 2013.

After an introduction on the Austrian music market with the speakers Tatjana Domany (Austrian Music Export/OMF), Thomas Heher (Waves Vienna) and Franz Hergovich (Austrian Music Export/mica – music austria), the organized networking session and reception offered the opportunity for festival participants to get to know each other and exchange key contacts for possible future cooperations.

First results of the STG are also worth noting: five out of six of this year’s STG festival partners have chosen Slovenian acts for their festivals. EXIT (Novi Sad) and Waves Vienna will both promote Kill Kenny, Hungarian Sziget Festival the groups Bro and Barely Modern. Taksirat Festival (Skopje) booked the band Napravi Mi Dete, Croatian Terraneo chose Icarus Down, while the Austrian Springfestival is still deciding on which group to pick and will announce their decision at a later stage.

In general, the attendance of music market representatives at this year’s STG was more pronounced than the first edition. It just proves once again that it is important to open up the space for more intense networking and to foster the East and West connection in Europe for stronger relationships, better exchange and business opportunities and to firmly establish our collective position in Central Europe on the international music map.