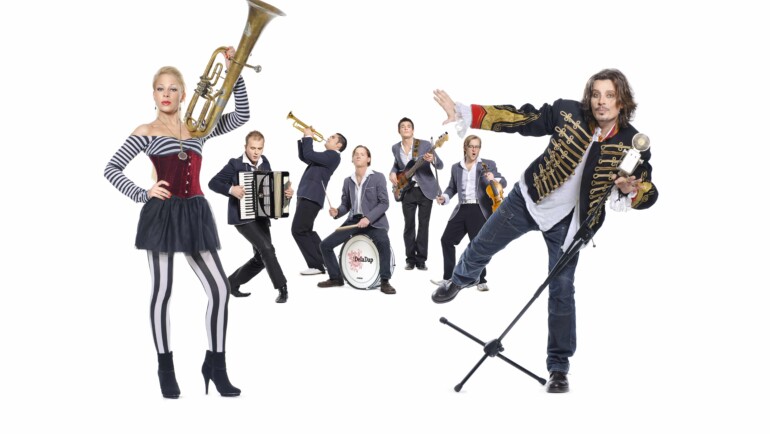 The formation !DELADAP, shuffling around the Vienna-based Czech musician, DJ and producer Stani Vana are no strangers to the world’s stages. With their extremely refreshing, colorful and high-energy mix of sounds from many different styles and genres, the international combo has established itself as one of the most important and innovative bands of the local world music scene. With the recently released fourth album “I Know What You Want” (Nouveau Chapeau), Stani Vana and his colleagues once more deliver a fascinating and immensely rousing musical firework.

When it come to realizing his own musical visions, Stani Vana knows no limits. The way the  native Czech musician, DJ and producer wanders between sound traditions, between new and old forms of play, between East and West, between different genres is great art. The mastermind himself defines the music of his band, with Melinda Stojka (vocals), Marko Markovic (trumpet), Georgiji Makazaria (voice), Hidan Mamudov (clarinet), Aliosha Biz (violin), Maxwell Right (beat box) and Panko Gabas (turntables), as “urban gypsy sound”.

This description could not be more fitting. Balkanesque and Eastern European sounds are combined in a wonderful and compelling manner with elements of traditional Roma music and urban club and electronic sounds. A mixture that is almost a musical bridge from Stani Vana’s childhood to his present life. Together with his colleagues the mastermind creates thrilling, high energy and extremely danceable tracks that could easily pass as today’s modern soundtrack of Vienna, with its vibrant cultural diversity.

!DelaDap’s music is full of life and power. With every sounding beat, you can almost feel the irrepressible joy Stani Vana and his combo have when they play their music. To crown it all, the music is infused with a whole lot of soul by the expressive and multifaceted voice of singer Melinda Stojka. The songs spread so much zest for life and appeal equally to the soul and the dance floor.

With !DelaDap’s music, Stani Vana and colleagues impressively underline that they understand how to interpret the term dance music in a striking way across genres and on an international level. Needless to say that they are well recognized for their hard work and fine art at home and abroad. Currently !DelaDap has been nominated for the Amadeus Austrian Music Awards in the category ‘Pop/Rock’. The award ceremony will take place on the 1st of May 2012 at the Viennese Volkstheater and will be broadcasted live both on TV and online. Up next they will be playing a few gigs in various venues in Austria and will hit the stage on the 10th of May at the World Music Festival in Kassel, Germany.
Michael Ternai
(translated from German)