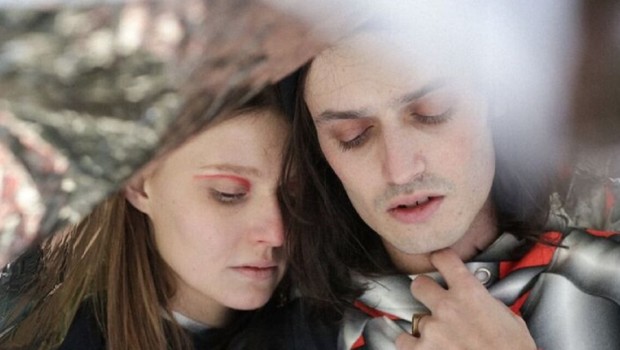 The FM4 Soundpark is a web-platform, community, and radio show for Austrian musicians. Every month, one act is selected to be highlighted both online and on air: The FM4 Soundpark act of the month.

LET ME TELL YOU ABOUT LOVE

Anger are a band and a couple. It works. They are the FM4 Soundpark act in January.

Emo-Boy meets cool skater girl. They don’t like each other, of course. Eventually they become friends, then a couple. And then a band. Anger are Julian Angerer and Nora Pider from Brixen, South Tyrol. They recently moved to Vienna and brought a beautifully melancholy mood accented with a soft Italian flair with them down from the mountains.

Although Anger is relatively new, they already have a stage history together. Performative in VonPiderZuHeiss, and also as a band with The Artificial Harbour. The joint project Anger is only a year old. Nora Pider decided to learn a new instrument, the bass. Now she loves it. Contrary to their previous joint projects, no particular person is at the centre of attention. Not only do they share the energy on stage, but they also share the vocals. The resulting voice develops a discreetly beautiful androgyny. A front duo that doesn’t simply reverse the gender roles, but distorts them completely so that everything can come together as a whole.

“In fact, we work like yin and yang,” Nora says in an interview. It’s obvious on the recordings, but even more so on stage. The performative element, which Nora Pider still pursues alongside Anger, is almost as powerful as the music. There is no space between the audience and the stage – although Julian Angerer, smiling, says he would like to play a huge stage. But not out of hubris: “Our voices are actually less sung than whispered. It’s very quiet, and it’s best to position the drums far, far, away from the vocal microphones.”

LET ME TELL YOU THE TRUTH

They are breathy Dreampop love songs that distil the essence of their relationship. Songs that aren’t locked in cryptic language, but deal openly and self-reflexively with themselves.

Anger‘s commitment to openness isn’t only demonstrated in the musical portrayal of their intimacy, but also in the visual. The video for the single “Without You” was shot in Nora Pider’s mother’s bedroom. A last minute solution since the desired hotel room wasn’t available. But it is also somehow a perfect setting for the 80’s influences, the heavy guitars, the daydreams. There is only the camera and the two of them and their very intimate view of things. Each cut the scenes of their lover in afterwards, in order to more precisely define their view – and love – of the other. Questions easily arise like: Can we really find each other?

IT’S ABOUT LOVE, AND SO MUCH MORE

“Without You” was Anger’s first single. It was followed by another love song,”Another Love”.

But it is not that Julian Angerer and Nora Pider want to rub our noses in their happy relationship. Their openness is appreciated, it makes them more vulnerable.
There is also a video for “Another Love“, this time recorded together with the filmmaker Ivan Poletti. The scenery is a completely different one,  as is the song: A surging funk bass comes in and vaporizes the typically breathy voice to an occasional squeal. It doesn’t always have to be straight, not even the relationship that, unlike in the bedroom, presents itself as an escape into individuality, we are not only one. A love song for yourself and your partner, for the music and for the feeling that spreads when it brings a smile to everyone else’s face.

Peter Paul Aufreiter, a well-known artist (Hearts Hearts, Eoae) and producer (Olympique, Safari) had an influence on both Anger singles released so far. He will also be supporting the debut EP, which will be released in March. In the meantime, Anger was able to secure additional professional support for themselves by signing with the Viennese label ink music.

So now we get to spend the cold winter months waiting for Anger‘s debut EP. It will be titled “Liebe und Wut“. I don’t know if I’ve ever heard a nicer title.

by Lisa Schneider (translated from the German article by David Dempsey)