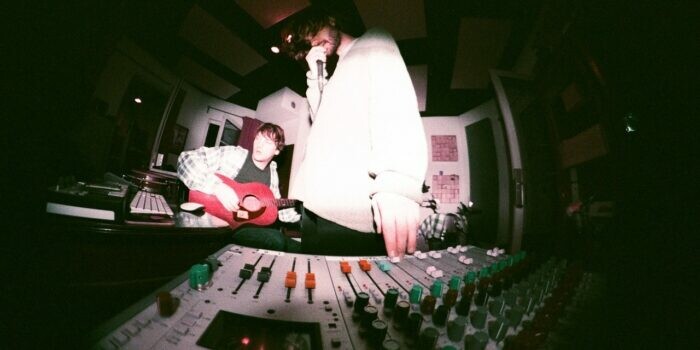 The FM4 Soundpark is a web-platform, community, and radio show for Austrian musicians. Every month, one act is selected to be highlighted both online and on air: The FM4 Soundpark Act of the Month. This month the honor goes to LUEK & Marco.

With this voice sample from a US-American TV show Lukas Maletzky and Marco Kleebauer start their album. The laughter of the sitcom heard in the background is already an indication of what will follow. After the sampled excerpts over funky krautrock beat and grumbling bass guitar tell us about advertising and life, suddenly, screamed vocals, heavily distorted guitars and bass and trashy drums blow us away.

What LUEK & Marco Kleebauer, the two Austrian musicians and producers, have created with “Yada Yada Yada” is nothing less than a wacky, delightfully unleashed, somewhat crazy and, at the same time, brilliant piece of indie pop rock. And it came like this.

With “Rimgo-Starr” for a cup of coffee

They have known each other for over 10 years. Marco Kleebauer, who plays with Leyya and Sharktank and has produced for bands like Bilderbuch and Oehl, has already written a few pieces with Lukas Maletzky, singer and guitarist of Naked Cameo, for the project Daffodils. With that collaboration, however, they have not really been able to express their inner craziness and musical spontaneity.

Now the time was right to do a bigger project of their own. Originally, the two wanted to meet for a coffee in Marco’s studio. But everything turned out differently when Lukas grabbed his guitar and the two of them just got started. Within nine days, twelve songs were created. Like in a frenzy. This music works according to its own rules.

Marco Kleebauer: “I have always believed that I have to ‘fix’ my music. But mistakes are allowed. You can even embrace them. They turn the music into something special. The roughness that comes out of them supports the music. For example, for one song, we put the microphone in the aisle and played the s drums. And that was then the sound.”

Lukas Maletzky: “At the end of the day, it’s music and it’s always an organic thing. My inner nerd comes out in these cases because I love records where you can hear mistakes. With old recordings, where not everything could be cut cleanly with tape machines, you can hear it when Ringo from the Beatles hits the edge of the snare drum. And today you talk about it – Hey, do you know the recording where Ringo hits the rim?”

Marco Kleebauer: “That’s why they call him Rimgo-Starr.” (both laugh)

Speaking of bugs and tape machines: For the production of the album, Marco Kleebauer got himself a very old, “a bit broken” tape machine from the 70s. He then dubbed the recordings onto the old tapes that came with it. The classical music originally on the tapes could not be dubbed over 100%. And so you can still hear – if you have a very fine ear – a bit of Bach music in the very low frequency ranges. Maybe that’s why the songs find a lot of appeal, as Lukas notes with a laugh.

Musical intuition, socialization and a lot of laughter

Songs like “EU Breakfast” make many of the influences audible that Marco Kleebauer and Lukas Maletzky have collected throughout the course of their lives. For their project LUEK & Marco Kleebauer, they let their musical socialization flow into the songs with playful intuition. There is good old grunge to be heard as well as influences from early Beck, but also harder sounds. With the wildly stumbling noise thunderstorm of “Birdsong”, one can almost draw parallels to the experimental rock project Fantomas by Mike Patton. Especially when the sparrows are shouting from the rooftops.

Lukas Maletzky: “With this song we tried to write the most generic rock lyrics possible. We succeeded quite well with sentences like ‘It was a beautiful day outside – and I put on my shoes…'” (both laugh)

Marco Kleebauer: “And just by the title ‘Birdsong’ you have a picture in your head how it will sound. Then Lukas sings about how the birds have the blues and they just don’t whistle, they scream from the trees…”

This is the song that made Marco Kleebauer and Lukas Maletzky laugh the most. Marco adds that he has never laughed so much in his life as during the nine days of songwriting. You can hear this fun, this casual writing, and the joy of playing and experimenting in every song.

Even when it is a slower piece, like “Biznes with you”. A psychedelic, wonderfully swinging ballad, in which – as in many of the songs – the vocals of Marco and Lukas alternate. The lyrics were created in the same room, but often “independently” of each other. You can hear this quite well in “Biznes with you”, when Marco sings about the fact that there is not much left of the relationship and Lukas raves about being freshly in love, which can sometimes express itself through crazy cat meowing. There we are again with the laughter that bursts out of the two when imitating cats in front of the microphone.

The art of not taking oneself seriously

What sounds like pure fun and a session created in a flash should not tempt you to believe that there is no work behind all the songs. Maybe not work in the sense of weeks of songwriting, months of producing and perfecting. The work that the two musicians have done for this project has already happened in the many years before. Everything that the two have learned musically and technically up to that point is in every single note. Only this time they were able to use this experience quite unconsciously. No big planning, no thinking about which song sequence to do. Instead, it was decided from the gut what would fit and work in the flow of creation, which was then poured over the recordings.

Of course, Marco Kleebauer also knows exactly what it takes to make songs sound good and balanced despite the mangy sound. “I Have No Friends,” for example, is tightly woven yet very direct, with an “I sing to the distorted guitar line” Weezer twist and fun chorus that’s a bit reminiscent of Smashmouth. The song also conveys the lyrical tenor of the album. It is increasingly about ending relationships and who are the real friends and which ones remain even in difficult situations.

Another aspect of the album is “not growing up” but nonetheless not condemning yourself. In “I ate a lot of crap today”, Marco Kleebauer describes the phenomenon that we probably all know: You want to eat healthy and at the end of the day you’ve stuffed yourself with too much junk food. What’s more, with Marco Kleebauer’s diabetes, it’s not exactly a good idea to have days like this.

The conciliatory, but quite ambiguous number “It’s Okay” then also immediately provides the processing of such “lapses”. When Lukas and Marco sing in head voice “he’s got diabetes – ah but it’s okay”, it’s in a “make friends with the situation and still enjoy life”-sense. In the verse, however, Marco makes us realize that it’s all about our interpersonal relationships, how we and others deal with our shortcomings and illnesses.

There are many references in the 12 songs, many loving details, both lyrically and musically. At the same time, the album captivates with its immediacy. The raw energy and fun the two had making it are audible in every minute. Why it all worked so well is ultimately also the basic attitude of the two musicians: not to take themselves too seriously or importantly, so as to follow the inner spirit and to be able to be completely absorbed in the doing and in the moment. The title of the album “Yada Yada Yada” probably also refers to this, and this is exactly the kind of humor that makes their music so refreshing and great.