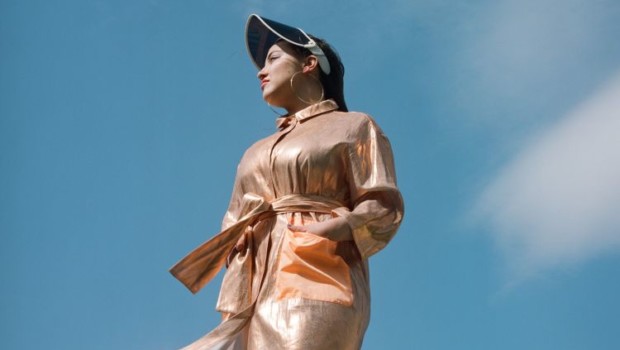 Maybe SOIA has always been like this. Maybe she really wants to know it this time. The label is new, the team is bigger. International media are picking up on her. On Spotify, “Run With Wolves” is featured on a playlist with half a million listeners. This is of course also due to the new album “Where Magnolia Grows” (Compost Records), where one can feel desire to take a few less detours. Stefan Niederwieser spoke with the artist.


Your third album, ”Where Magnolia Grows”, just came out. Did you celebrate that today?

Soia: I had an afternoon nap.

“WE WERE SPAT ON AND PERSECUTED, IT WAS BAD.”

Don’t you camp the live statistics from Spotify, YouTube and Media Markt?

Soia: For the first time, I left a lot of things behind. Kasun Jayatilaka helped me with this album, which was necessary and pleasant. I don’t drink alcohol, have stopped smoking, do yoga and go for a lot of walks. Today I will eat Dim Sum with my mother. For the first six years in lived in Taipei, then six years in the Nazi-Tullnerfeld (Tullnerfeld is a region in Lower Austria, translator’s note). Where we lived, all the children who didn’t speak German well were put into one class. I hung out with them, they were much nicer. We were spat on and persecuted, it was bad. We threw eggs at FPÖ posters. I hate it there. It’s like Mordor.

Every album feels different. How does this one feel?

Soia: More colourful, cheerful, and warmer. The first album was autumnal, “H.I.O.P.” kind of as well, this one is very summery, forward-looking. I like it. You need distance, every album comes with a lot of stress, with compromises. You have to be able to deal with criticism. I am very occupied with organization, I have to know everything about contracts, streaming platforms and booking. The year before last I did a music business course at the Umiversity of Applied Science Kufstein with Hannes Tschürtz, which helped me a lot. It’s not true that an artist just expresses themselves creatively and is one with the universe, it’s hard work.

Musicians often talk about an album like other people talk about a childbirth, it’s painful, afterwards the pain is repressed, joy prevails.

Soia: It is a trauma. You suffer from it, everyone tells you how beautiful it is, you think to yourself: “This brat that tortured me. I love you anyway …” We worked on the album for three years. Thanks to a grant from the Austrian Music Fund, we were lucky enough to be able to pay the people involved for at least a part their work. I am a big fan of mica – music austria because it provides a lawyer for contracts.

How much material didn’t make it on the album?

Soia: Little. Until a song is completely finished, we, my producer Mez [Daniele Zipin] and I, need a lot of steps. We played instruments, guitar, bass, brass… In winter two years ago we spent a week in a house in the Waldviertel. Two or three songs were written there, they were changed, re-composed, pitched, recorded, pitched again, re-recorded. That takes forever. Much of it was written in the summer of last year. I was in the studio almost every day after work.

There’s a recording of “Pancakes” at the Bohemia JazzFest. Which version comes first, the studio or the live version?

Soia: The studio version always comes first. We haven’t done a song as a band yet, Mez does a lot of prep work. We try to add other parts live, make transitions, there are solos, live we are almost classical jazzy. In the future there will probably be more backing tracks.

Is “Where Magnolia Grows” less jazzy?”

Soia: Yes, jazz exists in the harmonies, but it is more withdrawn. We wanted to be more accessible and straightforward. This is also reflected in the lyrics and the voice. I got a Parental Advisory sticker because some songs have “Fuck” or “Hoe” on them. In Utah I am forbidden [laughs]. That would still have to be researched.

Without getting Claas Relotius involved, who should check it?

Soia: I’m frustrated that some songs are not allowed to be played in some states. I use “Hoe for Love” in a feminist context. That’s how the Americans are. I said “fuck” live on air in an interview in Philadelphia and everyone flinched because they now had to pay a fine.

Let’s talk about the video for “Run With Wolves”, in which the artist Mirabella Paidamwoyo Dziruni also performs. Are you friends?

Soia: Now we are, she’s in a bubble of well-known artists and DJs like Tonica from On Fleek. I like collaborating with independent artists. And Mwoyo is simply very badass. In one of her projects she photographed herself naked in front of Viennese locations and asks questions like who has the right to decide who can go to the doctor, who is allowed to travel where, etc.

“I HAD TO SIGN THAT EVERYTHING WAS DONE IN AN ORDERLY FASHION.”

What was the part of the shoot at the Wiener Graben like?

Soia: People passed by us. We didn’t put the nipples in, there were plenty, nipples for everyone, but that’s not a headline [laughs]! An old couple went by in fur coats and asked if I was cold, but that was it. It was more problematic in PROSI, this exotic supermarket. I had to sign that everything was done in an orderly fashion. They once had a scandal because of ATV (television station in Austria) and didn’t want to be put in a bad light. The operator is a conservative South Indian family who is very nice. We had an aubergine in her hand during a recording, not too sexual, it was a short aubergine anyway. That I had to negotiate…

How did the relatively old “Fractal Spirits” make it onto the album?

Soia: It fit well with the rest of the songs. It was released in Japan on a special edition, a video is available, but now the song is on streaming platforms.

“Guarding” is almost classic R’n’B, which almost doesn’t fit to the image of the rest of the album.

Soia: That’s my favourite track, I think it’s beautiful. Maybe it’s the most old-fashioned, with a gospel feeling. Maybe “Pancakes” as well, that one is rather boom bap.

Why are there so few collaborations?

Soia: Right, there are almost no features. I’d love to have some, but I didn’t have the time. I’ll do that in the future for sure.

Eight years with the same producer is a very long time. Do you have any differences in opinion?

Soia: Everyone who works with others in a creative fashion knows that not everything is always happy. But I really appreciate Mez. He has a very high standard, he is not only a producer, but also a musician, you can see that. I like ninety percent of his material, just the eighties and Miami Vice influences not as much.

What would have to happen to have a photo of you on the album cover?

Soia: I would never do that. For me, albums are like diaries of a time period. The cover should be an interpretation of that. That’s why there are graphic or painted pictures.

“BUT FOR ME SPOTIFY IS A MYSTERY.”

How does the album get on big Spotify playlists? Have you done studio sessions, curated special compilations or playlists?

Soia: “Run With Wolves” is on a big playlist, Butter has 430,000 followers, the label helps. But for me Spotify is a mystery. I listen to my music on YouTube [laughs] or on my old iPod. I dig less than some of my friends. I’m not an influencer. I do Instagram, but I’m glad Kasun Jayatilaka took over some of it. Instagram is something that you have to do, personally I’m not the type for it. I recently had to create a private profile to post my own stuff.

“THIS SELF-PORTRAYAL IS PART OF IT, BUT TOO MUCH BECOMES UNPLEASANT FOR ME.”

But fans want these private insights and statements.

Soia: Yes, definitely. I try to post privately as little as possible. If I do, I support people or projects that I admire. This self-portrayal is part of it, but too much becomes unpleasant for me. I wouldn’t say or wear anything specifically. I am not a machine.

But now you’re wearing a T-shirt that says “Not My Government”.

The album is released on Compost Records for the first time. What can a label achieve nowadays?

Soia: Other contacts. My old label belongs to an extraordinarily nice guy, he does it really lovingly. At the same time he is a university professor and has a family. Compost can devote itself to this better. They’ve been doing this for a long time, I feel that I’m in good hands there.

How hard is it to get a JUICE video premiere?

Soia: I think they are buddies. Franjo Utsumi is the label head of Beat Art Department, which belongs to Compost. He just has contacts. DJ Friction, an old member of Freundeskreis, played my track. I love Freundeskreis, that’s almost the only German Hip-Hop I like.

Soia [looks aghast]: I respect all musicians. I have my opinions, but would never talk badly about anyone. It’s such a hard job to fight your way through, I really respect that. Even for Gabalier, not because of his content and his oafish brain, but because of his work.

What was SXSW good for? And how do you prepare for something like that?

Soia: You can’t really prepare for that. I’ve never seen such a circus before. This is the biggest trade-fair for the music business. It’s like being in a candy store and having diabetes. It was a lot of work beforehand, I was jetlagged, played my showcases and gave my best, but as a small artist I didn’t have the capacity to prepare sufficiently. There is a program where you can network. But if you’re not on the rise, you’ll get lost among the other 2,000 artists. I enjoyed it and watched a lot of concerts. Some take place in conference halls, that gets a bit absurd. There is no money for it. You have to rent the backline, it’s terrifying on entry because they have become stricter with work visas in Texas. But that´s what I wanted to do.

Are you going to play at the Popfest Wien for a third time?

Do you often sing in German?

Soia: Usually not. I think German is an ugly language, but Viennese kind of works. I have received funding through the SHIFT programme for a project called “G’schichtn aus’m Wiener”. This I´m doing with Fabian Bachleitner, the singer of Belle Fin. I wrote a song about my grandfather. I always wanted to do something social, I studied biotechnology, was naive and idealistic, but didn’t want to work for a pharmaceutical company. So I combine the social project with music. We go to nursing homes, portray ten people and talk to them. It is supposed to show a positive aspect of the Viennese identity. When I came to Austria, I hated my native country, it’s very personal to me. We will then make an album. Finally there will be a tour through Viennese nursing homes, where we will play free of charge for senior citizens. We will play a lot of cards and drink schnapps.