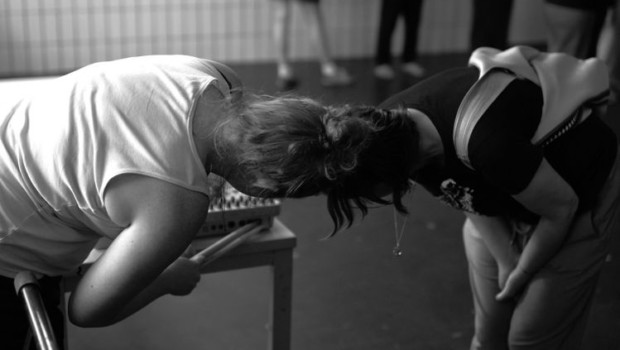 Viktoria Kirner (DIVES) on feminist networks and what they can achieve within the Austrian music scene.

“Three Girls Step on the Accelerator”, “Viennese Women’s Rock’n Roll” or “Women’s Power Straight Forward!” – these headlines which often also want to describe my band DIVES make it clear that it still exists, this gulf between men who make music and women who make “women’s music”. But that’s enough for now! For a long time women have been on stages apart from background dancing and -singing and they are becoming more and more. Girls Rock Camps and other feminist communities are working to keep it that way – without them my band wouldn’t exist today.

Come, as you are, Riot Girls!

“Be loud”, “Take your place”, “Stop apologizing!”, has been echoing through the corridors of a former slaughterhouse in Hollabrunn, Lower Austria, every year since 2011 as part of the Pink Noise Girls Rock Camp: Attempts to break stereotypical roles and to strengthen the self-confidence of young women, trans-, inter- and non-binary persons. Participants between the age of 15 and 21 have the opportunity to try out theirs skills in music for a week.

On the agenda there are topics like songwriting, sound engineering or producing, but also instrument crash courses and band rehearsals. The week is accompanied exclusively by women* who are musicians themselves or come from this area. Some of the most prominent workshop leaders of recent years have been Clara Luzia, Kerosin95 and Gustav. In 2015 the camp, organized by Pink Noise, an Association for the Promotion of Feminist Pop-Cultural Activities, was exceptionally held in Linz. There I got to know my band colleagues.

The idea of such a music camp is not new and not an Austrian one either. Tying in with the Riot-Grrrl-movement of the 90s, this concept originally comes from the USA. In 2001 the first Girls Rock Camp took place in Oregon, Portland. In the meantime there’s a worldwide network of camps, united under the umbrella of the Girls Rock Camp Alliance (GRCA), a movement that meets annually for global conferences. The European offshoot, GRCA-Europe, was recently initiated by founders of the Austrian association Pink Noise. The latest camps are currently being established in the Balkans. Since 2018 the EU co-financed youth program and exchange project “‘Erasmus+ Youth in Action” has also been taking place, which last year saw the participation of twelve European Girls Rock Camps.

Many of these camps which are happening across all continents, have different focuses, but they all pursue the same goal: empowerment, creating safe spaces and changing perspectives – from fan to musician. And all of this is as easily accessible as possible, following the motto “Come as you are” – even without any previous musical knowledge.

I can be your safe place

The latter is probably the only reason why my band DIVES exists. In 2015 I held a bass in my hands for the first time, at the place in Linz where I was supposed to meet my future band colleagues – inevitably, as the workshop “Lo-Fi and Electronic Music” was cancelled at short notice. I wasn’t able to play an instrument at that time and at 24 I was the oldest and therefore the most unruly participant of the Pink Noise Girls Rock Camp. I felt too old for impro-workshops, songwriting with 15-year-olds, and somehow, generally speaking, for making music. Who learns an instrument at 24? And being on a stage? No, thanks.

But at the end of this week you will find yourself there. With three songs of your own, which you wrote with the band that was founded only a few days before. You just do it. At the latest if you see with what kind of self-evidence even the youngest participants are taking the stage for themselves. On these final evenings, each year you can feel the power and the energy in the air. Many experience here for the first time what a safe space feels like. No matter whether band coaches, participants or organizers – the room is full of people who will catch you if you fall. It’s just that you don’t fall, because you are strong enough. You have been strong before, but now you know it too. And now you want more.

On evenings like these several bands that are well known in the Austrian music scene today were born: Aivery, La Sabotage or Schapka (Шапка ) met at the camp.

In Austria networking initiatives do exist also in other formats. Former participants and organizers of the Pink Noise Girls Rock Camp are inviting to the monthly socalled Noise Kränzchen [coffee circles] where women* of all ages can make music together in a rehearsal room in Vienna, also without any previous musical knowledge.

The initiative of the Grrrls Kulturverein [a cultural association] in Graz also aims to make female musicians and their bands visible and to increase the quota of female musicians. In addition to their event series “Grrrls Night Out” in which only bands whose members are predominantly female* are booked, the collective regularly invites to Grrrls-jam sessions and workshops.

And even beyond punk, rock or grunge, there are numerous feminist communities in Austria that support each other in the music scene: for example, in the feminist network female:pressure consisting of women* who are active in the fields of electronic music and computer art, or in the Viennese collective Sounds Queer which works at the interface between electronic music, sound art and queer activism, or in the form of the database femdex, which lists female* and non-binary DJs and producers.

So what can they achieve, these networks?

Participating in a feminist music camp gave me (apart from two band colleagues and a completely new perspective on life in an indie rock band) above all that self-confidence that I missed during my teenage years. And the feeling that I can achieve anything. Maybe not always on my own, but next to women whose strength and talent inspire me.

It is precisely this feeling of belonging to a strong community and an environment permanently shaped by female role models that many girls and young women see as the best foundation for breaking through power structures outside their own safe spaces and penetrating male-dominated areas in the future. What feminist networks clearly do not want to provide is the legitimation for promoters and bookers to establish girls-only concerts or stages as a kind of a “special discipline” which in reality are only serving their own quota justifications exclusively and only deepen the gender gap within the music industry.

And what about the genre “women’s music”? For its disappearance from our minds feminist communities in particular will continue to fight for. That there’s still a lot to do on this front is shown not at least by an invitation to DIVES to play at a certain Viennese “Women’s Stage” at the end of June. Strange, since we are actually musicians.

Viktoria Kirner is bassist and singer with the band DIVES, journalist and a studied lawyer. She is currently writing for C/O Vienna Magazine.

This year’s Pink Noise Girls Rock Camp will take place in Hollabrunn from August 23 to 29.