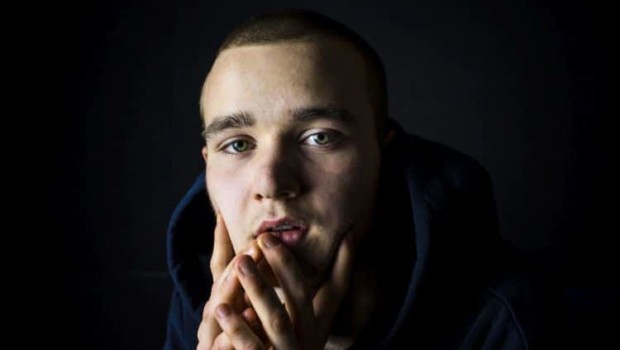 LOU ASRIL, 19 years old, has only talked little about himself or “Divine Goldmine” so far. Stefan Niederwieser spoke with the musician, who gave him his very first interview. Recently LOU ASRIL was announced to play at POPFEST WIEN 2019.

Rhythm and Blues doesn’t have it easy in these parts. Recently there was a flickering of hope, SOLANGE, SZA, FRANK OCEAN, JANELLE MONAE, JAZMINE SULLIVAN, JHENÉ AIKO were cool, while BEYONCÉ, THE WEEKND and DRAKE redefined the mainstream. But in Austria, which otherwise isn’t hesitant to adapt international trends, the feelings have remained silent. Until LOU ASRIL released “Divine Goldmine” (Ink Music) in March 2019.

What or where is “Seidasten”?

What can you do in Waidhofen an der Ybbs?

Lou Asril: I don’t know, I was only born there, I grew up in St. Peter an der Au, then in Seitenstetten.

What can you do in Seitenstetten?

Lou Asril: Not much. I mainly wrote, at the piano, alone. I had eight years of lessons in classical music and seven years in jazz. I only tried to write on the computer a few times.

Were you “Jesus Christ Superstar”?

Lou Asril: Three years ago I played Judas in the musical, I felt more comfortable in the role, vocally, melodically, character wise. I have never sung musicals before, my piano teacher approached me.

How many of your peers do you know that start bands?

Lou Asril: A lot of them, at the musical high school there are at least two bands in every class.

When old people talk about young people, they often pretend that they only want to become influencers and YouTuber.

Lou Asril: There’s both, it works both ways. Influencer doesn’t attract me so much, for me the music is my main focus, I want to convey a message.

Do you belong to the Millennials or to Gen Z?

Lou Asril: Millennials. They go until 2000 I think, when I was born.

Generation Z is considered sincere. Like your songs. Or are these fakes?

Lou Asril: No, they should be real.

How many instruments do you play?

Lou Asril: Only the piano.

How well have you mastered your voice? How would you like to develop it?

Lou Asril: Mistakes happen, but I hit the notes, that works. I sing all day long, my stuff, new stuff, vocally I’ve always done what I wanted to do. I paid attention to my technique, but never adapted to the teachers, almost never did any exercises. But I warm up well before performances.

What do you practice then?

Lou Asril: I’ve been singing R ‘n’ B for the last twenty years. Beyoncé is pretty rad, Destiny’s Child, Fantasia, Daniel Cesar, H.E.R., Sabrina Claudio. But there are many more.

What about metal, folk music, jazz, alternative R ‘n’ B?

Lou Asril: I listen a little to jazz and gospel. Classical soul used to be a lot, sometimes Daft Punk. I would call my music “Alternative R ‘n’ B”.

”Divine Goldmine” got pretty successful on YouTube and Spotify in just a month. How do you feel about it?

Lou Asril: That’s cool. It motivates me to make the next track even phatter. I don’t feel pressure. But it’s quite stressful. I work 40 hours doing community service, going to Vienna takes a lot of time.

How do you feel when someone comments on your video for “Divine Goldmine” with “You are so hot”?

Who is Lou Asril, a person, a band?

Lou Asril: That’s me. First I want to work on getting my name, Lou Asril, out there. A band name can be added later on. But I’m not only going to perform with a band. But the backing vocals should always be live.

Do you write your songs alone?

Lou Asril: Melody and lyrics come from me. Sometimes I get a beat, for example from Robert Wallner, Felipe Kremer and Thomas Bernhard. I write to them.

Lou Asril [laughs]: Some are my friends, others just hit me up. Robert Wallner has spiced up “Divine Goldmine”, he took over some tracks. Piano and bass are recorded. The vocals were recorded again in a studio. They are more intense now, because I learned a lot this year.

The sound is minimalistic, controlled by melody and harmony. Maybe because you write at the piano yourself. Are you there when production happens?

Lou Asril: Sometimes. I can choose parts from different versions and say what I like.

How did you get the idea to do R’n’B? That’s not the typical music when you grow up in the countryside.

Lou Asril [laughs]: I didn’t get the idea, I just made music.

There are few role models for R ‘n’ B in the German-speaking world.

Something must have triggered it.

What was the trigger then?

Lou Asril [laughs]: I can’t say. I just listened to a lot of R’n’B and Black Music. Because I found myself in it, I discovered it for myself, maybe on YouTube, and I kept listening. I guess I was fascinated by the feeling: It’s real, I can let myself go. My first songs weren’t influenced by R ‘n’ B, but by pop, I wouldn’t perform them today. Folk and classical music were played at home.

Do you know a lot of people your age who listen to R’n’B?

Lou Asril: Many of my friends at school listen to it.

It’s not typically cool music, it’s often about being vulnerable.

That would be pretty Generation Z.

In R ‘n’ B the voice often has a lot of melisma, a large range, sometimes almost acrobatic.

Lou Asril: There are artists who do this less, I used to do it more, it has to fit. That’s the hottest thing when someone’s able to do it. But there are people who know how to do that much better than I do.

On a demo song you use words like heaven, devil, soul, quite Christian concepts. Where does that come from?

Lou Asril: I’m not very religious, those come from R ‘n’ B, those are nice pictures, they fuel the imagination.

“I ONLY LISTENED TO ENGLISH MUSIC.”

Could you imagine singing in German?

Lou Asril: Yes, but not now. I can’t even imagine dialect. I have been writing in English ever since the beginning, at the age of eleven. And at that time I only listened to English music.

Could you write a political song?

Lou Asril: Could not, would not want to. Directly related to politics, no. In terms of what’s good and what’s bad, yes.

What else do the demos need?

Lou Asril: They need to be spiced up and need new vocals. But I can’t imagine any of the songs as my next single. There have already been other things which I think are pretty cool.

You won the Joe Zawinul Award when you were 17 and were allowed to go to Los Angeles. What was it like there?

Lou Asril: Cool. I had lessons at the Musicians Institute, different workshops, singing lessons, I still practice with the three hours I recorded there.

“I DEFINITELY WANT TO STAY IN AMERICA FOR A LONGER PERIOD OF TIME.”

So you learned more in Los Angeles than in Austria?

Lou Asril: Could be [laughs]. I played with the musicians of Scott Bradlee’s Postmodern Jukebox. I was there for two weeks, we ate a lot, travelled around. I could imagine moving there, I definitely want to stay in America for a longer period of time.

Why did you choose the label “Ink Music”?

Lou Asril: They are nice people, it just kind of happened. Someone from “Ink Music” went to my concert, we met, texted each other, I sent demos. My booking is there as well. But I don’t really like to talk about contracts.

Are showcase festivals on your radar?

Lou Asril: Yes, I feel ready, but nothing is fixed yet, maybe in autumn.

You like Schmieds Puls, Yasmo and the Popfest Wien. That’s a bit conspicuous.

Lou Asril: Yes [laughs]. I can’t talk about that. [Meanwhile, his appearance at Popfest is official.]

You’ve played the trumpet, trombone and saxophone live. Why not anymore?

Lou Asril: Because it doesn’t fit my sound anymore. It’s too big for the beginning. We used to arrange the songs separately.

Is your album more likely to come next year or the year after?

Lou Asril: I don’t know, it will happen when it’s ready, I don’t think about it too much. I’m not a fan of an EP, that is all i know.

Who are your heroes?

Lou Asril: Beyoncé, in terms of music. My mum. She’s very tough. My immediate family and my friends.

By Stefan Niederwieser – translated from the German article by Dave Dempsey

After this interview, on July 5, Lou Asril´s second single “Soothing Moving” was released and he was chosen as the Radio FM4 Soundpark Act of the Month in July.